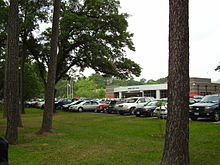 Memorial serves students in portions of the Memorial and Spring Branch regions of Houston and several enclaves within the portions. Memorial is part of the Spring Branch Independent School District and serves grades 9 through 12.

Memorial Senior High School opened in 1962 to relieve overcrowding at Spring Branch High School. Memorial was the second high school to open in the Spring Branch Independent School District. At the time, students living north of Old Katy Road would attend Spring Branch and students living south of Old Katy Road would attend Memorial. This arrangement lasted until Spring Woods High School opened in 1964. The design of the school was classic early 1960s in the South, with a large, open campus. Each classroom building opened into an outside breezeway, to maximize air flow as the school did not have air conditioning. When Memorial first opened, the area surrounding the school was largely forest and rice fields, but it rapidly grew as new subdivisions were built, and by the mid-1960s, Memorial's enrollment exceeded 3,000 students, a number much larger than the school was meant to hold. This problem was resolved with the opening of Westchester Senior High School in 1967, and later Stratford Senior High School in 1974. At the time, Memorial's main rivals were the Spring Branch Bears and Westchester Wildcats. However, by the mid-1980s, the enrollment of nearly every school across the district had dropped precariously, and it was decided that Westchester and Spring Branch High Schools would be closed. Memorial remained open, and took in students from both Westchester and Spring Branch High Schools.

Today, Memorial is the oldest high school still operating in Spring Branch ISD. The school has received extensive renovations, which began during the 1996–1997 school year. Every building in the school was gutted and refurbished, outdated facilities were replaced and the campus was made more secure.

Memorial serves students in all of the Memorial Villages (including Bunker Hill Village, Hedwig Village, Hilshire Village, Spring Valley Village, and most of Hunters Creek Village and Piney Point Village). While the school has a Houston address, it is located in the city of Hedwig Village and it draws from a small portion of Houston in the Memorial and Spring Branch regions (including Afton Village, Brykerwoods, Monarch Oaks, Spring Oaks, Sandalwood, Whispering Oaks, and portions of Westview Terrace).[2] A section of the Memorial City district is within the school's attendance zone.[3]

Memorial has a rivalry with Stratford High School.[4] Memorial also went to the state semifinals in December of 2010.

It was awarded five stars and ranked in the top ten high schools in Texas by Texas Monthly magazine in 2002.[16] test

Elementary schools that feed into Memorial High School include:[17]

Middle schools that feed into Memorial High School include:[17]