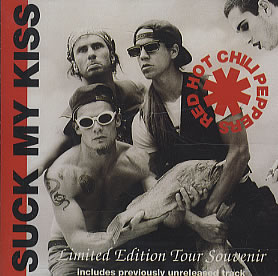 "Suck My Kiss" is the fourth single from the ' fifth studio album "" released in 1991. "Suck My Kiss" was released as a single in 1992 and a was made using footage from the "" documentary directed by Gavin Bowden. The song was included on the band's "Greatest Hits" compilation, being one of only two tracks on the CD to represent the Red Hot Chili Peppers' classic funk-rock music style (The other being "Give It Away").

additionally uses a censored version of this song as a playable Co-op track, as well as for the Blood Sugar Sex Magik DLC.

The song was also used in an episode of .