Mansa
This article is about the Mandinka word. For other uses, see Mansa (disambiguation). 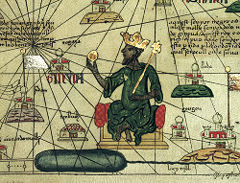 Depiction of Mansa Musa, ruler of the Mali Empire in the 14th century, from a 1375 Catalan Atlas of the known world (mapamundi), drawn by Abraham Cresques

Mansa is a Mandinka word meaning "king of kings". It is particularly associated with the Keita Dynasty of the Mali Empire, which dominated West Africa from the thirteenth to the fifthteenth century. Powers of the mansa included the right to dispense justice and to monopolize trade, particularly in gold. Mansa Sundiata was the first to assume the title of mansa (emperor), which was passed down through the Keita line with few interruptions well into the 15th century. Other notable mansas include his son Wali Keita and the powerful Mansa Musa (Kankan Musa), whose hajj helped define a new direction for the Empire. The succession of the Mali Empire is primarily known through Tunisian historian ibn Khaldun's History of the Berbers.