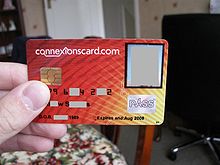 The Connexions Card was a smart card for 16-19 year olds in England for rewarding students who turned up to lessons, work-based training and other activities with points that could be redeemed for discounts on consumer goods listed on the Connexions website,[1] bus journeys[2] or suitable goods in local retailers.[3]

The seven year contract to run the Connexions Card was won by Capita,[4] signed in July 2001,[5] and operated as a Public-Private Partnership with a budget of £109million.[6]

An official evaluation of the program completed in September 2004[13] concluded that the program had fallen far short of its aims (eg 1.7 million young people using the card in a steady state) and there was no clear evidence of a direct impact on attitudes to attendance, learning or career choices. Indeed, the only young people to use the cards were those who didn't have a problem in the first place.[13] The inflexible contract with Capita was also singled out as a barrier to targeting the product more effectively. And, as predicted,[14] the system where students had to swipe their cards through a reader connected to Capita's central database at the beginning of every lesson (in addition to the school keeping its own attendance register) was a disaster.[13]