High Point is known for its furniture, textiles, and bus manufacturing. The city is sometimes referred to as the "Furniture Capital of the World" although its official slogan is "North Carolina's International City" due to the semi-annual High Point Market that attracts 100,000 exhibitors and buyers from around the world. The area code is 336.

It is home to High Point University, a private Methodist-affiliated institution founded in 1924.

Most of the city is located in Guilford County, with portions spilling into neighboring Randolph, Davidson, and Forsyth counties. High Point is North Carolina's only city that extends into four counties.

Among the first Europeans to settle Guilford County were Quakers and German immigrants. High Point was located at the highest point of the 1856 North Carolina Railroad between Charlotte and Goldsboro where it intersected the 1852 Great Western Plank Road. Its central location and transportation allowed for the delivery of raw materials like cotton and lumber and processed goods in and out of the city and contributed to its early growth. Settled before 1750, High Point was incorporated in 1859. Before it became a major manufacturing center, the most important industries were tobacco, woodworking and textiles. The first of many High Point furniture factories was opened in 1889.[3]

High Point's conception is not solely linked to manufacturing; it is also tied to religious freedom beginning as early as the mid-eighteenth century as a refuge for Pennsylvania Quakers who came to the region in search of affordable land, good climate, and an opportunity to create a principled and ordered community. Members of the Society of Friends held beliefs that many considered heresy in the late eighteenth century. Central to these core convictions were values of community and equality that led to the development of specialized trades and early educational systems that were the foundations for the future growth of the region.

Since its incorporation, High Point has been an ambitious city. Whether rallying around Union carpetbaggers in the 1870s and textile barons in the 1910s, or planning public parks in the 1930s, the city has always been forward looking in its prospects. City historians such as J. J. Farriss, Stephen C. Clark, Frank Sizemore, and Holt McPherson have proudly documented the city’s past as if writing a user’s guide for building a model city. Memorialized in numerous successful businesses and family fortunes, this ambition also is recorded in the city’s architecture. 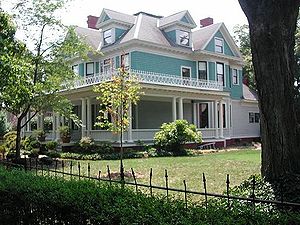 Reflecting the city’s growth and influence is an architectural inventory increasingly representative of High Point's civic pride and cultural sophistication. Since early settlement, hotels and merchant-houses presented fashionable façades to visitors and discerning shoppers. Later, wealthy industrialists had ambitious houses and churches erected in popular styles that illustrated the growing town's sense of style. Finally, civic projects such as schools and public works were built in increasingly popular and modern designs in a way that spoke to High Point's progressive spirit and quickening pace. By the middle of the twentieth century, High Point had assembled an impressive collection of architecture representing nearly every popular style since the city was founded, some designed by nationally recognized architects and planners.

Within the twenty-first century, increasing influence has been found in the city's institutions of higher education. Established in 1924, High Point University is a liberal arts institution with approximately 3,000 undergraduate and graduate students from 52 countries and 36 states at campuses in High Point and Winston-Salem. It is ranked by U.S. News and World Report 6th among comprehensive universities in the South and in the top 100 nationally. The university offers 45 undergraduate majors and five graduate-degree programs. It is accredited by the Commission of Colleges of the Southern Association of Colleges and Schools, and is a member of the NCAA, Division I and the Big South Conference.

High Point is the only city in North Carolina that exists within four counties: Davidson, Forsyth, Guilford, and Randolph. It also stands within two major watersheds: The Yadkin-Pee Dee and the Cape Fear. Parts of the city rise above 1,000 feet (300 m), making it among the highest cities in North Carolina's Piedmont.

The climate in High Point is humid subtropical, with four seasons. Summers tend to be hot and humid, with the dewpoints rising to low and mid 70s during July and August. Fall and spring are mild. Winters are cold at night and mild during the day, but only a few days every winter does the temperature drop below -4 °C. Rainfall patterns are generally spread evenly throughout the year, with between six and nine wet days per month. Snowfall is unpredictable, with some winters experiencing little or no measureable snow and others characterized by occasional ice storms with small accumulations of snow and ice. January lows average -1 °C (30 °F) and highs average 10 °C (50 °F). July lows average 19 °C (67 °F) and highs average 32 °C (89 °F) although during heat waves, summer highs can cross 40 °C (104 °F). The lowest temperature ever officially recorded for the city was -22 °C (-7 °F), and the highest temperature ever recorded was 41 °C (106 °F). High Point has a humid subtropical climate, though being located between the mountains and the ocean it experiences less temperature fluctuation than other areas.

High Point was one of several communities impacted by a March 2010 Carolinas tornado outbreak. The twister reached its most powerful EF3 classification as it crossed the northern suburbs of the city.

In 1989, High Point sustained minor wind damage from Hurricane Hugo as it raced through the western Piedmont Plateau of North Carolina after making landfall 5 hours away in Charleston, South Carolina.

There were 33,519 households out of which 32.9% had children under the age of 18 living with them, 46.9% were married couples living together, 16.3% had a female householder with no husband present, and 32.8% were non-families. 27.2% of all households were made up of individuals and 9.5% had someone living alone who was 65 years of age or older. The average household size was 2.49 and the average family size was 3.03.

Once synonymous with furniture, hosiery, and Hatteras yachts, High Point has diversified its economy as a center for distribution and logistics, customer service and banking, manufacturing, photography, and pharmaceuticals. The High Point Market remains a centerpiece to High Point's economy and the city's most recognized industry. The trade show is the largest furnishings industry trade show in the world. Approximately 12,000,000 square feet (1,100,000 m2) of showroom space is used by 2300 exhibitors, in 188 separate buildings.

The High Point Market has been noted for being a significant part of the region's larger furniture "cluster," which was discussed most recently by sociologist Richard Florida[8] and initially by economist Michael Porter.[9] The Market and its effects on the city have also been the focus of an extensive case study by urban sociologist John Joe Schlichtman.[10] In this research, High Point's ability to capture the global furniture merchandising market is said to signal a new era in what is possible for small cities.[11] Along these lines, Schlichtman terms High Point a "Niche City," which is "a city that forges global centrality by creating an economic specialization in a specific segment of the global service economy."[12] In 2005, High Point adopted "North Carolina's International City" as its official slogan, emphasizing the role of international business and especially the High Point Market (formerly called the International Home Furnishings Market), the largest furnishings industry trade fair in the world. 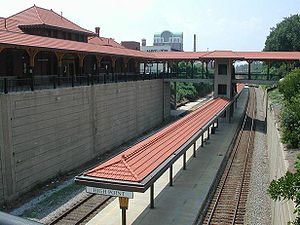 Interstate 85 runs through southern High Point, southeast of the original interstate roadway, which is now designated Business 85. In the future, the new Interstate 74 will run north and east of the city. This section is referred locally as the "East Belt" freeway project, with construction scheduled to be completed after 2011. Part of this freeway is already built, and is signed U.S. Highway 311.

Highways passing through High Point include: 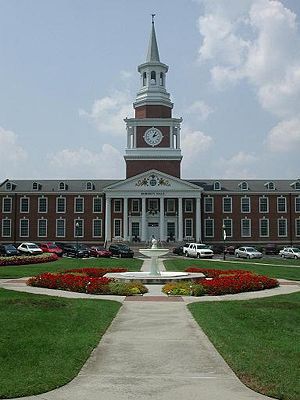 Private schools for the education of children were established in and around High Point as early as the early nineteenth century by Quakers. The New York Yearly Meeting of the Society of Friends, a network of Quakers from that state, started a school in Asheboro in the 1880s for African American students. The school relocated to High Point in 1891 on land east of town on Washington Street. The institution was named the High Point Normal and Industrial School (later William Penn High School), and was administered by the Quakers until 1897. In that year, black educator Alfred J. Griffin accepted the position of principal and led the establishment into a long period of growth.

The High Point public school system was founded in 1897 with the approval of a $10,000 bond, in part to finance the purchase of J. Elwood Cox’s family home on South Main Street for use as the first school building. Twelve school commissioners were appointed to administer the 350-student system of five grades. Growth of the city’s institutions reflected improved primary educational facilities. A school building campaign coupled with additional grades and improved classes resulted in four additional schools for white students: Elm Street School (1905), Park Street School (1910), Fairview School (1910), and Grimes Street School (1911). Many other schools were all born in the 1920s during a period of rapid growth.

This building spree culminated in 1927 with the opening of High Point High School. Among the many high styled school complexes in the state, few surpass High Point’s grand 1927 high school. The campus joined the talents of two designers; Greensboro architect Harry Barton and Charlotte landscape architect Earl S. Draper. The building was matched in 1931 with the addition of Ferndale Middle School just to the east, designed to incorporate details from the high school so that it maintained a campus theme. Both shared athletic facilities on a large tract of land between downtown and Emerywood. An additional high school, T. Wingate Andrews High School, was established in the 1960s.

In 1921, the Chamber of Commerce made the establishment of a college in High Point a high priority and initiated a High Point College campaign. The campaign solicited funds in order to attract the attention of the North Carolina Methodist Protestants, who had desired for decades to found a college.

High Point succeeded in attracting the college over rivals Greensboro and Burlington with a gift of 60 acres (240,000 m2) and $100,000 in pledges from leading citizens. High Point College opened in 1924 (changed to High Point University in 1991) with three buildings at various stages of development. Many of the numerous civic organizations founded in the 1920s pledged funds, including the Rotary, Kiwanis, Civitan, and the American Business Club. The architectural design of the High Point College campus was in keeping with traditional and historical architectural initiatives found at many private colleges and universities across the state in the 1920s. The administration building (Roberts Hall), male and female dormitories (McCulloch Hall and Women’s Hall, respectively), and a central heating plant were all erected between 1922 and 1924 according to designs by Washington, D.C., architect R. E. Mitchell with assistance by High Point architect Herbert Hunter. Today, High Point University is a four-year, coeducational, liberal arts university related to the United Methodist Church. It offers 50 majors in a traditional day format. It also offers non-traditional Evening Programs, and the Graduate Studies offers four Master's degrees and six programs.

High Point is also the home of John Wesley College, as well as one of the nine Shaw University "CAPE" (College of Adult and Professional Education) program centers.[14]

The High Point Enterprise, established in 1885, is the only daily newspaper published in High Point. HP Magazine is a full color glossy lifestyle magazine that offers stories on food, history, events, the furniture industry, and more. The monthly magazine is the city's largest locally owned publication. Greensboro's News and Record also is available in High Point. Yes! Weekly and the Rhinoceros Times are free weekly papers covering High Point. 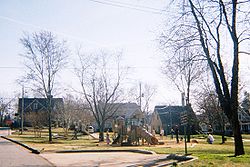 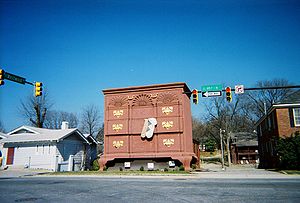