The Championship of Australia was the name given to an Australian rules football tournament which was contested between football clubs from the Victorian, South Australian and West Australian football leagues. The Championship took place three times in the 19th century and then from 1907 to 1914 with the exception of 1912 and every year from 1968 to 1976. All but two of the Championships were played in Adelaide and all of them occurred after the respective league seasons had ended. 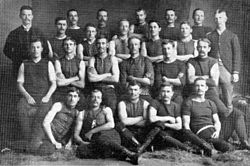 Norwood won the inaugural Championship of Australia in 1888

The first group of Club Championships were between the Victorian Football Association and South Australian Football Association premiers while from 1907 until 1914, the final competition for 54 years, it was contested between the premiers of the VFL and SAFL. Port Adelaide were champions a record four times during this period. The inaugural Championship was a best of three game series but all future tournaments were decided by a Grand Final.

In 1968 the Championship returned under the same format but the Australian National Football Council refused to grant it official status as a team from Western Australia and Tasmania were not competing and it thus couldn't be referred to as a Championship of 'Australia'. Both state's premiers joined the tournament from 1972 onwards to make it a four club championship. For Tasmania it was the premier of the Tasmanian State Premiership that was invited to the Championship although in 1974 a composite team of players from the premier clubs of the various Tasmanian leagues which took part. VFL clubs won every Championship from 1968, except in 1972 when South Australia's North Adelaide Football Club upset Victoria's Carlton Football Club to win by a point.[1]

The final Championship, in 1976, was known as the NFL Wills Cup and was played under a new format. In an extended competition there were a total of 12 clubs, five from the VFL, four from the SANFL and three from the West Australian National Football League. They were divided into four groups of three and the winners of each group met in the semi finals.

Although the NFL Championship was played again in 1977, no clubs from the VFL took part as they were competing in the Night Series, a new tournament which began to offer a similar format which spelled the end of the Championship of Australia.[2]

Until the nationalisation of the VFL in 1990 to become the Australian Football League, the Championship of Australia was effectively the premier national club competition.

* During the 1890s behinds, although recorded, were not added to a team's score as whoever kicked more goals won the game.
** Night Game 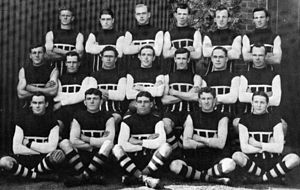