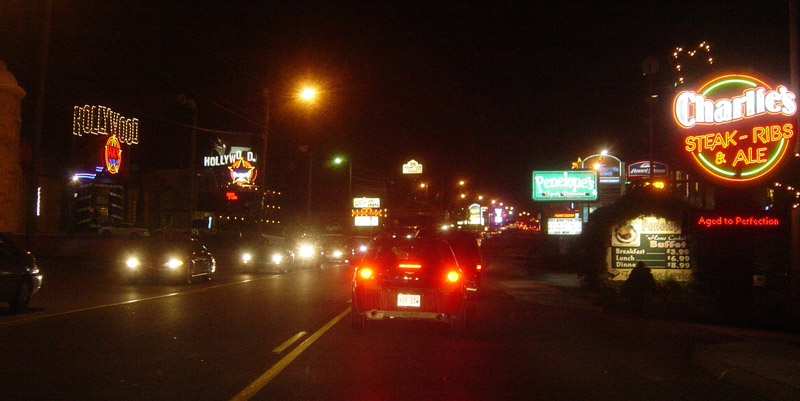 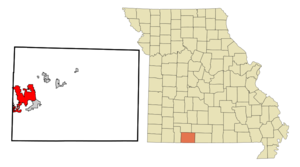 Branson is a city in Stone and Taney counties in the of . It was named for Rueben Branson, and operator of a in the area in the 1880s. [ [http://www.lonelyplanet.com/destinations/north_america/branson/history.htm Branson Travel Guide and Travel Information - Lonely Planet ] ] Branson is a popular destination for vacationers from Missouri and the surrounding states. The population was 6,050 at the 2000 census. The Branson Micropolitan Statistical Area embraces Stone and Taney counties.

In 1882, Rueben Branson opened a general store and post office in the area. Branson was formally incorporated in 1912 and construction of the Powersite Dam nearby on the White River which would form was completed.

In 1894 William Henry Lynch had bought and had begun charging visitors to see it. Hugo and Mary Herschend bought the cave in 1950 and began hosting s in it. The Herschend Family modernized the cave with electricity and cement staircases, and in 1960, the Herschends opened which was a recreated frontier town of five shops and a church, and it featured a log cabin with actors playing out the feud between .

had published his novel about the Ozarks, , in 1907. The Old Mill Theater began its first outdoor production based on the novel in 1960. The show still runs today.

1963 saw the completion Table Rock Dam on the White River, which created .

The Presley family became the first to move their show to Highway 76 in 1967 (which would become known as the "strip"), and a year later, the Baldknobbers moved their show there as well. This area would eventually grow to more than 50 theaters &ndash; most located on Highway 76.

In 1983 Branson began its transformation into a major tourist attraction when the 7,500 seat Swiss Villa Amphitheatre opened in . The theatre, which was later renamed the Black Oak Mountain Amphitheatre before utlimately closing in the early 2000s, proved there was a market for large music gatherings. Ironically, it started out as a venue for rock bands , , , , and . [ [http://www.ky3.com/home/related/5937001.html Fire damages former concert stage in Stone County - ky3.com - , ] ]

Also in 1983, opened the , becoming the first famous country music star to have his own venue in Branson. Many of performers that have played in Branson, got their first start at that venue. A series of larger theatres opened soon thereafter. In 1987, became the first entertainer with a permanent schedule in Branson.

In 2007, ground was broken for the $155 million on land formerly belonging to . Scheduled to open in May 2009, it is claimed that it will be the largest privately-owned commercial airport in the United States. The construction which involves flattening several Ozark mountains is said to be the largest earth moving project in Missouri history. Currently the closest commercial airport is 50 miles northwest of Branson. That airport is totally owned by the City of Springfield.

Branson is home to more than fifty theaters, featuring numerous shows and productions.

Branson is also the home for several museums, three lakes, and twelve championship golf courses. Other local attractions include , , , an Theater, , , , , and .

The opened in 2006 and includes artifacts from the wreck of the . Also on display are models of the ship, a full scale replica of the grand staircase and recreations of various rooms of the ship, in addition to eye-witness accounts of the events that occurred. And there are tiled planks of decks to see what it feels like during the sinking.

[http://www.bransonlanding.com/ Branson Landing] opened in the summer of 2006 on the waterfront in downtown Branson. The lakefront project includes retail space with and as anchors in an outdoor shopping mall of over stores and restaurants. The new , which is situated between the Landing and , opened , .

Developers are laying out plans for Pinnacle Falls to be located adjacent to off of Highway 76. The first Phase, a $250 million dollar European-themed development, is planned to open in 2010 and will contain year-around attractions including an indoor water park, aquarium, themed restaurants, and shopping.