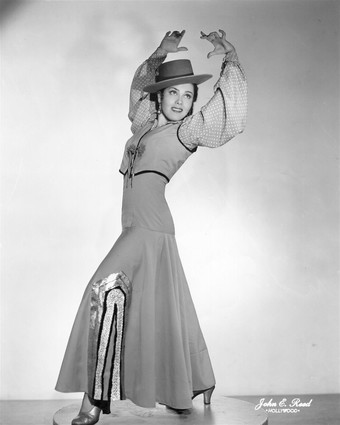 Lola Montes is the stage name used by Chita Equizabal (born Gertrude Tashma), a Spanish dancer who performed throughout the United States for nearly 70 years.

Equizabal, the daughter of poor Russian immigrants, grew up in New York City with a passion for dance. She attended ballet school in the city and received training in Spanish dance. At age 15, she began dancing professionally when she was hired at a Greenwich Village nightclub. With her father's help, she had her name legally changed to Chita Tashma.

As her talent grew, she became the first American to work with Carmen Amaya, a renowned gypsy dancer. Touring with Amaya's company, she met her first husband (and dance partner), Antonio Triana. After arriving in California during the 1940s, the couple appeared in a number of Spanish-themed films (including "The Gay Señorita," "The Lady and the Monster" and "The Bridge of San Luis Rey"). The couple divorced in the 1950s. She later went on to marry a Spanish nobleman, Luis Equizabal, who had left Spain during its civil war. They remained married until his death in Los Angeles in 1980.

In 1955, Equizabal started her own dance company, Lola Montes and Her Spanish Dancers. The company toured throughout the United States and Canada for over two decades. In 1974, the Lola Montes Foundation for Dances of Spain and the Americas was established. The foundation was focused around the preservation of Spanish dance through community and educational outreach. Throughout this entire period from 1955 until her last performance in 2000, Equizabal acted as tour manager, choreographer, teacher, wardrobe supervisor for her dancers.

During her career, Equizabal received numerous civic awards. She was an active member of her community, as a long-time member of the and the , serving as a member of the 1984 Los Angeles Olympics organizing committee and acting as president of the Los Angeles Area Dance Alliance in 1985. Her legacy is carried on by her many students, most notably Oscar Nieto an award-winning flamenco dancer in Canada, who is producing a documentary on the life and career of Equizabal.