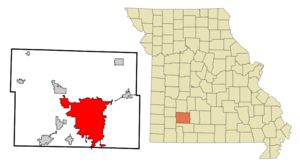 Springfield is a city in Christian and Greene Counties in the of . On July 1, 2006, its estimated population was 150,797, of whom 150,790 lived in Greene County and 7 lived in Christian County, [http://factfinder.census.gov/servlet/GCTTable?_bm=y&-geo_id=04000US29&-_box_head_nbr=GCT-T1-R&-ds_name=PEP_2006_EST&-_lang=en&-format=ST-9S&-_sse=on United States Census Estimates 2006] making it the third largest in Missouri. It is the of Greene County.GR|6 The Springfield Metropolitan Statistical Area includes the counties of Christian, Dallas, Greene, Polk, and Webster. According to Forbes Magazine's list of "America's Wildest Weather Cities," Springfield is the city with the most varied weather in the nation. [cite news |title=In Pictures: America's Wildest Weather Cities: No. 9: Most Variety (biggest variations in temperature, precipitation, wind), Springfield, Mo. |first=Tom |last=Van Riper |work=Forbes |url=http://www.forbes.com/2007/07/20/weather-storms-united-states-biz-cx_tvr_0720weather_slide_10.html?thisSpeed=15000 |date=2007-07-20 ]

During the Civil War, Missouri was divided and a number of battles were fought in the Ozarks. Springfield itself saw a short but violent clash in 1863. Following the Civil War, Springfield saw some growth from Westward expansion. In 1865 the first “quick draw” duel of fame took place on the town square when killed Davis Tutt Jr. The first train of the , which became the St Louis-San Francisco Railway or "," arrived in 1870. This led to rapid growth and for many decades Springfield prospered as an important railway junction.

In 1906, a mob broke into the town jail and three men, Horace Duncan, Fred Coker, and Will Allen. They were hanged and burned by a mob over 2,000 strong without trial in the town square. This event sparked a mass exodus of African-Americans from the area, who still remain an extreme . A small plaque on the south-east corner of the square is the town's only reminder. The men were hung on the town square from a tower which held a replica of the . In the immediate aftermath, two commemorative coins were minted celebrating the lynching.

The origin of the name "Springfield" remains unclear. Writing in 1883 the historian R. I. Holcombe states, "The town took its name from the circumstance of there being a "spring" under the hill, on the creek, while on top of the hill, where the principal portion of the town lay, there was a "field"." He goes on to note, "This version of the origin of the name is disputed by the editor of the Springfield Express, Mr. J. G. Newbill, who, in the issue of his paper, November 11, 1881, says: 'It has been stated that this city got its name from the fact of a spring and field being near by just west of town. But such is not a correct version. When the authorized persons met and adopted the title of the "Future Great" of the Southwest, several of the earliest settlers had handed in their favorite names, among whom was Kindred Rose, who presented the winning name, "Springfield," in honor of his former home town, Springfield, Robertson county, Tennessee.'" [http://thelibrary.springfield.missouri.org/lochist/history/holcombe/grch29pt1.html] The most common view is that the city was named for . One story is that a man named James Wilson, who lived in the then unnamed city, offered free whiskey to everyone who would vote for naming it after his home town of Springfield, Massachusetts. [Dark, Phyllis & Harris. "Springfield of the Ozarkas: An Illustrated History." Windsor Publications, 1981. ISBN 0-89781-028-7.]

In 2003, the city council of Springfield prohibited smoking in restaurants except for specific listed exceptions. [http://www.ci.springfield.mo.us/egov/minutes/smokeord_sum.html]

In November 2004, voters turned down a plan to fund a new coal-fired power plant in the city. Many voters who were polled stated concerns about the pollution that a new coal power plant would cause. The power plant bond issue was again placed on the ballot for the residents within the city limits to decide in June, 2006, and was approved.

In August, 2005, Springfield announced plans to annex a large chunk of southeastern Greene County. Plans called, if necessary, to force the area into the city. The annexation was called off after an agreement was reached with Rogersville to the east which also filed to annex the same area. Annexation has become a controversial issue in recent years, causing a lawsuit with neighboring Brookline.

In November 2006, voters established a "bar ban" for anyone under 21. Those under 21 are (according to the bill) not allowed in any bar or restaurant that makes most of their profit by selling alcohol, after 9pm. This caused an uproar with the college students from Missouri State, Drury, and other schools, who pointed out that since most bars were strict on checking IDs, underage adults visited the bars to support local music and sober drive for older friends.

Colleges and universities located in Springfield include (until 2005 it was known as Southwest Missouri State University, or SMSU), , , , (known as Drury College until 2000) (which was attended by ), (until 2000 it was known as Evangel College, or EC), , , St. John's College of Nursing and Health Sciences of , Vatterott College, Everest College, Cox College (Nursing School), , and Bryan College. There are also three Cosmetology Schools, Academy of Hair Design, The System (A Paul Mitchell School) and Missouri College of (A Pivot Point School)

In June 2008, ranked Springfield tenth on a list of Worst Cities to Raise a Family in America. [http://www.bestlifeonline.com/cms/publish/family-fatherhood/The_100_Best_Places_to_Raise_a_Family.shtml.] The magazine article does not explain what data was analyzed or how it was analyzed to make this determination.

named Springfield among "The Best Cities for Relocating Families" in 2007. [http://www.business4springfield.com/demographics/recognition/erc.pdf]

Springfield was recognized by the "World Health Organization" as a "Safe Community." [http://www.phs.ki.se/csp/safecom/springfield.htm]

The following national firms are headquartered in Springfield:

Springfield is served by Interstate 44 which connects the city with St. Louis and . U.S. Route 60, U.S. Route 65, and U.S. Route 160 pass through the city, and formerly U.S. Route 66 and U.S. Route 166 also passed through the city. Portions of the historic US 66 can still be seen in portions of the city. US 166's eastern terminus was once located in the northeast section of the city, and US 60 originally ended (westbound) in downtown Springfield. US 60 now goes through town on . Route 13 carries traffic north towards Kansas City. Major streets include Glenstone Avenue, Sunshine Street, National Avenue, Campbell Avenue, Kansas Expressway, Battlefield Road, Republic Road, West Bypass, Chestnut Expressway, and Kearney Street.Springfield also has public transportation operated by City Utilities that serves most areas inside the city limits in its fleet of biodiesel-fueled busses.

The Railway has a major hub operation in Springfield. Mainlines to and from Kansas City, St. Louis, Memphis and Tulsa converge at the railroad's yard facility in the north part of the city. The also operates several miles of (former ) industrial trackage within the city. Springfield was once home to the headquarters and main shops of the St. Louis-San Francisco Railroad (Frisco). The Frisco was absorbed by the in 1980. The BN subsequently merged with the Santa Fe in 1994, creating the current (BNSF) Railway.

65-plus freight trains travel to, from, and through the city each day. In October 2006, BNSF announced plans to upgrade its Tulsa and Memphis mainlines into Springfield to handle an additional four to six daily between the West Coast and the Southeast. Passenger trains have not served Springfield since 1967. However, in 2006 the and began studying the possibility of restoring service to the city from St. Louis. The proposed service would utilize the current BNSF "Cuba Subdivision" mainline between the two cities via .

serves the city. It is the principal air gateway to Springfield and Branson.