The village of Cheveley is situated in the county of Cambridgeshire and lies about four miles east-south-east of the market town of Newmarket. Cheveley falls within the local government district of East Cambridgeshire. Geographically, Cheveley stands on the third highest point in Cambridgeshire at 127 metres (417 ft) above sea level. The attractive hamlet of Cheveley Park is a mile from Cheveley.

Children initially attend the primary school in the village, with many then going on to the nearby secondary school Bottisham Village College.

Land use in Cheveley

The trees of the Duke of Rutland's old park, a ducal domain no more, spread over into the roadway and gardens of this wooded outpost of the county near the Suffolk border. A linear village, Cheveley's non-residential land-use consists almost entirely of paddock land used by studs, the most notable being the Cheveley Park Stud after which the Cheveley Park Stakes are named. See thoroughbred breeding.

By the road outside the church, in memory of the men who did not come back, stands a soldier with bowed head in a niche below a cross. The Jacobean Rectory has great (possibly 18th century) iron gates, said to have come from the Alington family's seat at Horseheath. 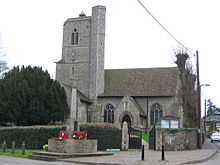 The fine aisleless church, in the shape of a cross, has a 600-year-old tower beginning square and ending with eight sides, a turret rising from the ground, with a winding stairway to the belfry and a summit once used for beacon fires. The fine arches with clustered pillars on which the tower rests are the glory of the church indoors, recalling the days when there were four guilds here, each guild keeping a light burning on these piers. Three of the four brackets for the lights are still here, one carved with a face and one a grotesque little fellow with his legs doubled behind him.

The church belongs to England's three great building centuries, and still has the oak screen set in its chancel arch 600 years ago. The choir-stalls are 'modern' with fine carvings of dogs, fishes, birds, bats, dragons, and a wolf. There are two Jacobean chairs, and a richly inlaid one of cypress wood, the seat opening to form a chest; it is thought to be the throne of a Venetian Doge of the 14th century. A little glass in a transept window is older still. The painted font is 19th century, most unusual in its blaze of colour, a new dress in mediaeval style.

Under an arch on the chancel wall is one of the Folkes family, in a red cloak, reading a book. He died in 1642. There is a memorial to James Hand, who was Rector for 49 years until 1830.

There are some pictures and a description of the church at the Cambridgeshire Churches website [1].

Presently, Cheveley has many local amenities. The recreation ground provides an off road field, where cricket, football and mere dog walking take place. The Red Lion public house is situated to the south of the village. The local village store, Cheveley Post Office is situated opposite the Red Lion pub.