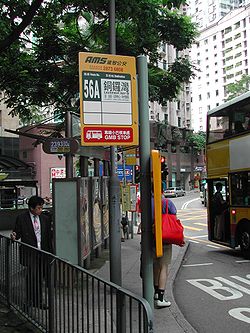 A new style of minibus stops seen on Robinson Road in the Mid-levels of Hong Kong.

A Public light bus is a common public mode of transport in Hong Kong. It mainly serves the area that standard Hong Kong bus lines cannot reach as efficiently. It is also colloquially known as a minibus or a van, defined as a kind of share taxi.

Minibuses carry a maximum of 16 seated passengers; no standing passengers are allowed. Minibuses typically offer a faster and more efficient transportation solution due to their small size, limited carrying capacity, frequency and diverse range of routes, although they are generally slightly more expensive than standard buses. The popularity of public light bus services in Hong Kong is due to the high population densities which are needed to support the extensive network of minibus routes.

There are two types of public light minibus, Green minibuses and Red minibuses. Both types have a cream coloured body, the distinguishing feature being the colour of the external roof, and the type of service that the colour denotes. In the past, the minibuses had a band of red or green painted around the body instead of colouring the roof.

Most of the minibus are Toyota Coasters, but a new and environmentally friendly Iveco Daily Green minibus has also been introduced to reduce air pollution. Most of the buses run on Autogas (liquefied petroleum gas or LPG). This type of fuel is not only cheaper, but also reduces emissions. The transport commission is making further efforts to reduce emissions by providing incentives for bus drivers to make the switch to even more efficient electric vehicles.

By 2005, there are 4,350 public light buses in Hong Kong, of which 1,660 are red minibuses (RMBs) and 2,690 are green minibuses (GMBs). The operations of these two types of services are regulated through conditions imposed by the Commissioner for Transport under the passenger service licences (PSLs). 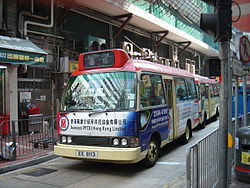 The Public light bus service started as a result of the 1967 Hong Kong riots.[1] Workers of China Motor Bus and Kowloon Motor Bus were incited to go on strike. During the riot, buses and trams were not available and the territory was ground to a halt.[1]

The buses can also be traced back to a local minibus system (黑牌車) used in the New Territories prior to 1960s. They were allowed to operate in the urban areas of Hong Kong after 1967 to ease commuter chaos.[2]

At the time people with mini-vans provided transport to the public for a small charge. The government turned a blind eye even though it was against traffic laws to carry passengers without a passenger service licence. The 1969 legislation legalising the service making some 5,000 licences available for drivers caused some controversy. Some believed it was wrong of the government to issue licences to people who had been profiting from an illegal activity.[1]

The first generation light buses were vans carrying nine passengers. The buses had a black and white checkered stripe and was colloquially referred to as the zebra car (斑馬車).[2] This design later gave way to the red striped vans (colloquially as "red bus" or "14 seat") of today. Seating increased over the years to 14 and finally to 16 seats.[2] Earlier minibuses featured a door on the front passenger side.[3] The destination signage at the top front of minibuses did not appear until 1977 and the rear bench seat disappeared altogether following the installation of air conditioning.[2]

A passenger wishing to get on a minibus simply hails the minibus from the street kerb like a taxi. A minibus can generally be hailed down at any point along a route, subject to traffic regulations, although sometimes particular stops are marked out. To alight from a minibus, a passenger customarily calls out to the driver where they wish to get off. The driver then raises his hand to acknowledge him. Tourists are often confused by the calling system, as one must know the route somewhat well to know when to call. Passengers often call out landmarks, intersecting streets and other distinctive features (such as immediately before or after a no-stopping zone). Some Green minibuses are now equipped with a bell operated similarly to those found on the larger buses, and ringing it indicates that a passenger requests the next stop. However, calling out to the driver is still the dominant method of letting the driver know that a passenger wishes to get off the minibus.

Green minibuses operate a scheduled service, with fixed routes and fixed fares. There are currently around 250 green public light buses routes with route numbers assigned. The exact fare must be tendered, or payment can be made by Octopus card. On some routes, passengers may pay a portion of the full fare (called section fare) if they are only travelling a section of the route. Sections are usually distinctive physical landmarks, such as crossing a tunnel or a bridge.

Red minibuses run a non-scheduled service, although many routes may in effect become fixed over time. Red minibuses may operate anywhere where no special prohibitions apply, without control over routes or fares. The operation of red minibuses provides services according to market demand.

On some routes red minibuses may run through the whole day (24-hour service), such as Tai Po-Mong Kok, Tsuen Wan-Kwun Tong, Kwun Tong-Mong Kok, Yuen Long-Jordan Road etc. Other routes may only run as midnight services, such as from Yuen Long-Causeway Bay.

In most red minibuses, passengers pay just before they alight, and change for cash payment may be available, or may have a small amount deducted off the amount of change for the inconvenience (of giving change). Only a few red minibuses are equipped to accept payment by Octopus card. Red minibuses' fares and timetables are not regulated by the Government, and so, may occasionally be more expensive than their Green counterparts.

When travelling on a red minibus, the destination shown on the destination box may be an historical name of a place or a building which no longer exists "大丸" (Previous Japanese-owned department stores "Daimaru"). In the New Territories, they usually display Sheung Shui, Castle Peak Road (and other busy roads), or Tai Po, etc., and sometimes carry a number. This number is a legacy of the pre-1973 route numbering in the New Territories. In those days red minibuses would carry a number indicating that it would travel on essentially the same route as bigger buses with that route number.

Most early public light buses used British vehicles, but Japanese minibuses appeared in 1969 and finally dominated the fleet by the 1980s.

Some Green Minibus Unions have called for the Government to provide a new fleet of buses which can hold up to 20 people, 4 more people than the current 16 people. They say it could help ease traffic congestion during rush hour and possible push up profits which may turn away possible fare increases. There are a few of the new buses in service at the moment, but because it is only legal to have 16 passengers in a minibus, the extra area is used as a luggage rack. The Government has responded saying that minibuses are a secondary form of transport, therefore a expansion would not be required.

As routes are not tightly regulated, the flexibility of routes is higher than green minibuses, since drivers may choose the optimum route to travel.

The greatest problem are with fares. As the minibuses do not have fixed fares, routes and timetables, the fluctuations in fares can be quite large. Some routes may reduce their fares to an unreasonable price in order to win more passengers, but when demand increases (e.g. during typhoons, when regulated buses and minibuses services are suspended), they can make increases in fares without limitation. For example, the route from Aberdeen to Wah Fu Estate could increase from $3 to $30 (probably equivalent to the fare travelled on a taxi), and the route from Jordan Road to Yuen Long could increase to $80, such acts have resulted in complaints from passengers.

Another issue is speeding. From late at night to the early morning, in order to make more rounds during their shifts to earn more, drivers may risk speeding. A typically long journey can be dramatically reduced. The government is trying to counter this by installing large, passenger-visible speedometers inside some minivans. This may be effective in some areas, however on the most part, most passengers do not seem to care if not even prefer the light buses to speed.

In the film Lost In Time, Cecilia Cheung playing the role as a red minibus driver, won the "Best Actress" Awards in the 2004 Hong Kong Film Awards.