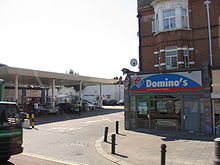 The exterior of a Domino's Pizza store in North London, England. 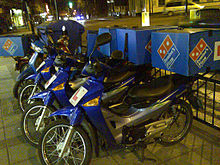 Domino's delivery motorcycles outside a store in East Finchley, London.

Domino's Pizza UK & IRL plc (LSE: DOM) is a United Kingdom-based franchisee of international fast food pizza delivery chain Domino's Pizza. Through its subsidiary Domino's Pizza Group, the company holds the exclusive right to own, operate and in turn franchise branches of the chain in the United Kingdom and Ireland. The firm's shares are listed on the London Stock Exchange and are a constituent of the FTSE 250 Index as of June 2008.

The Domino's Pizza company was founded in 1960 by American entrepreneur Tom Monaghan as a single pizzeria in Ypsilanti, Michigan. Through franchising, the firm had opened 200 American locations by 1978. The first British branch opened in Luton in 1985, with expansion into Ireland following six years later.[3] The master franchise for the British Isles was sold off by the parent company in 1993 to Domino's Pizza Group, a subsidiary of the International Franchise Systems holding company controlled by sibling investors Colin and Gerry Halpern.[4] The company partially floated its shares on London's Alternative Investment Market in 1999, by which time it had expanded to a network of almost 200 branches (of which all but eight were franchises).[5] Certain investors such as Colin Halpern and property entrepreneur Nigel Wray[5] retained significant stakes at this time. The company opened its 400th store in Wadsley Bridge, Sheffield in November 2005,[6] with the 500th following in late 2007.[7] The Domino's share transferred from AIM to the main market of the London Stock Exchange in May 2008,[8] and was promptly added to the FTSE 250 Index at the next quarterly review the following month.[9]

At the end of 2008 there were 553 branches of Domino's Pizza in the UK and Ireland, of which only one was wholly owned by the parent company.[10] The greatest concentration of stores is found in the south of the UK, with over 175 outlets in Greater London and South East England.[1] The chain has branches located in all nine regions of England, as well as Wales, Scotland, Northern Ireland and the Republic.[1] An ultimate total of around 1,000 branches across the region is targeted by the company.[6] Prospective franchisees are required to pay approximately £250,000 to the parent company for the right to operate their own Domino's Pizza outlet.[11][3] Once established, the group also provides other services for the franchisee including production of dough, sourcing and delivery of ingredients and training.[11] The group also delivers IT, advertising and other administrative services on behalf of the franchisees.[11]

In 2007 the current affairs programme Newsnight reported on the alleged poor treatment of Domino's Pizza employees.[17] Workers at one franchise claimed to be victims of "modern day slavery", according to union T&G Unite, with money unlawfully deducted from the workers' pay sometimes leaving workers being paid nothing or even made to pay the company. Some of the deductions made by the company included the costs of insuring the cars used to deliver pizzas, and one worker was deducted all her wages for the first week of work because the franchise designated it "unpaid training".[18] Then-CEO of the company Stephen Hemsley denied, however, that such issues were systemic within the franchise network.[17]

Domino's Pizza was the sponsor of episodes of The Simpsons on Sky1 between 1998[19] and 2008. In 2007, Ofcom introduced a ban on fast food advertising around programmes aimed at under sixteens,[20] so the advertising was dropped for a brief period but later resumed. The advertising subsequently became more brand focused, rather than promoting specific products.[21] In October 2008, the company announced that its sponsorship of the show would come to an end.[22] The firm has also sponsored episodes of The Simpsons on Channel 4 (which were previously sponsored by Pizza Hut). In 2006, Domino's launched products based on the show such as the "Homer's Hot Stuff" pizza, along with TV advertising featuring the characters. Domino's has also sponsored the first four series of Britain's Got Talent.[23] Orders received on the night of the 2008 final were around a third above those of a typical Saturday night.[23]

In 2007 Domino's became the first pizza company in the UK to launch a service that allows customers to order pizzas by text message.[24] In 2010, it launched a widget for social network sites, allowing any user with a blog, Facebook or MySpace account to promote Domino’s Pizza and receive a cash reward every time an order is placed through the widget.[25]