Nara-Narayana (Sanskrit: नर-नारायण; nara-nārāyaṇa) is a Hindu deity pair. Nara-Narayana is the twin-brother incarnation of the preserver-god Vishnu on earth, working for the preservation of dharma or righteousness. In the concept of Nara-Narayana, the human soul Nara is the eternal companion of the Divine Narayana.

The Hindu epic Mahabharata identifies god Krishna with Narayana and Arjuna - the chief hero of the epic - with Nara. The legend of Nara-Narayana is also told in the scripture Bhagavata Purana. Hindus believe that the pair dwells at Badrinath, where their most important temple stands.

The Nara-Narayana pair is frequently worshipped in temples of the Swaminarayan Faith. The followers of the sect believe that their founder Swaminarayan is an incarnation of Narayana. 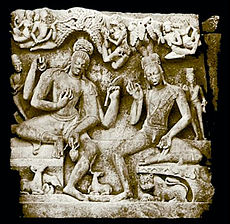 Narayana on the left and Nara on the right, Deogarh, Uttar Pradesh, ca. 5th century

The name "Nara-Narayana" can be broken into two Sanskrit terms, nara and Narayana. Nara means human, and Narayana refers to the deity of the name.

Monier-Williams dictionary says Nara is "the primeval Man or eternal Spirit pervading the universe (always associated with Narayana, "son of the primeval man"; both are considered either as gods or sages and accordingly called देवौ, ऋषी , तापसौ. In epic poetry, they are the sons of Dharma by Murti or Ahimsa and emanations of Vishnu, Arjuna being identified with Nara, and Krishna with Narayana.- Mahabharata, Harivamsa and Purana".[1] Narayana is Vishnu while Nara is Shesha

Nara-Narayana are depicted jointly or separately in images. When depicted separately, Nara is portrayed with two hands and wearing deer skin while Narayana is shown on the right in the usual form of Vishnu.

Sometimes, both of them are depicted identical to each other. They are depicted four-armed holding a mace, a discus, a conch and a lotus, resembling Vishnu. 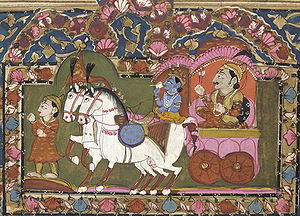 Krishna and Arjuna are often referred to as Nara-Narayana in the Mahabharata and are considered part incarnations of Narayana and Nara respectively, according to the Bhagavata Purana.[2]

In a previous life, the duo were born as the sages Nara and Narayana, and who performed great penances at the holy spot of Badrinath. Nara and Narayana were the Fifth Avatar of Lord Vishnu. The twins were sons of Dharma, the son of Brahma and his wife Murti (Daughter Of Daksha) or Ahimsa.[3]They live at Badrika performing severe austerities and meditation for the welfare of the world. These two inseparable sages took avatars on earth for the welfare of mankind and to punish the wicked ones. The sages defeated a demon called Sahasrakavacha ("one with a thousand armours").[4] Legend has it that once Lord Shiva tried to bring the fame of Nara and Narayana before the entire world. To do that, he hurled his own potent weapon Paashupathastra at the meditating rishis. The power of their meditation was so intense that the astra lost its power before them. Lord Shiva stated that this happened since the duo were jnanis of the first order constantly in the state of Nirvikalpa Samadhi.

The Bhagavata Purana tells the story of the birth of Urvashi from the sages Nara-Narayana.[5] Once, sages Nara-Narayana were meditating in the holy shrine of Badrinath situated in the Himalayas. Their penances and austerities alarmed the gods, so Indra, the King of Devas, sent Kamadeva, Vasanta (spring) and apsaras (nymphs) to inspire them with passion and disturb their devotions. The sage Narayana took a flower and placed it on his thigh. Immediately there sprung from it a beautiful nymph whose charms far excelled those of the celestial nymphs, and made them return to heaven filled with shame and vexation. Narayana sent this nymph to Indra with them, and from her having been produced from the thigh (uru in Sanskrit) of the sage, she was called Urvashi.[6][7] 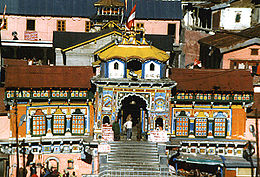 According to the Bhagavata purana, "There in Badrikashram (Badrinath) the Personality of Godhead (Vishnu), in his incarnation as the sages Nara and Narayana, had been undergoing great penance since time immemorial for the welfare of all living entities." (3.4.22) 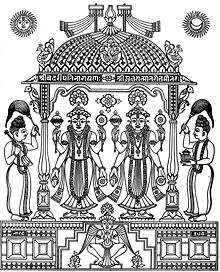 Narayana (left) with Nara, both of them are depicted identical to each other, holding a mace, a discus, a conch and a lotus.

According to Bhandarkar, the gods Nara-Narayana must be very famous at the time of the composition of the Mahabharata, since in the opening stanzas of different books obeisance is made to these two gods. In Vanaparvan (12. 46, 47), Krishna says to Arjuna,"O invincible one, you are Nara and I am Hari Narayana, and we, the sages Nara-Narayana, have come to this world at proper time.." In the same Parva, chapter 30 (verse 1); Shiva says to Arjuna "In former birth you were Nara and with Narayana as your companion, performed austerities for thousands of years at Badari".[8]