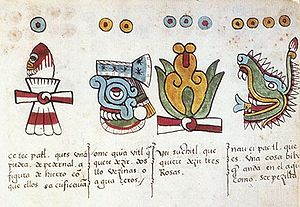 The tonalpohualli, a Nahuatl word meaning "count of days", is a 260-day sacred period (often termed a "year") in use in pre-Columbian Mesoamerica, especially among the Aztecs. This calendrical period is neither solar nor lunar, but rather consists of 20 trecena, or 13-day periods. Each trecena is dedicated to and under the auspices of a different deity.

In part due to the sheer antiquity of the tonalpohualli, its origin is unknown. Several theories have been advanced for this unique calendrical period: that it represents a Venusian cycle, that it represents the human gestation period, or that it represents the number of days when the sun is not overhead between August 12 and April 30 in the tropical lowlands. On the other hand, some scholars including J. E. S. Thompson suggest that the tonalpohualli was not based on natural phenomenon at all, but rather on the integers 13 and 20, both considered important numbers in Mesoamerica.

The other major Aztec calendar, the xiuhpohualli, is a solar calendar, based on 18 months of 20 days. A xiuhpohualli was designated by the name of its first tonalpohualli day. For example, Hernan Cortes met Moctezuma II on the day 8 Wind in the year 1 Reed (or November 8, 1519 in the Julian calendar).

The xiuhpohualli and the tonalpohualli would coincide every 52 years. The "year" 1 Reed was the 1st in that 52 year cycle.

In the Aztec calendar, there are twenty day signs.

Note that the symbols are arranged counterclockwise around the calendar round.