Dun Ringill (Gaelic: Dùn, 'fort', Ringill, 'point of the ravine') is an Iron Age hill fort on the Isle of Skye, Scotland. Further fortified in the Middle Ages, tradition holds that it was for several centuries the seat of Clan MacKinnon.[1] It is located on the peninsula of Strathaird east of Kirkibost on the west shore of Loch Slapin.

The original structure of Dun Ringill is consistent with an Iron Age Broch dating to approximately the first years of the common era. The main and subordinate structures have been occupied and modified throughout its history until the 19th century. Tradition relates that the structure was occupied by the MacKinnons as their clan seat well before the 16th century. It is mentioned in historical texts in the 16th century after which the MacKinnon's moved their seat to Dunakin.[2] 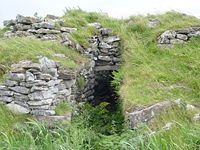 Dun Ringill today is a stacked stone ruin overlooking Loch Slapin. The present structure is approximately 4 meters in height and 16 meters on each side with a ditch following the outer wall. Its most notable feature is the central landward facing doorway approximately 1.8 meters high that leads into the center of the structure. The interior of the structure contained two rectangular buildings 4.5 meters by 2.4 meters.[2] The original layout was similar to that of a broch, a form of complex Atlantic roundhouse.[3] 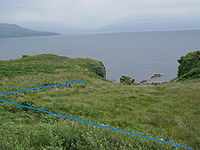 A stone wall foundation encloses area adjacent to the structure. Similarly to other castles and fortified houses, the wall probably formed a defensive perimeter and livestock enclosure. The remains of the wall itself are hidden by vegetation. A site survey has shown that there are remains of other buildings in the immediate vicinity; and although their age is uncertain, it is likely their construction and occupation was throughout the history of Dun Ringill up until the 19th century.[2]

To the north and west is a hilly coastal plain. Loch Slapin lies to the east and south of the structure. On either side of the structure are earth and stone ramps that descend down to the ocean. These ramps likely allowed easy access to the water and shipping. Since roads in this part of Skye did not exist until recent times, sea travel was the predominant mode of transportation.

The musical group Jethro Tull performed a song entitled Dun Ringill on their 1979 Stormwatch album. The lyrics call for a meeting down by Dun Ringill during the early hours of a stormy night, when "we'll watch the old gods play". The song was written by Tull leader Ian Anderson, who lived at Kilmarie House, within walking distance of Dun Ringill, at the time.[4]