The Umayyad conquest of Hispania is the Islamic Ummayad Caliphate's conquest, between 711 and 718, of the Christian Visigothic Kingdom of Hispania, centered in the Iberian Peninsula.

The conquest began with an invasion by an army that (according to traditional accounts) consisted largely of Berber Northwest Africans and was commanded by Tariq ibn Ziyad. They disembarked in early 711 at Gibraltar and campaigned their way northward. After a decisive battle, the Visigothic kingdom collapsed and over the following decade most of the Iberian Peninsula was brought under Muslim occupation, save for mountainous areas in the north-west (Galicia, Asturias) and northern mountainous areas of little interest for the newcomers. The conquered territory, under the Arabic name al-Andalus, became part of the expanding Umayyad empire.

The invaders subsequently moved north-east across the Pyrenees only to engage in battle with Odo the Great´s Aquitanians in Toulouse, where the Muslim advance ground temporarily to a halt. However, they resumed their advance north by the west, defeating independent duke Odo in Bordeaux. Charles Martel was at the time the Frankish mayor of the palace and Odo saw no choice but to seek his help, pledge allegiance to him and join the Frankish military forces, who defeated the Muslims at the Battle of Tours (Poitiers) in 732. Muslim control of territory in what became France was intermittent and ended in 759.

Though Muslim armies dominated the Iberian Peninsula for centuries afterward, Pelayo of Asturias's victory at the Battle of Covadonga in 722 preserved at least one Christian principality in the north. This battle later assumed major symbolic importance for Iberian Christians as the beginning of the Reconquista.

Because of the Muslim perception of Christians and Jews as People of the Book, numerous Jewish and Christian communities survived through the centuries of Muslim rule in al-Andalus.[1] 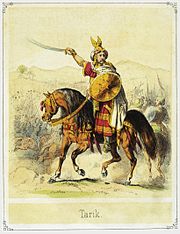 Precisely what happened in Iberia in the early 8th century is subject to much uncertainty. There is one contemporary Christian source, the Chronicle of 754 (which ends on that date), regarded as reliable but often vague. There are no contemporary Muslim accounts. What Muslim information there is comes from later compilations, which are much coloured by the writers' sense of what was proper, and by contemporary politics — the most prominent such compilation is that of Al-Maqqari, which dates from the 17th century. This paucity of sources means that any specific or detailed claims need to be regarded with caution.

What are available are a number of stories that might more properly be described as legends. The manner of King Roderic's ascent to the throne is unclear; there are accounts of dispute with the son of his predecessor Wittiza, and accounts that Wittiza's family fled to Tangier and solicited help from there. Numismatic evidence suggests some division of royal authority, with several coinages being struck. There is also a story of one Julian, count of Ceuta, whose wife or daughter was raped by Roderic and who also sought help from Tangier. However, these stories are legendary and not included in the earliest accounts of the conquest.[2]

As to the initial nature of the expedition, historical opinion takes four directions: (1) that a force was sent to aid one side in a civil war in the hope of plunder and a future alliance; (2) that it was a reconnaissance force sent to test the military strength of the Visigothic kingdom; (3) that it was the first wave of a full–scale invasion; (4) that it was an unusually large raiding expedition with no direct strategic intentions.

The Caliphate of Cordoba c. 1000 at the apogee of Al-Mansur.

According to traditional Islamic accounts, in the early 8th century an army estimated at some 10,000–15,000 combatants[3] led by one Tariq Ibn Ziyad crossed from North Africa. Ibn Abd-el-Hakem reports, one and a half centuries later, that "the people of Andalus did not observe them, thinking that the vessels crossing and recrossing were similar to the trading vessels which for their benefit plied backwards and forwards." They defeated the Visigothic army, led by King Roderic, in a decisive battle at Guadalete in 712. Tariq's forces were thence reinforced by those of his superior, the Emir Musa ibn Nusair, and went on to take control of most of Iberia.

During the period of the second (or first, depending on the sources) Arab governor Abd al-Aziz ibn Musa (714-716) the principal urban centres of Catalonia surrendered, at which time Muslim troops reached Pamplona. This submitted too, after a compromise was brokered with Arab commanders to respect the town and its inhabitants, a practice that seems to have been common in many towns of the Iberian Peninsula.[4] The Muslim troops found little resistance and, given the situation of the communications, 3 years seems to have been a reasonable lapse of time to cover the distance to almost the Pyrenees after making the necessary arrangements for the towns' submission and their future governance.[5]

The Chronicle of 754 states that 'the entire army of the Goths, which had come with him fraudulently and in rivalry out of hopes of the Kingship, fled'. This is the only contemporary account of the battle, and the paucity of detail led many later historians to invent their own. The location of the battle is not totally clear, but was probably the Guadalete River.

Roderic is believed to have been killed, and a crushing defeat would have left the Visigoths largely leaderless and disorganized. In this regard, the ruling Visigoth population is estimated at a mere 1 to 2% of the total population,[6] something which facilitated the apparently nearly instant demise of the Visigothic kingdom. The resulting power vacuum, which may have indeed caught Tariq completely by surprise, would have aided the Muslim conquest immensely.

The conquering army was made up mainly of Berbers, who had themselves only recently come under Muslim influence and were probably only lightly islamized.[dubious – discuss] It is probable that this army represented a continuation of a historic pattern of large-scale raids into Iberia dating to the pre–Islamic period, and hence it has been suggested that actual conquest was not originally planned. Both the Chronicle and later Muslim sources speak of raiding activity in previous years, and Tariq's army may have been present for some time before the decisive battle. It has been argued that this possibility is supported by the fact that the army was led by a Berber and that Musa, who was the Ummayad Governor of North Africa, only arrived the following year — the governor had not stooped to lead a mere raid, but hurried across once the unexpected triumph became clear. The Chronicle of 754 states that many townspeople fled to the hills rather than defend their cities, which might support the view that this was expected to be a temporary raid rather than a permanent change of government.

The conquest led to a period of several hundred years in which the Iberian peninsula was the province of Al-Andalus, dominated by Muslim rulers, and with only a handful of small Christian states surviving in the mountainous north. In 756 Abd ar-Rahman I, a survivor of the then-recently overthrown Umayyad Dynasty, seized power in Al-Andalus, founding an independent dynasty that survived until the 11th century. Muslim domination lasted longer: until the defeat of the Almohads in the 13th century, after which the Christian Reconquista became irresistible.

As discussed above, much of the traditional narrative of the Conquest is more legend than reliable history. Some of the key events and the stories around them are outlined below.