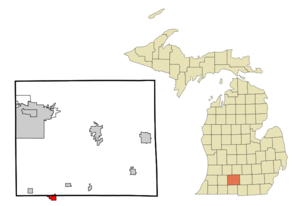 Union City is a village located mostly within Branch County in the of . It is part of the Battle Creek, . The population was 1,804 at the 2000 census.

The village is located mostly within Union Township, where the Coldwater River flows into the St. Joseph River. M-60 passes just north of the village. A small portion of the village lies within Burlington Township in Calhoun County. The city is home to a clothing optional park, Turtle Lake Resort.

The "Meteor Ridge Farm", formerly called "The Plantation" was built in 1859 or 1860 and served as a stop on the , even receiving a personal visit from President LincolnUnion City is located on the northern border of Branch County, about ten miles northwest of Coldwater. This is a small picturesque and historic town that functions primarily as an adjunct community to the greater Coldwater and Battle Creek areas. It has a striking turn-of-the-century look architecturally, with well preserved downtown buildings and several Victorian style homes. A Civil War monument can be seen on the north end of the main street area in the churchyard, while a veteran’s memorial along the riverbank to the south end stands to commemorate those who fought in more recent wars.

Union City was first settled by Justice Goodwin in 1833, when he built a mill here and became the first postmaster, calling it "Goodwinville." A year later, he sold several hundred acres to E. W. Morgan, who officially platted the site, renaming it from the "union" of the Coldwater and St. Joseph Rivers, which join there. It was eventually incorporated as a city in 1866. Courtesy of infomi.com. [ [http://www.patriciapolacco.com/author/my_home/my_home.html The Story Behind the Home] ]

According to the , the village has a total area of 1.5 s (3.8 ), of which, 1.5 square miles (3.8 km²) of it is land and 0.68% is water.Longtime Dearborn Mi Mayor Orville Hubbard called Union City his hometown.Former Olympic Javelin record holder Lee Bartlett called Union City Home

There were 685 households out of which 36.6% had children under the age of 18 living with them, 51.5% were married couples living together, 13.0% had a female householder with no husband present, and 30.7% were non-families. 25.7% of all households were made up of individuals and 11.2% had someone living alone who was 65 years of age or older. The average household size was 2.62 and the average family size was 3.15.