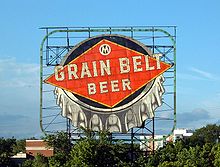 Grain Belt is a brand of beer brewed in the American state of Minnesota, by the August Schell Brewing Company. The beer has been produced in Three varieties: Grain Belt Golden, the original style introduced in 1893, and Grain Belt Premium, first introduced in 1947, and the brand new Grain Belt Nordeast, introduced to Northeast Minneapolis April 7th 2010 and state wide April 8th. It was originally produced by the Minneapolis Brewing Company which formed with the merger of four smaller brewers in 1891. Soon after introduction, Grain Belt became the company's flagship product. It was brewed at the original Grain Belt brewery in Minneapolis, Minnesota until 1976. A series of other owners followed, and Schell took over the product line in 2002.

The name refers to the "Grain Belt" of the American Midwest where much of the world's supply of barley, corn, soybeans and other grains are produced. The diamond-shaped logo was introduced early on, though it wasn't until the late 1930s that a rendering of a bottlecap was added as background. After prohibition a large billboard was erected on Nicollet Island next to the Hennepin Avenue Bridge around 1940. For years, it flashed the letters in sequence ("G-R-A-I-N B-E-L-T BEER"). This sign still stands today as a local landmark. Grain Belt introduced cap sealed conetop steel cans in the 1930s. At the same time, the company offered its beers in longneck bottles and on draft.

Grain Belt Golden, a traditional golden German-style lager, was popular, but Prohibition forced the company to stop production from 1920 until 1933. The company temporarily changed its name to Golden Grain Juice Company and, like many other brewers, turned to making near beer and soft drinks until repeal of the Eighteenth Amendment to the US Constitution. Grain Belt Beer returned to taverns in October 1933 with bottled beer reappearing in December.

World War II brought rationing, and the company briefly had to drop cans altogether and resort to using green glass in its bottles rather than the standard amber color, which offered better protection from light. Sale of beer in bottles and cans had become dominant over draft sales in drinking establishments, so the brewer experimented with all sorts of packaging innovations, expanding the line after the war ended. A premium beer, called Grain Belt Premium, entered production in 1947. Conetop cans sealed with caps disappeared in the 1950s in favor of flat-top steel cans.

The company officially changed its name to Grain Belt Breweries in 1967 after purchasing the Storz Brewing Company of Omaha, Nebraska, United States, which marketed Storz Beer and Storz Tap Beer in bottles, cans and draft. Grain Belt also took over the line of the New Ulm, Minnesota-based Hauenstein Brewery two years later. About that time, Grain Belt introduced a new beer called GBX Malt Liquor. For many years, the company also brewed Grain Belt Bock Beer for limited release in the spring. Grain Belt billboard signs could be seen on the scoreboard at Minnesota Vikings games and the beer was a popular choice in the stands at Minnesota Twins games too. The label featured the image of a bubbling water fountain, which had been built on the park-like grounds of the brewery to tout the pure water used in the brewing process. At the end of the 1960s, Grain Belt was the 18th-largest brewing company in the United States, and a major force in the Midwest. Primary competitors up to this point had been local rivals, Theodore Hamm and Jacob Schmidt, both in St. Paul, Gluek Brewing Company, also in Minneapolis, Cold Spring Brewing Company in Cold Spring, Minnesota and a few other regional brewers. Business began to decline quickly though as better capitalized national brewing companies such as Anheuser-Busch, Schlitz and Miller began targeting the markets of regional brewers like Grain Belt. These companies swooped into markets, often advertising heavily, dropping prices and forcing regional brands like Grain Belt into the background since the smaller regional brewers were unable to match the big brewer's advertising and promotional budgets. Stockholders decided to sell the Grain Belt company to area businessman Irwin Jacobs in 1975, but operation ceased by the end of the year.

In 1976 the leftovers were sold to G. Heileman Brewing Company (based in LaCrosse, Wisconsin), which closed the original Minneapolis brewery and moved production to the former Jacob Schmidt brewery in St. Paul, Minnesota, which Heileman had purchased only a few years before. At the St. Paul facility, former rivals Grain Belt and Schmidt were brewed side by side with Heileman stablemates Old Style and Special Export for many years. Heileman also launched a low calorie version of Grain Belt called Grain Belt Light.

In 1989, G. Heileman, citing over-capacity, closed the St. Paul brewery and moved production of Grain Belt to its La Crosse, Wisconsin brewery, taking production of the Grain Belt (and Schmidt) brands out of the Twin Cities for the first time. G. Heileman found itself faltering within a decade because of many of the same market pressures Grain Belt Breweries had faced in the 1970s. A group of investors was formed to purchase the Schmidt plant from Heileman. They also negotiated to buy the Grain Belt product line so they would have a recognizable, established Twin Cities brand to market. The new company was called the Minnesota Brewing Company 1991. It thrived during the 1990s with sales peaking in 1996. Minnesota Brewing also did lots of contract brewing for other beverage companies in order to improve efficiencies and keep the plant operating closer to capacity.

In 2001, the company launched a line of specialty craft beers under the "Brewer's Cave" and "Grain Belt Archive Series" brand names. These beers were high quality, all malt products brewed without adjunct grains such as corn or rice. In addition, most were highly hopped and very flavorful in order to appeal to the new breed of craft beer drinkers. Unfortunately, in a classic case of "too little, too late", these fine Grain Belt beers came a bit late to save the company, which was facing financial problems.

History repeated itself yet again, and by 2001 sales were off 50% from their 1996 highs. The company was going deeper into debt, and Minnesota Brewing filed for bankruptcy in February 2002. On June 24, 2002 the brewery's doors were closed for good. The Grain Belt brand was bought in August 2002 by a longtime rival Minnesota brewer, the August Schell Brewery of New Ulm. Schell brews and packages Grain Belt Premium and Grain Belt Nordeast primarily for the local Minnesota market. Grain Belt Premium has since become Schell's most popular brand, and has earned an especially strong following in the younger demographic of the region.

The former brewery building in Northeast, Minneapolis, located north of Broadway Street Northeast on the east bank of the Mississippi River, is listed in the National Register of Historic Places. The building was renovated and redeveloped by Ryan Companies and is now home to multiple tenants. The contributing structures include the brewhouse, now home to RSP Architects; the power station (also known as the Boiler House); the Wagon Shed and Shops (also known as the Gasthaus), now home to the Pierre Bottineau Branch of Hennepin County Library; the Grain Belt Office; the Bottlehouse, including the 1969 addition, which is now home to many artists studios; the 1910 Warehouse, including its 1949 and 1957 additions, but not its 1964 addition, which has been developed into office and light industrial space; and a railroad spur. The Keg House is also part of the complex, but not part of the Registered Historic Place entry. The renovation has won the National Preservation Award from the American Institute of Architects.[1] The area forms an anchor to the Northeast Minneapolis Arts District, including many members of the Northeast Minneapolis Arts Association. The 1964 addition to the warehouse will be demolished as part of the development of Sheridan Memorial Park.