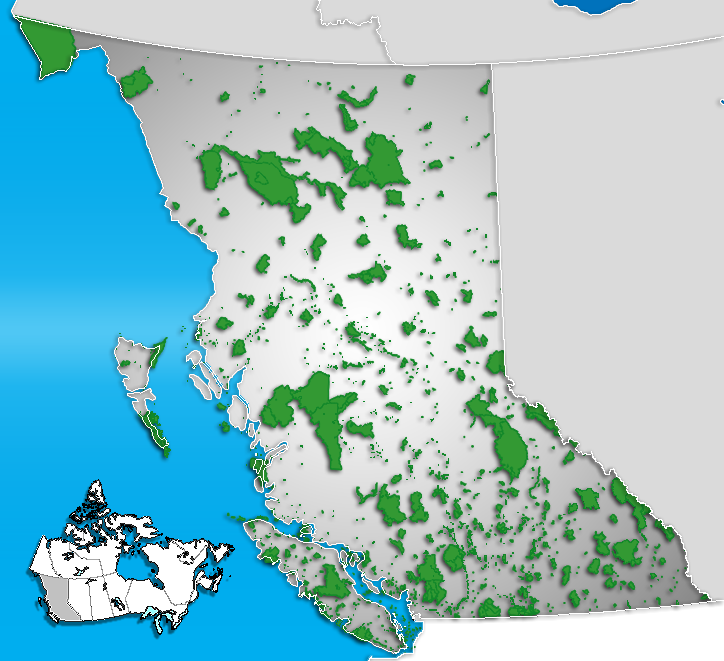 Tatshenshini-Alsek Park or Tatshenshini-Alsek Provincial Wilderness Park in (9,580 km²) was established in 1993 after an intensive campaign by Canadian and American conservation organizations to halt mining exploration and development in the area and protect the area for its strong natural heritage and biodiversity values. The park is situated in the very northwest corner of British Columbia having borders with both the American State of and the Canadian . It nestles between in the Yukon and Glacier Bay & Wrangell-St. Elias s and Preserves in Alaska. It is part of the Kluane/Wrangell-St. Elias/Glacier Bay/Tatshenshini-Alsek Park .

Sites of numerous and fishing villages were located along the rivers. The eastern edge of the park follows an ancient trade route used by the Chilkat tribe to barter with the Tutchone.

In the mid-1800s, a tragic flood occurred with the sudden expulsion of a huge lake dammed up for years by a glacier that had advanced until it completely blocked the . A wall of water 7 metres high and 15 metres wide swept an entire Tutchone village into the sea at Dry Bay.

Tatshenshini-Alsek was one of the last areas of British Columbia to be mapped and explored. In the 1960s the first geological exploration for minerals took place in the area. Significant copper deposits were found in the vicinity of Windy Craggy Mountain, in the middle of the Tatshenshini region. In the mid-1970s two companies began rafting the Tatshenshini (Tat) and Alsek rivers for the first time. In the mid-1980s a proposal surfaced to develop Windy Craggy peak into a huge open-pit mine.

In 1991 Tatshenshini International was established, linking together the top 50 conservation organisations in North America. An extremely intensive campaign followed in Canada and in the United States, particularly the , and eventually the , when the active involvement of then Vice-President was enlisted. Eventually, then BC Premier responded by undertaking a review of the issues surrounding Tatshenshini-Alsek by the Commission on Resources and the Environment (CORE). BC government under Premier Harcourt decided in June 1993 to protect Tatshenshini-Alsek as a Class A park. The owners of the Windy-Craggy mineral claims were given a $103.8 million settlement.

In combination with the adjoining national parks this completed the world's largest international park complex. The International Union for the Conservation of Nature () then proposed the area for protection as a World Heritage Site.

The transfrontalier park system comprising Kluane, Wrangell-St Elias, Glacier Bay and Tatshenshini-Alsek parks, was declared a in 1994 for the spectacular glacier and icefield landscapes as well as for the importance of grizzly bears, caribou and Dall sheep habitat.

In 1999, a party of sheep hunters found artifacts and remains of a human at the foot of a glacier. The well-preserved frozen body turned out to be about 550 years old.

The Alsek and Tatshenshini rivers flow through the park in glacier-carved U-shaped valleys. These valleys through the coastal mountains allow cool, moist ocean air into the cold interior. The quick change from ocean to interior environment, frequent floods, landslides and avalanches, a varied geology and great elevation changes have together created an exceptionally diverse range of habitat conditions.

Tatshenshini-Alsek Park supports a large grizzly bear population. A green area that cuts through a barrier of mountain and ice connects coastal and interior grizzly bear populations and provides a perfect habitat. The park is the only Canadian home of the glacier bear. This extremely rare blue-grey colour phase of the black bear is found only within the park and just over the border in to the United States.

Along the coastline, s and s can be seen.

Alsek Ranges are situated there and , at 4,663 metres is the province’s highest peak. The Tatshenshini-Alsek area lies in a region of high earthquake activity. Slippages along the Fairweather and Hubbard/Boarder Faults to the west and the to the north cause regular quakes.