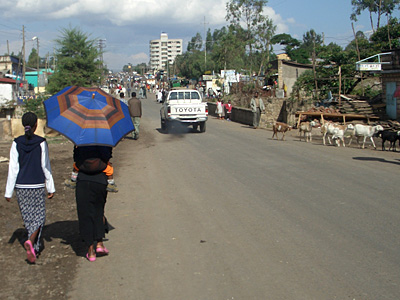 Ambo is known for its , which is bottled outside of town; it is reportedly the most popular brand in Ethiopia. [Philip Briggs, "Ethiopia: The Bradt Travel Guide", 3rd edition (Chalfont St Peters: Bradt, 2002), p. 483.] Nearby attractions include to the south with its , and the Guder and .

After Lij Iyasu was captured, he was held for a while at Ambo, before being transferred to house arrest at . By 1933, Ambo had started to be a recreation place with the construction of some bath cabins with cisterns of concrete, and a couple of European-type hotels, as well as simple villas for the Emperor and important persons.

By 1938, the "Guida" described improvements to Ambo which included a post office, telephone service, a clinic for outpatients, restaurants, and a hotel under construction. Two Italian forts were constructed, and in a cave the Italians had erected a monument for casualties of the Pusteria Division. The approach to Ambo was still over an old bridge, and below it a natural bridge used by caravans.

When the Allies reached Ambo with a South African armoured car patrol in early 1941, they had to evacuate 140 "utterly panicked Italians". The British had an improvised camp for at Ambo until 1942.

At least as early as 1955, there was a 170 kW hydro-electric power station in the town; by 1965 the installed electrical capacity was 210 kVA, with annual production of 132,000 kWh. In 1958 Ambo was one of 27 places in Ethiopia ranked as First Class Township. That same year, the Ambo Agricultural School and Ambo Forestry School had 150 students. A light earth tremor was felt in the evening of . Its was somewhere near Ambo but no damage occurred.

In the last weeks of the , the EPRDF broadcasteded on that they had captured Ambo from the . This was part of their strategy to avoid a direct assault on the capital, , and instead surround the city and isolate it from the rest of the country. [Paul B. Henze, "Layers of Time: A History of Ethiopia" (New York: Palgrave, 2000), p. 328]

Upon learning in 1994 that a local group of Amhara had formed a group called Galla-geday (" killers"), the local people voiced their objection to this group, and demanded its dissolution. When their pleas fell on deaf ears, the people had to take the necessary action in self-defense. Then a prominent Oromo businessman, Daraaraa Kafani, was murdered in front of his home; eye witnesses said he was slain by a man wearing a military uniform. His funeral was attended by thousands of Oromos in Ambo; police arrested more than 37 people, stating that they were supporters of the (OLF) on . In the following February, 70-year old Oromo elder Dandana Gurmu was arrested on suspicions of supporting the OLF.

On , , the government signed an agreement with in to establish a sister city program with . [ [http://oromiagov.org/newsdetail.asp?NewsID=286 "Oromia State Regional Government and the delegation of Henan Province sign an agreement on the Establishment of Friendship City Relationship"] (Oromia State government website)]