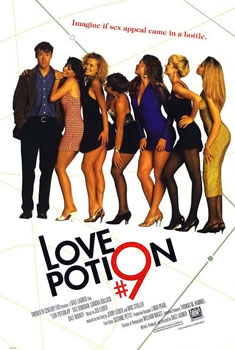 "Love Potion No. 9" is a 1992 movie starring and . Inspired by the famous song of the same title, it's about a special (Love Potion No. "8") that enables a person to make people of the opposite sex become completely infatuated with them by simply talking. The also makes people of the same sex loathe, and sometimes physically attack, the one who is using the potion.

The film gives a pseudoscientific explanation as to how the potion "works", it's explained:

:"When swallowed it affects the directly so that when you speak microtremors encoded within your voice stimulate tiny little hairs in the of the opposite sex. The hair vibrates, sending a signal along a nerve to the , which in turn produces a combination of mood-altering, endogenous chemicals responsible for the biochemical process of falling in love. It makes members of the same sex hostile. It only works for four hours at a time."

Paul Matthews (Tate Denovan) is a lonely biochemist with a crush on his unavailable co-worker, Diane Farrow (Sandra Bullock). His friends take him to a gypsy on 34th and Vine named Madame Ruth. After reading his palm and seeing absolutely no romance in his life, Ruth gives him a small bottle of very diluted Love Potion No. 8. As a scientist, Paul has doubts, and ends up throwing it in the trash when he gets home. Around this time, Paul's friends buy him the services of Marisa.

His cat gets into the trash and eats some of the potion; then it meows and attracts all the other cats in the neighborhood. When Paul sees the results, he takes it to Diane, and they find out the "scientific" properties of it. After analyzing it, they decide to use themselves as human test subjects. Diane ends up attracting an Italian car mogul and the prince of England, ending up getting a makeover in the process, while Paul has a string of hookups with women in bars, supermarkets, cars, and sorority houses.

Paul and Diane realize their romantic attraction to each other and become involved. Eventually, Paul plans a proposal to Diane; however, when he comes by her house to do so, she has fallen into the arms of Gary, whom she was dating briefly earlier in the movie. Paul gathers his friends and tells them about the potion, which causes them to laugh in his face. He then calls Marisa and gives her some potion; she then proves to Paul's friends what the potion can do.

By this time, Diane and Gary are getting married. Paul goes back to Madame Ruth, who gives him Love Potion No. 9, which will purify Diane and Paul's love forever (unless Diane was never entirely in love with him, in which case Paul will love Diane for his entire life and Diane will eternally hate him). Paul and friends coerce the matron at Diane's wedding to help them, and Diane ends up running out of the wedding into Paul's arms. They live happily ever after.