Delray is a neighborhood and former incorporated village, located on the south side of Detroit, Michigan. It is isolated from other areas of Detroit by industrial warehouses and Interstate 75. As a neighborhood, Delray has no legally defined boundaries, but its area usually extends south to the River Rouge, east to the Detroit River, west to Fort Street and Interstate 75, and north to Dragoon Street at Fort Wayne or sometimes further north to Clark Street.[2]

In 1930, Delray had approximately 23,000 residents. As of the 2010 Census, the two tracts that cover the area had a population of 2,783, a 33% decrease in population from the 2000 Census. Residents have relocated over the years due to the increased industrialization of the neighborhood. Much of Delray consists of riverfront industries, interspersed with residential properties, mostly single-family and duplex houses. Due to this high level of disrepair, in 2007, the Detroit Metro Times described Delray as "the closest thing to a ghost town within a city."[3]

Delray is located at the southern edge of the city limit of Detroit, although it is not the city's southernmost territory. The neighborhoods of Boynton and Oakwood Heights occupy the southernmost strip of Detroit along Outer Drive and Fort Street extending down to the city of Lincoln Park.[4] With no official boundaries, Delray is considered mostly conterminous with two Census Bureau tracts that cover 2.938 square miles (7.609 km2). Major thoroughfares through Delray, which typically represent the neighborhood's boundaries, include Fort Street, Interstate 75 (Fisher Freeway), and West Jefferson Avenue. Delray is relatively isolated from the rest of the city.

The southern border of Delray is the River Rouge, with the city of River Rouge on the southern side of the river. The two are connected by the West Jefferson Avenue-Rouge River Bridge. Due to a bend at the mouth of the River Rouge, Delray is also bordered on the southeast by the river as well. Across the river at that point lies Zug Island, which is under the jurisdiction of the city of River Rouge. North of Zug Island, Delray borders the Detroit River on the east. No residents of Delray live along either body of water due to the congestion of riverfront industries and the historic Fort Wayne.

Historic Fort Wayne, built 1843 to guard Detroit from British attack from Windsor's Fort Malden, is located at the northeastern end of the neighborhood. 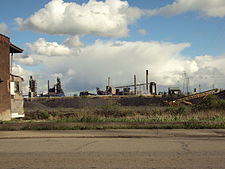 The area known as Delray was first platted as "Belgrade" in 1836. It was replatted as "Delray" in 1851. Augustus D. Burdeno, after returning from the Mexican-American War convinced other residents to rename the town after a Mexican village, probably associated with the Battle of Molino del Rey. Most of the village sat in what was Springwells Township, with the rest sitting across the River Rouge in Ecorse Township. It incorporated as a village in 1897.[citation needed] Around 1889 many Slovaks, Hungarians, and Poles settled in Delray. Dense housing arrangements appeared to accommodate the immigrants going to Delray. In 1894 Solvay Process Company opened a chemical plant. The company provided a fire service and paved streets to Delray. In 1901 Detroit Iron Works built two iron-making blast furnaces on Zug Island, near Delray. In 1905 Detroit annexed Delray. Chemical plants and factories opened in Delray. As years passed, residents who were able to move did so.[3] Delray had around 23,000 residents in 1930.[citation needed]

In the 2000s many of Delray's businesses closed during the late 2000s economic recession. In addition, around that time U.S. Steel had taken over Zug Island. Many workers had been laid off during the recession.[3]

In the 1990s the neighborhood dealt with large gang membership. Numerous gangs targeted in policing efforts to control crime and recruitment were the Cobras, Cash Flow Posse, Inner City Posse, Gangster Disciples, Latin Counts, Latin Kings, and the Delray Mafia.[6] According to the 2000 census, 3,100 lived in Delray.[5] John Carlisle (DetroitBloggerJohn) said in a 2009 article in the Detroit Metro Times that "a foul stench" was present in Delray due to the wastewater plant and the factories still operating.[3]

Residents of Delray are zoned to Detroit Public Schools (DPS). From 1894–1999, James McMillan School was located on Southwest End Street in central Delray. Originally opened as an elementary school, it was absorbed into DPS in 1907. It was converted into a high school but back into an elementary school for the district in 1916. McMillan Elementary School operated until the end of the 1999 school year, when DPS shut down the school. After it was closed, it remained unused with no intentions of being reopened. It subsequently became heavily vandalized and polluted until the building itself was torn down in 2009.[7]

In September 1907, Branch 8 of the Detroit Public Library system opened as the Delray Branch on West End Avenue. In January 1922, the branch was replaced with the James Valentine Campbell Branch on West Fort Street. The branch operated until its closure in December 1996. In July 1999, the Campbell Annex Branch opened at the Holy Redeemer Cultural Center and closed in August 2004, only to reopen as the Campbell Branch at Lawndale Station. The neighborhood currently contains no libraries but is closest served by the Campbell Branch Library. It is located outside of the neighborbood at 8733 West Vernor in the Springwells neighborhood.[11]