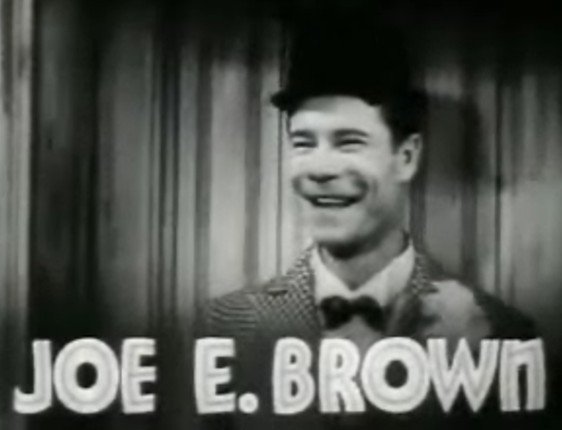 Joseph Evans Brown (, – , ) was an actor and comedian from . In 1902 at the age of 10, he joined a troupe of circus tumblers known as the Five Marvellous Astons which toured the country on both the circus and vaudeville circuits. He gradually added comedy into his act and transformed himself into a comedian. He moved to Broadway in the 1920s first appearing in the "Jim Jam Jems".

In late 1928, he began making films. In 1929, he started making films for Warner Brothers. He quickly shot to stardom after appearing in the first all-color all-talking musical comedy "" (1929). Warner Brothers quickly starred him in a number of lavish musical comedies including: "" (1929), "" (1930) and "" (1930). By 1931, Joe E. Brown had become such a star that his name began to appear alone above the title of the movies in which he appeared. In 1933 and 1936, he managed to become one of the top ten earners in films. In 1937, he left Warner Brothers to work for . In 1938, he starred in "The Gladiator", a loose film-adaptation of 's 1930 novel "Gladiator", which influenced the creation of . [Jones, Gerard. "Men of Tomorrow: Geeks, Gangsters, and the Birth of the Comic Book". New York: Basic Books, 2004 (ISBN 0465036562), pg. 80] He gradually switched to making "B" pictures. During World War II, he spent a great deal of time entertaining troops, spending many nights meeting personally with servicemen at the famous . In 1939, Brown testified before the House Immigration Committee in support of a bill that would allow 20,000 German refugee children into the United States. [ "The Holocaust Chronicle." Publications International Ltd., 2000 (ISBN 0-7853-2963-3), pg. 162] In 1941 Brown's son, Captain Don E. Brown, was killed when his military plane crashed near Palm Springs, .

He was the Mystery Guest on during the January 11, 1953 episode. During the episode, it was mentioned that he spent a lot of time overseas in Europe entertaining the troops.

His best known postwar role was in "" (1959) comedy directed by in which he played the aging millionaire, Osgood Fielding III. The character of Fielding falls for Daphne (Jerry), played by in drag, and gets to say one of the most famous punchlines in film history. Another of his notable postwar roles was that of "Cap'n Andy Hawkes" in 's 1951 of "", a role that he reprised onstage in the 1961 revival of the musical, and on tour. The musical film version included such promiment costars as , and . Brown performed several dance routines in the film, and famed choreographer appeared along with first wife Marge. Brown is also one of the few comedians to appear in a Shakespeare film; he played in 's film version of 's "A Midsummer Night's Dream", and contrary to what might be expected, was highly praised for his performance.

Brown was a sports enthusiast, both in film and personally. Some of his best films were the "baseball trilogy" which consisted of "Fireman Save My Child" (1932), "Elmer the Great" (1933) and "" (1935). He was also a television and radio broadcaster for the in 1953. His son, , inherited an interest in baseball, becoming the general manager of the for more than twenty years. Brown also spent Ty Cobb's last days with him before he died, discussing his life.

Brown's sports enthusiasm also led to him becoming the first president of (at the time named Pony League) when the organization was incorporated in 1953. He continued in the post until late 1964 when he retired. Likable and gregarious, Joe traveled many thousands of miles visiting G.I.s in far sections of the globe during World War II and later traveled additional thousands of miles telling the story of PONY League hoping to interest adults in organizing baseball programs for young people. He was also a fan of , a regular at and the races at Santa Anita.

Brown died of a in 1973 in . The comedian was three weeks shy of his 81st birthday. [cite news |first= |last= |authorlink= |coauthors= |title=Joe E. Brown, Comedian Of Movies and Stage, Dies; A Favorite of the Young Played Roles of Losers Big Mouth Only a Trick Servicemen Liked Him A Hit in 'Listen Lester' Took Shakespearean Role Harvey' Role Won Degree. |url= |quote=Joe E. Brown, the beloved elastic-mouth comedian, died at his home here today. He was 80 years old. Mr. Brown was incapacitated by a stroke several years ago, and he had also suffered from severe arthritis. |publisher= |date=, , Saturday |accessdate=2007-08-21 ]

He was caricatured in the cartoons , and . All of them contain a scene in which he is seen laughing so loud that his mouth opens extremely wide.