Analytic geometry, or analytical geometry has two different meanings in mathematics. The modern and advanced meaning refers to the geometry of analytic varieties. This article focuses on the classical and elementary meaning.

In classical mathematics, analytic geometry, also known as coordinate geometry, or Cartesian geometry, is the study of geometry using a coordinate system and the principles of algebra and analysis. This contrasts with the synthetic approach of Euclidean geometry, which treats certain geometric notions as primitive, and uses deductive reasoning based on axioms and theorems to derive truth. Analytic geometry is widely used in physics and engineering, and is the foundation of most modern fields of geometry, including algebraic, differential, discrete, and computational geometry.

Usually the Cartesian coordinate system is applied to manipulate equations for planes, straight lines, and squares, often in two and sometimes in three dimensions of measurement. Geometrically, one studies the Euclidean plane (2 dimensions) and Euclidean space (3 dimensions). As taught in school books, analytic geometry can be explained more simply: it is concerned with defining and representing geometrical shapes in a numerical way and extracting numerical information from shapes' numerical definitions and representations. The numerical output, however, might also be a vector or a shape. That the algebra of the real numbers can be employed to yield results about the linear continuum of geometry relies on the Cantor–Dedekind axiom.

The Greek mathematician Menaechmus solved problems and proved theorems by using a method that had a strong resemblance to the use of coordinates and it has sometimes been maintained that he had introduced analytic geometry.[1] Apollonius of Perga, in On Determinate Section, dealt with problems in a manner that may be called an analytic geometry of one dimension; with the question of finding points on a line that were in a ratio to the others.[2] Apollonius in the Conics further developed a method that is so similar to analytic geometry that his work is sometimes thought to have anticipated the work of Descartes — by some 1800 years. His application of reference lines, a diameter and a tangent is essentially no different than our modern use of a coordinate frame, where the distances measured along the diameter from the point of tangency are the abscissas, and the segments parallel to the tangent and intercepted between the axis and the curve are the ordinates. He further developed relations between the abscissas and the corresponding ordinates that are equivalent to rhetorical equations of curves. However, although Apollonius came close to developing analytic geometry, he did not manage to do so since he did not take into account negative magnitudes and in every case the coordinate system was superimposed upon a given curve a posteriori instead of a priori. That is, equations were determined by curves, but curves were not determined by equations. Coordinates, variables, and equations were subsidiary notions applied to a specific geometric situation.[3]

The eleventh century Persian mathematician Omar Khayyám saw a strong relationship between geometry and algebra, and was moving in the right direction when he helped to close the gap between numerical and geometric algebra[4] with his geometric solution of the general cubic equations,[5] but the decisive step came later with Descartes.[4]

Analytic geometry has traditionally been attributed to René Descartes[4][6][7] Descartes made significant progress with the methods in an essay entitled Geometry, one of the three accompanying essays published in 1637 together with his Discourse on the Method of Rightly Conducting the Reason in the Search for Truth in the Sciences, commonly referred to as Discourse on Method. This work, written in his native French tongue, and its philosophical principles, provided the foundation for Infinitesimal calculus in Europe. 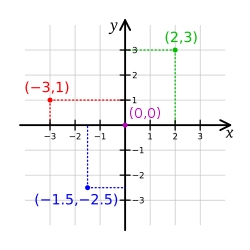 In analytic geometry, any equation involving the coordinates specifies a subset of the plane, namely the solution set for the equation. For example, the equation y = x corresponds to the set of all the points on the plane whose x-coordinate and y-coordinate are equal. These points form a line, and y = x is said to be the equation for this line. In general, linear equations involving x and y specify lines, quadratic equations specify conic sections, and more complicated equations describe more complicated figures. 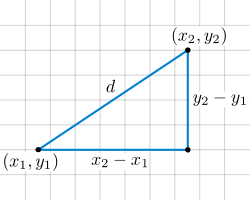 The distance formula on the plane follows from the Pythagorean theorem.

In analytic geometry, geometric notions such as distance and angle measure are defined using formulas. These definitions are designed to be consistent with the underlying Euclidean geometry. For example, using Cartesian coordinates on the plane, the distance between two points (x1, y1) and (x2, y2) is defined by the formula

which can be viewed as a version of the Pythagorean theorem. Similarly, the angle that a line makes with the horizontal can be defined by the formula

where m is the slope of the line.

Section of a Line

In Analytical Geometry a section of a line can be given by the formula where (c,d)&(e,f) are the endpoints of the line & m:n is the ratio of division

Transformations are applied to parent functions to turn it into a new function with similar characteristics. For example, the parent function y=1/x has a horizontal and a vertical asymptote, and occupies the first and third quadrant, and all of its transformed forms have one horizontal and vertical asymptote,and occupies either the 1st and 3rd or 2nd and 4th quadrant. In general, if y = f(x), then it can be transformed into y = af(b(x − k)) + h. In the new transformed function, a is the factor that vertically stretches the function if it is greater than 1 or vertically compresses the function if it is less than 1, and for negative a values, the function is reflected in the x-axis. The b value compresses the graph of the function horizontally if greater than 1 and stretches the function horizontally if less than 1, and like a, reflects the function in the y-axis when it is negative. The k and h values introduce translations, h, vertical, and k horizontal. Positive h and k values mean the function is translated to the positive end of its axis and negative meaning translation towards the negative end.

Important themes of analytical geometry are

Many of these problems involve linear algebra.

Here an example of a problem from the United States of America Mathematical Talent Search that can be solved via analytic geometry:

Using the midpoint formula, the points F, G, H, I, X, and Y are located at

Since XY has to be an integer,