Closeup of a maximum thermometer. The break in the column of mercury is visible.

A mercury-in-glass thermometer, also known as a mercury thermometer, was invented by German physicist Daniel Gabriel Fahrenheit in 1724 and is a thermometer consisting of mercury in a glass tube. Calibrated marks on the tube allow the temperature to be read by the length of the mercury within the tube, which varies according to the heat given to it. To increase the sensitivity, there is usually a bulb of mercury at the end of the thermometer which contains most of the mercury; expansion and contraction of this volume of mercury is then amplified in the much narrower bore of the tube. The space above the mercury may be filled with nitrogen or it may be less than atmospheric pressure, which is normally known as a vacuum. 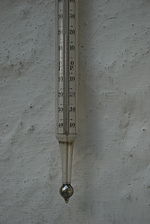 A large mercury in glass thermometer.

The thermometer was used by the originators of the Fahrenheit and Celsius scales.

Anders Celsius, a Swedish Astronomer, devised the Celsius scale, which was described in his publication the origin of the Celsius temperature scale in 1742.

Celsius used two fixed points in his scale: the temperature of melting ice and the temperature of boiling water. This wasn't a new idea, since Isaac Newton was already working on something similar. The distinction of Celsius was to use the melting temperature and not the freezing temperature. The experiments for reaching a good calibration of his thermometer lasted for 2 winters. By performing the same experiment over and over again, he discovered that ice always melted at the same calibration mark on the thermometer. He found a similar fixed point in the calibration of boiling water vapour (when this is done to high precision, a variation will be seen with atmospheric pressure). At the moment that he removed the thermometer from the vapour, the mercury level climbed slightly. This was related to the rapid cooling (and contraction) of the glass.

The air pressure influences the boiling point of water. Celsius claimed that the level of the mercury in boiling water is proportional to the height of the barometer.

Finally, Celsius proposed a method of calibrating a thermometer:

These points are adequate for approximate calibration but both vary with atmospheric pressure. Nowadays, the triple point of water is used instead (the triple point occurs at 273.16 kelvins (K), 0.01 °C).

A medical mercury-in-glass maximum thermometer showing the temperature of 38.7 ºC.

A Maximum minimum thermometer, also known as Six's thermometer, is a thermometer which can measure the maximum and minimum temperatures reached over a period of time, usually during a day. The traditional design contains mercury in the glass tube, but this is used solely as a way to indicate the position of a column of alcohol, and so it is not strictly a mercury thermometer.

Mercury will solidify (freeze) at -38.83 °C (-37.89 °F) and so may only be used at higher temperatures. Mercury, unlike water, does not expand upon solidification and will not break the glass tube (unlike water, when it is frozen then quickly heated, will break, making it difficult to notice when frozen). If the thermometer contains nitrogen, the gas may flow down into the column and be trapped there when the temperature rises. If this happens, the thermometer will be unusable until returned to the factory for reconditioning. To avoid this, some weather services require that all mercury-in-glass thermometers be brought indoors when the temperature falls to -37 °C (-34.6 °F). In areas where the maximum temperature is not expected to rise above -38.83 °C (-37.89 °F), a thermometer containing a mercury-thallium alloy may be used. This has a solidification (freezing) point of -61.1 °C (-78 °F).

Today, many mercury-in-glass thermometers are still widely used in meteorology; however, they are becoming increasingly rare for other uses, as many countries have banned them outright from medical use. Some manufacturers use galinstan, a liquid alloy of gallium, indium, and tin, as a replacement for mercury. 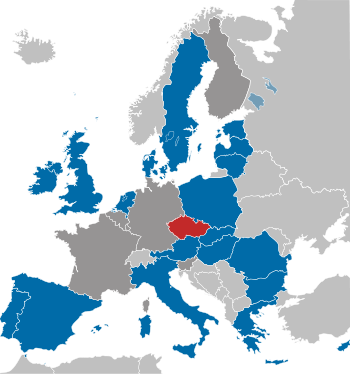 Map of the countries of the European Union that banned mercury-in-glass thermometers according to Directive 2007/51/EC as of 28 April 2008. Countries in blue have made legal bans on the issue, countries in gray are of unknown status at the present, and countries in red declared that said "Member State does not consider national execution measures necessary."[3]

The typical "fever thermometer" contains between 0.5 to 3 g (.3 to 1.7 dr) of elemental mercury.[4] Swallowing this amount of mercury would, it is said, pose little danger but the inhaling of the vapour could lead to health problems.[5]

By the Philippines Department of Health’s Administrative Order 2008-0221, all mercury equipment from hospitals, including mercury-in-glass thermometers, will be phased out in the Philippines by September 28, 2010. Even before the order was released, 50 hospitals have already banned mercury from their establishments. Among these fifty hospitals, the Philippine Heart Center was the first one to do so. San Juan de Dios Hospital, Philippine Children’s Medical Center, San Lazaro Hospital, Ospital ng Muntinlupa, Lung Center of the Philippines, the National Kidney and Transplant Institute, Manila Adventist Medical Center and Las Piñas Hospital also made steps to ban the toxic chemical. The country was the first one to make a step to ban mercury from its health care system in Southeast Asia.[9][10]