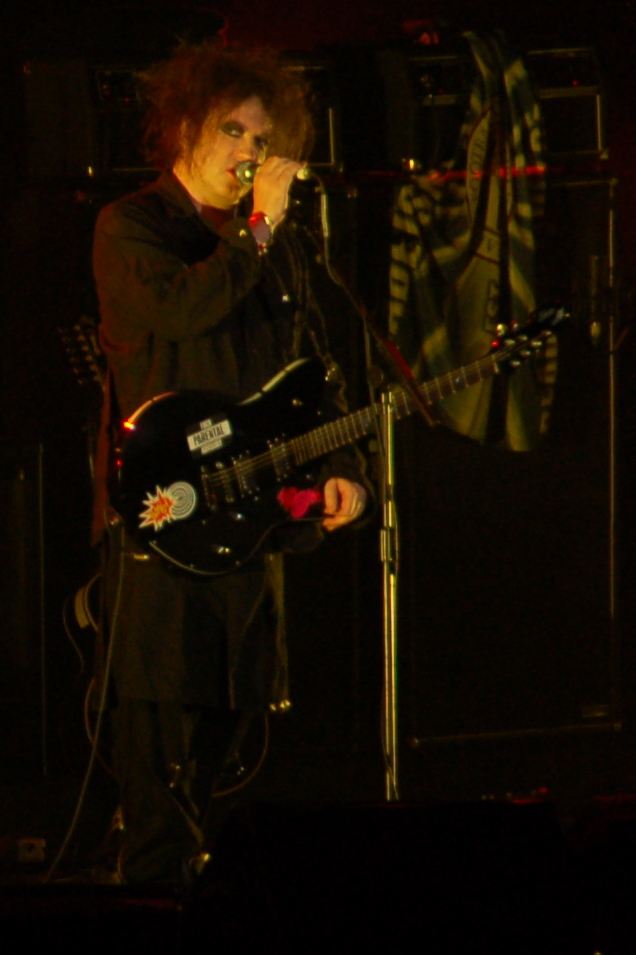 Robert James Smith (born , in ) is an English , and , and has been the lead singer of rock band since its founding in 1976. NY Rock calls him "'s unkempt of doom and gloom", and describes his songs as "somber introspection over lush, brooding guitars".

Role in The Cure

Smith has written or co-written the bulk of The Cure's music and lyrics in a career spanning 30 years. When the Cure was first formed, Smith did not intend to become the lead vocalist; he only began singing after the original singer left and the group could not find a suitable vocalist. During the late 1970s and into the '80s, Smith composed some of The Cure's songs on a , and recorded a complete demo of the song "10:15 Saturday Night".

Smith is the only member of the band who has stayed on from the beginning. With Lol Tolhurst, he wrote songs such as singles "Lovecats," "Let's Go to Bed", and "The Walk". He also wrote the album "The Top" between stints as ' guitarist. Smith has co-produced most of the band's material.

Robert Smith is the third of four children born to Alex and Rita Smith. His siblings are Richard, Margaret and Janet. Janet is married to , the "second" guitarist of The Cure; he and Smith switch between playing lead and rhythm guitars.

Smith was raised as a Catholic and went to Notre Dame Middle School and St. Wilfrid's Comprehensive School in . He was an accomplished student who maintained high marks, but after he began playing guitar at the age of 11 his primary focus quickly became his music. He was influenced by , , , , and .

Smith met Mary Poole in school when he was 14 years old. They married in 1988. Smith wrote one of the Cure's signature compositions, "Lovesong", as a wedding present to his wife.

Smith helped popularize the "goth" style of dress with his trademark smeared red lipstick and messy black hair, black clothes, and sneakers, a look that he began sporting in the early 1980s. According to bassist , Smith first used 's lipstick after using . However, Smith claims that he has worn make-up since he was young. He was also quoted as saying, "It's so pitiful when 'goth' is still tagged onto the name The Cure." [cite web|url=http://stereogum.com/archives/robert-smith-not-goth-has-writers-block_004111.html|title=Robert Smith: Not Goth, Has Writer's Block |accessdate=2008-06-28|date=2006-06-12|publisher=Stereogum]

His songwriting for the band's early albums &mdash; particularly "Faith", "Pornography", and the later album "" &mdash; centered around themes of depression, loneliness, and isolation. The sombre mood of these early albums, along with Smith's onstage persona, cemented the band's "gothic" image.

The band's aesthetic went from gloomy to beginning with the album "The Top". In 1986, Smith further altered his image by appearing onstage and in press photos sporting short spiky hair and polo shirts (this can be seen in "In Orange ", a concert in the south of France released on video 1987).

Although Smith's public persona suggests a depressed image, he has said that his songs do not convey how he feels all, or even most, of the time.:"At the time we wrote "Disintegration"...it's just about what I was doing really, how I felt. But I'm not like that all the time. That's the difficulty of writing songs that are a bit depressing. People think you're like that all the time, but I don't think that. I just usually write when I'm depressed."

In the band's earliest period, Smith used a soft vocal style on the demos of "10:15 Saturday Night" and "Boys Don't Cry" and the frenetic punk style of "I Just Need Myself". Both of those styles were left behind as a third emerged during the production of the band's debut album, "". This new sound, which can be heard on most of the final versions of songs from that period, became the signature Smith sound, which he generally employed until the album "". Around that time, Smith said he wanted to improve his singing, the opposite of his goal in 1984; he remarked in the documentary "Ten Imaginary Years" that he tried to sing badly for the album "The Top".

In an interview in 2000, Smith said that "...there is one particular kind of music, an atmospheric type of music, that I enjoy making with the Cure. I enjoy it a lot more than any other kind of sound. When Smith was asked about the 'sound' of his songwriting, Smith said that he did not "...think there is such a thing as a typical Cure sound. I think there are various Cure sounds from different periods and different line-ups."

Smith has also been involved in other musical projects, including a stint with Siouxsie & the Banshees and a with Steven Severin called . He has also contributed to a number of independent projects and performances, among them the B-side of the "Faith" cassette, a 30-minute instrumental track from a movie project, "". He was responsible for the release of two singles by Crawley based artists in the early 80's: "Cult Hero" a local postman and the "Obtainers" who were two local school kids.

In 1980, Smith sang backing vocals on the song "The Affectionate Punch", by The Associates, on their 1980 debut album with the same title. At the time, The Associates were also signed to Fiction Records. The Cure song, "Cut Here", is about The Associates' singer, 's suicide.

In 1998, Smith formed a "one-off" side project with and under the name , releasing the track "A Sign From God" for the movie .

In 2000, Smith collaborated on the track 'Yesterday's Gone' with David Bowie side man Reeves Gabrels on his solo album "Ulysses (Della Notte)".

In 2003, Smith collaborated with the band on the track "" off their self-titled album. In 2004, remixed "A Forest" featuring Smith on vocals. That year, he also provided vocals for for the club hit "Da Hype".

In 2004, he stood in as one of three guest presenters for on , a week before Peel's death. In November, he joined Placebo onstage at their Wembley arena gig to sing that band's hit song "Without You I'm Nothing", as well as the Cure staple "Boys Don't Cry." He also co-wrote and supplied vocals for the Tweaker song "Truth Is." That same year, Smith collaborated again with Junior Jack on a remix of "Da Hype", featured on the album "Trust It". He was also featured as a vocalist and co-writer on 's "Perfect Blue Sky."

In 2005, Smith teamed up with , lead singer and lead guitarist of both and , to do a cover of the ' "To Love Somebody" on Corgan's first solo release, "".

In 2007, Smith made a guest appearance in the performance of the alternative band , in which he and Korn's frontman sang a mixed version of the songs "In Between Days" and "Make Me Bad".

For over two decades, Smith has suggested that he may do a solo album. Smith has been widely credited with writing the songs "Homesick" and "Untitled" as solo tracks; Smith denied this, crediting those songs to other members:

:"I didn't write "Homesick" and I didn't write the music too. It's another misconception. […] Out of the 12 songs on the CD, I think I only wrote six musically... "Untitled"... (to Simon [Gallup] ) You wrote that one ? ...It was Roger [O'Donnell] . So it [("Disintegration")] couldn't have been a solo album and if I'd done on my own it wouldn't have sounded anything like The Cure anyway apart from my own voice. "The Top" album could have been a solo album but it's not true the way we worked in studio […] "

For the 2004 Curiosa festival, Smith personally selected 11 bands to open for The Cure. It began with a concert in on July 24 and ended in on August 29. Those bands included Interpol, , and Mogwai. The concert had two stages, with the headlining bands on the main stage and the lesser known bands on the second stage. Bands and artists on the second stage changed throughout the tour, and included Muse, Cursive, , Thursday, , , and .

*Smith voiced himself in "", an episode of "" in which he has superpowers and manifests himself as a monster similar to "Mothra," where he defeats in a battle. Series co-creator is a big fan of The Cure. [http://spschat.com/SPS1Commentary/DiscFive/01%20-%20Mecha-Streisand.mp3]
*In "" episode "", Smith's tears are mentioned as an ingredient for the most powerful hairspray known to man (Goth Juice).
*Smith has expressed his distaste for (lead singer of ), stating that "if Morrissey says don't eat meat, then I'll eat meat because I hate Morrissey." [ [http://www.compsoc.man.ac.uk/~moz/faq/faqtrivi.htm "Does Robert Smith of The Cure hate Morrissey?"] ] Although has stated that he likes Morrissey's music, he also said that Smith was justified in his ire as their rivalry began when Morrissey made "a very uncalled for remark concerning Robert in the English press." [http://www.levinhurst.com/cgi/Blah/Blah.pl?b=cc,m=1122314484]
* played a cover of "A Letter To Elise" at the MTV ICON ceremony, in tribute to Smith.
*Smith provides backing vocals to 's cover of "To Love Somebody" by the Bee Gees from his solo album TheFutureEmbrace (2005). Corgan and his band The Smashing Pumpkins are fans of The Cure and a cover of 'A Night Like This' appears as a B-side to the single of 'Bullet With Butterfly Wings', also being included in 'The Aeroplane Flies High' box set.
*He has also done a voice cameo appearance as a character on the show "".
*In "Take It Like a Man," the of , Boy George said he was saddened when Robert Smith ridiculed the music of . Boy George then referred to Robert Smith as "a blob."

* [http://www.picturesofyou.us/members/robert.htm Robert at Pictures of You]
* [http://www.stereowarning.com Robert Smith interview at Stereo Warning]