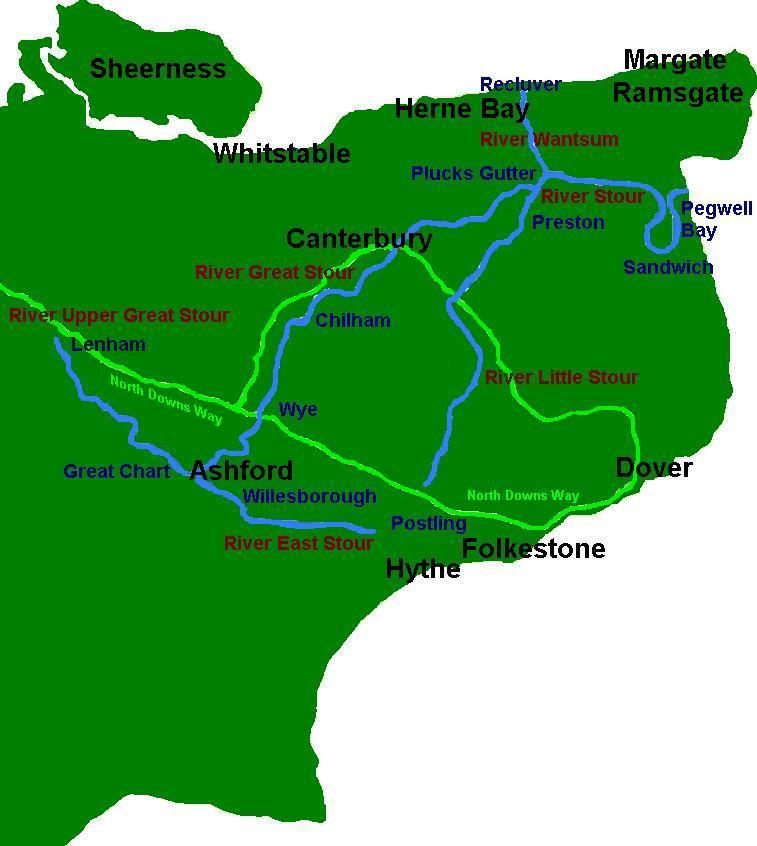 image_size =
caption = River Stour and Tributaries
origin = and
mouth =
basin_countries =
length =
elevation =
mouth_elevation =
discharge =
watershed = The River Stour (IPAEng|ˈstaʊə) is a the generic name for a group of rivers in , . The Stour has Kent's second largest catchment area (the having the largest). Both and are situated on it.

The lower half of the river is tidal; its original mouth was on the , an important sea route in medieval times. The river has three major tributaries, and many minor ones. For much of its length it and flows in a generally south-west to north-east direction.

Course of the river

The source, of what is known at that point as the Great Stour, is near , within a short distance of the River Len, a tributary of the Medway. That source is on the Greensand ridge and at first the river flows along the Low Weald valley at the foot of the ridge in a southeastward direction: three small streams enter from the north, having their headwaters on the ridge, before reaching a point where the river turns to the north east.

The town of marks the start of the middle section of the river, and the point where the several tributaries enter, the largest of which is the East Stour river from its source near . Now the Stour breaches the ; for most of this distance there are no tributaries. After the Brook stream enters from the right there is now fifteen miles (24km) to , where the river flows past the north end of the city. , three miles (4.8km) further still, is the upper limit to which tides reach.

Beyond Fordwich, at the hamlet of ,TR 26943 63444 Coord|51.32480|1.25590|display=inline|format=dms the second of the large tributaries enters the main river: the 18.9 mile (30.2km) , which begins life as the springfed Stream. The twin villages in the parish of (West and East) mark the original point where the Stour entered the erstwhile Wantsum Channel, a used for hundreds of years until silting and land reclamation turned the sea channel into a large drainage ditch. At this point the third large tributary, the 8.4 mile (13.4km) (named locally as the ‘’Fishbourne Stream’’) enters with the Wantsum Channel .Here the river turns southwards and, after making a loop to take it in a northward direction, it enters the at . The "Stonar Cut" obviates the need for seagoing craft to take the longer route around the loop.

From the tidal limit at Fordwich to the sea the river is fringed with marshes. Most of them are located on what was the floor of the Wantsum Channel, whilst those to the south lie behind the sand dunes of the Sandwich Flats. These marshes are criss-crossed with drainage ditches. The principal marshes are those of Chislet, within the ancient estuary of the river; Wade, west of ; and Ash Level.

In the mid-18th century it became necessary to alleviate the problem of flooding along the lower course of the Stour. The action of tidal drift of shingle along the coast had resulted in the huge loop at the estuary end of the river, and on 29th November 1774 an was passed to bypass the loop at it narrowest end, at . The works, to become known as the "Stonar Cut", made use of an existing sluice to cut across the neck of the loop, and were completed in 1776.

During huge volumes of both troops and supplies were needed on the Continent and, in the utmost secrecy, a new port was built at . Landing facilities along the Cut were built, and the was extended to service the port. Nothing now remains of much of those works, and the Cut has been allowed to return to its natural state. [ [http://www.thanetarch.co.uk/Virtual%20Museum/2_Galleries/G11%20Content/Virtual_Museum_Gallery_11_Display_1.html Museuam of Thanet] ]

Settlements on the river vary in size. The four most important are Ashford, sited at a crossing point of the river and on ancient track ways; , at a junction of four , where their connected with the sea; , the of Canterbury and tidal limit; and the once-thriving port of . The villages of Wye, and lie on the stretch through the North Downs gap, Wye being a fordable crossing. Beyond Fordwich are the smaller settlements of and ; and Stourmouth.

In Roman and medieval times the river was an important highway, connecting Canterbury with the Continent. Fordwich became important to shipping after the silting up of the southern entrance to the English Channel.

In 1831 wrote his ‘’Historical Account of the Navigable Rivers, Canals and Railways’’ [ [http://books.google.com/books?id=eUqIucVmZjwC&pg=PA131&lpg=PA131&dq=river+stour+priestley+1831&source=web&ots=DsBV9_9VM-&sig=01dHiGi95Txo-Nt-mv7ib9AVCrs Canterbury Navigation, or River Stour, Josephn Priestley 1831] ] . In it he described in one section the ‘’Canterbury Navigation, or River Stour’’. He includes an account of its course and the improvements being carried out at that time to assist navigation, and details of new port facilities.

Both roads and railways make use of the river. The Watling Street link to (’’Rutupiae’’) and their link from Canterbury southwards made use of the North Downs gap. The rail links from Canterbury to the and also to , and the main follow identical routes.

The 51.5 mile (82.4km) follows the river for much of its length [ [http://www.kent.gov.uk/leisure-and-culture/explore-kent/walking-cycling-and-riding/stour-valley-walk.htm Stour Valley Walk] ] .