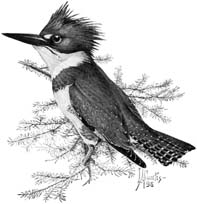 Kingfishers are small bright colored s of the three families Alcedinidae (s), Halcyonidae (s), and Cerylidae (s). There are about 90 species of kingfisher. All have large heads, long, sharp, pointed bills, short legs, and stubby tails. They are found throughout the world.

The etymology of "kingfisher" is obscure; the term comes from "king's fisher", but why that name was applied is not known [cite web
title = Online Etymology Dictionary
url = http://www.etymonline.com/index.php?search=king&amp;searchmode=term
author = Douglas Harper
year = 2001
accessdate = 2007-07-14] .

The of the three families is complex and rather controversial. Although commonly assigned to the order , from this level down confusion sets in.

The kingfishers were traditionally treated as one family, Alcedinidae with three subfamilies, but following the 1990s revolution in bird taxonomy, the three former subfamilies are now usually elevated to familial level. That move was supported by chromosome and DNA-DNA hybridisation studies, but challenged on the grounds that all three groups are with respect to the other . This leads to them being grouped as the suborder Alcedines.

The tree kingfishers have been previously given the familial name Dacelonidae but Halcyonidae has priority. This group derives from a very ancient divergence from the ancestral stock.Even tropical has only five species plus wintering Belted Kingfisher. In comparison, the tiny n country of has eight resident species in its 120 by 20 mi. (192 by 32 km) area.

The smallest species of kingfisher is the African Dwarf Kingfisher ("Ispidina lecontei"), which averages at 10.4 g and 10 cm (4 inches). The largest overall is the ("Megaceryle maxima"), at an average of 355 g (13.5 oz) and 45 cm (18 inches). However, the familiar n kingfisher known as the ("Dacelo novaeguineae") may be the heaviest species, since large individuals exceeding 450 g (1 lb) are not rare.

Kingfishers live in both woodland and wetland habitats. Kingfishers that live near water hunt small by diving. They also eat , s, and s. Wood kingfishers eat s. Kingfishers of all three families beat their prey to death, either by whipping it against a tree or by dropping it on a stone.Fact|date=August 2008

They are able to see well both in air and under water while swimming. Their eyes also have evolved an egg-shaped lens able to focus in the two different environments.

The tropics and are the core area for this group. and north of are very poorly represented with only one common kingfisher ( and respectively), and a couple of uncommon or very local species each: ( and in the southwest USA, and in SE Europe).