Mary Hamilton
This article is about the song. For the serial bigamist, see Mary Hamilton (bigamist).

"Mary Hamilton" and "The Fower Maries" (accent on the first syllable of Maries; fower is Scots for "four") are two common names for a famous, apparently fictional sixteenth century ballad from Scotland.

In all versions of the song, Mary Hamilton is a lady-in-waiting to the Queen of Scots, but precisely which Queen is a mystery. She has a sexual relationship with the King of Scots that results in the birth of a child. Mary kills the infant – in some versions by drowning, in others by exposure – and the remainder of the song recounts thoughts about her life and impending death. Most versions of the song are set in Edinburgh, but the Joan Baez version, probably the best known, is set in Glasgow.

Many versions of the song end (in English translation, as sung by Baez):

Last night there were four Marys;
Tonight there'll be but three:
There was Mary Beaton and Mary Seton
And Mary Carmichael and Me.

This would seem to indicate Mary Hamilton was one of the famous "Four Maries" chosen by Mary of Guise, queen consort of James V, King of Scots, to be companions to her daughter – child queen Mary Stuart, Queen of Scots – who succeeded her father when she was six days old, but none of the real four Maries was a Hamilton. The surnames of the real Maries were: Beaton, Seton, Fleming, and Livingston.

Moreover, in many versions of the song, the queen is called "the auld Queen", indicating that she is at least middle-aged, if not older, but the reign of Mary Stuart began six days after she was born and ended with her abdication in 1567 at the age of twenty-five; therefore, she could not have been "the auld Queen". The term might, however, refer to precedence rather than age. Before Mary Stuart was Queen of Scots in her own right, her mother, Mary of Guise, was Queen of Scots, as consort to James V. Three generations earlier, James II's wife was also Queen Mary. 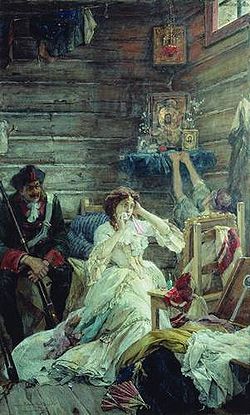 There was a historic incident in 1719 involving one Mary Hamilton that occurred not in Scotland – by which time the Hanovers had succeeded the Stuarts – but in Russia. In this case, Mary was Catherine I of Russia's lady-in-waiting and the mistress of tsar Peter the Great and his aide-de-camp Ivan Orlov. In 1717, it was discovered that the woman had had two abortions, and drowned her third infant after birth. On 14 March 1719, she was decapitated for infanticide in St. Petersburg. Her head was preserved and displayed in the Kunstkamera. At that time, Charles Wogan was in Russia on a mission from James Francis Edward Stuart, and through him the news might have reached Scotland[1].

Since ballads of different times about different people often are recycled, many scholars speculate that the Russian event, including the name Mary Hamilton, may have fused with the original song, which may itself have been an earlier fusion of other earlier ballads.[2].

The ballad was catalogued by Francis James Child (Child Ballad # 173).

"Mary Hamilton" in A Room of One's Own

In her highly influential text, A Room of One's Own, Virginia Woolf alludes to the characters of the ballad. By name, she refers to Mary Beton, Mary Seton, and Mary Carmichael as recurrent personae, leaving only Mary Hamilton, the narrator of the ballad, unmentioned. Mary Beton possesses the prominent role in Woolf’s extended essay, as she serves as the speaker.

According to her narrator in A Room of One’s Own, “’I’ is only a convenient term for somebody who has no real being.” A few sentences later, the narrator returns to the concept of identity and subjectivity and invokes the subjects of the ballad for the first time: “Here then was I (call me Mary Beton, Mary Seton, Mary Carmichael or by any name you please – it is not a matter of importance)...”[3]

Mary Beton serves as the narrator throughout A Room of One’s Own. The six chapters of the essay follow Mary Beton's walks through Oxbridge grounds and London streets, and her mental explorations of the history of women and fiction. The name reappears in the character of the narrator’s aunt, who serves as both the namesake and benefactor of Mary Beton.[4] Woolf is able to detach herself from the narrative voice of the essay through the use of Beton.

Mary Seton is a friend of Mary Beton at the fictitious Fernham College (modeled after Cambridge’s Newnham and Girton Colleges). It is partially through her conversations with Seton that Beton raises questions about the relationship between financial wealth and the opportunities for female education. Speaking of Mary Seton’s mother, the narrator states, “if she had left two or three hundred thousand pounds to Fernham, we could have been sitting at our ease tonight and the subject of our talk might have been archaeology, botany, anthropology, physics, the nature of the atom, mathematics, astronomy, relativity, geography.”[5]

Mary Carmichael plays the role of a fictitious author referenced by the narrator in A Room of One’s Own.[6] Her fabricated novel, Life’s Adventure, allows Woolf to introduce the concept of female relationships. Mary Carmichael may also evoke the idea of the real author and birth control activist Marie Carmichael (pseudonym for Marie Stopes) and her novel Love’s Creation.

Yest're'en* the Queen had fower Mary's
The nicht* she'll hae but three
There was Mary Seton and Mary Beaton,
And Mary Car-Michael and me.

But I wish I could lie in our ain kirkyard*
Beneath yon old oak tree
Where we pulled the rowans and strung the gowans?*
My brothers and sisters and me

Yest're'en* the Queen had fower Maries
The nicht* she'll hae but three
There was Mary Seton and Mary Beaton,
And Mary Car-Michael and me.

Yest're'en* the Queen had fower Maries
The nicht* she'll hae but three
There was Mary Seton and Mary Beaton,
And Mary Car-Michael and me.

There was Mary Seton and Mary Beaton,
And Mary Car-Michael and me.