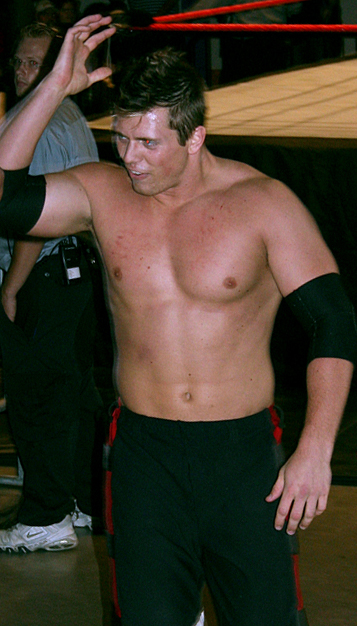 Michael "Mike" Mizanin (born October 8, 1980) better known by his The Miz, is an American professional wrestler working for (WWE) on its "ECW" brand, and also makes appearances on "SmackDown!".

Mizanin, a native of , graduated from and attended , [Citation|last=Nwokeabia|first=Joannah|title=Reality TV rules Real World's "The Miz" on keeping it real |url=http://media.www.commonwealthtimes.com/media/storage/paper634/news/2005/09/22/Spectrum/Reality.Tv.Rules-993822.shtml |publisher="The Commonwealth Times"|date=2005-09-22|accessdate=2007-11-17] where he was a member of the Fraternity, and studied business at the .

It was during an episode of "The Real World" that Mizanin first displayed an alter ego known as "The Miz".

Mizanin had a number of relationships during his various "Challenge seasons"; during "The Gauntlet" he dated of ', during "The Inferno" he had a relationship with Kendal Sheppard of ', and during "Battle of the Seasons" he had another brief relationship with Tara McDaniel of "". He's also known for his roller coaster friendship with on "The Real World" and various subsequent s.

On April 20, 2007, he appeared on the game show "Identity", where he appeared as a stranger, and contestant John Kim correctly identified his identity as a professional wrestler.

Pursuing the goal of becoming a professional wrestler which he had harbored from an early age, Mizanin joined , where he trained in the Ultimate University. He made his in-ring debut in 2003.

In October 2004, Mizanin entered the fourth season of "Tough Enough", a televised competition which would award the winner a contract and the sum of $1,000,000. Despite coming last in an tournament on November 25, 2004, Mizanin outlasted six other wrestlers. On December 12, 2004 at "Armageddon 2004", Mizanin faced the other remaining entrant, , in a three round "Dixie Dogfight" (boxing match). Neither man achieved a , and the contest was awarded to Puder on the basis of crowd reaction. On the December 16, 2004 episode of "SmackDown!", Puder was announced as the winner of "Tough Enough" by head trainer . [cite web|url=http://www.onlineworldofwrestling.com/results/smackdown/041216.html|title=WWE SmackDown! - December 16, 2004 Results|publisher=OnlineWorldOfWrestling.com]

Despite losing the "Tough Enough" contest, Mizanin had piqued the interest of WWE, and he was eventually offered a developmental contract. Mizanin was sent to to train under , relocating to in the process. In July 2005 he wrestled two dark matches for WWE, teaming with former "Tough Enough" champion to face The Highlanders. On December 1, 2005, Mizanin defeated in the finals of a tournament to crown the first Deep South Heavyweight Champion. [cite web|url=http://www.onlineworldofwrestling.com/results/deepsouth/2005.html|title=Deep South Wrestling - December 1, 2005 Results|publisher=OnlineWorldOfWrestling]

He continued to tag with Matt Cappotelli throughout the second half of 2005 in WWE dark matches and house shows until Cappotelli, nominally of , was diagnosed with a brain tumor after an injury at a taping in December 2005.

On January 3, 2006, it was reported that Mizanin was transferred to . On the January 18, 2006, OVW TV show, Mizanin made his debut as "The Miz", with a "Miz TV" segment, where he was shown talking backstage. He talked with Chris Cage, who was supposed to be his tag team partner in OVW, but Cage said he was quitting the business after someone had cut off 's hair and wished Mizanin good luck with his wrestling career. As Chris Cage left, Mike then met with his old tag team partner and as later that night they had a six person tag team match as , , and Mike Mizanin defeated The Highlanders.

On the January 28, 2006, edition of the OVW TV show, The Miz wrestled his first match against Rene Dupree. Chet the Jet and Seth Skyfire came to ringside during the match and acted as a diversion to allow Rene Dupree to gain the upper hand on The Miz. As The Miz was about to finish Rene Dupree, Chris Cage came out and attacked Seth Skyfire. When The Miz left the ring to try to control Chris Cage, he ended up losing the match by count out.

At the February 8, 2006 TV taping, The Miz and Chris Cage captured the , defeating Chet the Jett and Seth Skyfire. [cite web|url=http://www.onlineworldofwrestling.com/results/ovw/2006.html|title=Ohio Valley Wresting - February 8, 2006 Results|publisher=OnlineWorldOfWrestling] In what was deemed a "disciplinary move," WWE released Chris Cage over the weekend of March 18, 2006 making it necessary for Miz and Cage to drop the titles. On March 19, 2006, Deuce Shade defeated The Miz in a singles contest to win the titles for his team "The Untouchables" (Deuce Shade & Domino). On June 8, 2007 he lost to Atlas DaBone at OVW's second Summer Sizzler Series event at Six Flags Kentucky Kingdom in Louisville, Kentucky.

On March 8, 2006, WWE.com featured a video of "The Miz" stating that he was headed to "Friday Night SmackDown!" and throughout April, "SmackDown!" aired vignettes hyping his debut. However, when Mizanin actually attempted to make his debut on the April 21, 2006 edition of "SmackDown!" he was () barred from entering the arena by "network executive" Palmer Cannon who told him that he had been "canceled" before having security escort him from the premises. [cite web|url=http://www.wwe.com/shows/smackdown/archive/04212006/|title=Something to celebrate|date=April 21, 2006|publisher=WWE|accessdate=2006-04-21]

Miz debuted as the "host" on June 2, 2006, [cite web|url=http://www.wwe.com/shows/smackdown/archive/06022006/|title=All hail the king|author=Brett Hoffman|date=June 2, 2006|publisher=WWE|accessdate=2006-06-02] announcing the planned card at the top of the show and attempting to hype up the crowd. Other "host" duties included backstage interviews and hosting a bikini contest. The hosting duties seemed sporadic at best, with some weeks having little to no Miz at all.

Starting in July, Miz, along with , became host of the annual Diva Search competition appearing on both "RAW" and "SmackDown!". At the start of his new hosting duties, in front of the live "RAW" crowd, Miz was noticeably nervous and flubbed his lines, including calling contestants by the wrong name. Though he seemed to get better as the weeks went on, he quickly became the butt of on-air jokes by other WWE Superstars.

After the end of the Diva Search competition, The Miz returned exclusively to "SmackDown!" and adopted a cocky heel persona, starting his in-ring competition with a win over Tatanka on September 1, 2006. [cite web|url=http://www.wwe.com/shows/smackdown/archive/09012006/|title=Signing Bonus|author=Brett Hoffman|date=September 1, 2006|publisher=WWE|accessdate=2006-09-01] After this win he, along with commentator , began to note whenever possible that he was "undefeated", though he only wrestled five matches over the next two months, defeating such superstars as , [cite web|url=http://www.wwe.com/shows/smackdown/archive/09082006/|title=All the King's men|date=September 8, 2006|author=Brett Hoffman|accessdate=2007-11-17|publisher=WWE] and Scotty 2 Hotty. [cite web|url=http://www.wwe.com/shows/smackdown/archive/09152006/|title=Chaos in the Kingdom|date=September 15, 2006|author=Steven Schiff|accessdate=2007-11-17|publisher=WWE] At the same time he began a feud with Diva Search winner , who spurned his advances on more than one occasion, leading to Miz helping Kristal defeat her in various competitions. Soon, however, Miz and Kristal found themselves being stalked by the returning Boogeyman, beginning a feud during which The Boogeyman handed Miz his first defeat at "Armageddon". [cite web|url=http://www.wwe.com/shows/armageddon/history/2006/matches/347294441/results/|title=A worm welcome|date=December 17, 2006|author=Noah Starr|accessdate=2007-11-17|publisher=WWE]

Following a brief absence from TV, Miz returned to "SmackDown!" to host an interview segment called "Miz TV". After the segment went nowhere, Mizanin returned to wrestling with a more intense style and began to pick up wins once again. On the June 11, 2007 edition of "RAW", Mizanin faced off against Snitsky in a match to determine a draft pick for "SmackDown!". Snitsky easily squashed Mizanin to give "ECW" the pick, but after constantly attacking The Miz after the match, the referee reversed the decision and awarded the match to Mizanin, thus allowing "SmackDown!" a draft pick.

On November 16, on returned to Friday Night Smackdown, Miz became one half of the WWE Tag Team Champions with John Morrison when they defeated and MVP in a title match, which marks Miz's first taste of WWE gold.

Miz was drafted from "SmackDown!" to "ECW" on June 17, 2007 as part of the 2007 Supplemental Draft. [cite web|url=http://www.wwe.com/inside/news/supplementaldraft07|title=2007 Supplemental Draft results|date=June 17, 2007|author=Louie Dee|accessdate=2007-11-17|publisher=WWE] He was absent from the first few weeks of "ECW", though he was the subject of backstage mentions between matches and had several short "Miz TV Crashes ECW" video segments. He made his debut on the July 10 edition of "ECW" in a match against Nunzio, which he won. [cite web|url=http://www.wwe.com/shows/ecw/archive/07102007/|title=Nitro and Punk continue to roll toward The Bash|date=July 10, 2007|author=Corey Clayton|accessdate=2007-11-17|publisher=WWE] Following this match, Extreme Exposé began expressing admiration in him and gave him a lap-dance, starting a new gimmick for him of a self-proclaimed "chick magnet". Extreme Expose then became managers for The Miz. He then began a feud with , after began to fall in love with Balls. On the October 2 edition of "ECW", it was revealed that Miz kayfabe owned the contracts of Kelly Kelly, and Brooke Adams, and used this excuse to stop Kelly from going out with Mahoney. [cite web|url=http://www.wwe.com/shows/ecw/archive/10022007/|title=Big results|date=Andrew Rote|author=October 2, 2007|accessdate=2007-11-17|publisher=WWE] He was voted at Cyber Sunday to face , for the but lost the match. [cite web|url=http://www.wwe.com/shows/cybersunday/matches/52676101/results/|title=Miz-match? CM Retains|date=October 28, 2007|author=Andrew Rote|accessdate=2007-11-17|publisher=WWE]

Along with Morrison, The Miz co-hosts a weekly segment on WWE.com called "The Dirt Sheet", where Miz and Morrison make fun of the WWE roster and show off their promo skills. Since holding the titles, WWE downplayed the angle of Miz and Morrison disliking each other, and since has portrayed them as friends.The team had many successful title defenses over the next few months, before dropping the titles to at the Great American Bash in a Fatal Four-Way match which also featured and Finlay and Hornswoggle. Neither Miz nor Morrison were pinned, as Hawkins pinned Jesse to win the titles. [citeweb|url=http://www.wwe.com/shows/thegreatamericanbash/matches/7599484/results/|accessdate=2008-07-22|date=2008-07-21|last=Passero|first=Mitch|title=Out of the shadows, into the golden light|publisher=WWE] They have recently started a feud with Cryme Tyme which started on the Internet and then going to Monday Night RAW.

*The Dirt Sheet
**In February of 2008 Miz and his tag team partner John Morrison were given a streaming segment on the WWE website named "the Dirt Sheet" in which they mocked other wrestlers and facets of pop culture. By May the show was the most watched show on the website.fact|date=July 2008