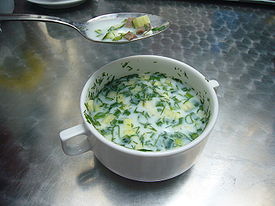 Okroshka made with kefir 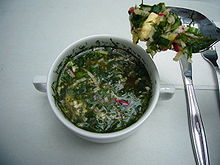 Okroshka made with kvass

Okróshka (Russian: окрошка) is a cold soup of Russian origin[1] that is also found in Ukraine. The name probably originates from "kroshit'" (крошить), which means to crumble into small pieces.

The classic soup is a mix of mostly raw vegetables (like cucumbers and spring onions), boiled potatoes, eggs, and a cooked meat such as beef, veal, sausages, or ham with kvass, the so-called bread drink, which is a mildly alcoholic beverage made from fermented black or rye bread. Okroshka is usually garnished with sour cream. Later versions that appeared in Soviet times use light or diluted kefir, vinegar, mineral water, or even beer instead of kvass.

The ingredients are diced and then mixed with kvass just before eating; the ratio of chopped food to kvass is similar to that of cereal to milk. This allows the vegetables to retain their texture. For that same reason, even though the ingredients are similar to those in a Russian salad, the taste of okroshka is quite different from that of the salad.

Okroshka is mostly served in summer because the soup combines the refreshing taste of kvass and the lightness of a salad. Salt and sugar can be added according to taste.

Mix all ingredients in a large bowl. Let stand for 1 hour (in the fridge). Mix again and serve, cold.