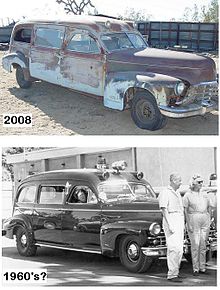 Early ambulances like this 1948 Cadillac were also used as hearses

A combination car was a vehicle built upon a (usually Cadillac) "professional car" chassis which could be employed either as a hearse or as an ambulance, and had the capability of being swapped between those roles without much difficulty. These vehicles were upgraded by coachbuilders such as Superior, Miller-Meteor, and Cotner-Bevington, and were typical of the era when funeral homes offered emergency ambulance service in addition to their primary trade.

Even if a "combo" has no flashing lights (mounted or concealed), siren, or two-way radio installed, an experienced vehicle collector can recognize it as such by it having systems to carry either a gurney or a casket, one or more foldable seats on one side in the rear compartment where a first-aid person can sit while looking after a patient on their way to the hospital, and a cabinet where first-aid supplies can be stored.

Also, the presence of ambulance technology made combos useful in the first call role, as a gurney is also used in that function.

Some combos were equipped with rotating roof beacons that could flash either yellow lights in processional mode, or both red and yellow lights in emergency response mode. Alternately, a hole on the roof was often supplied where a beacon could be bolted on an intermittent basis, a wire passing through to the driver's compartment where it could be plugged in when needed.

Combos employed more often or exclusively as ambulances were often fitted with ambulance markings and additional lighting. However, usage of passenger car or station wagon derived vehicles as ambulances became impractical in the US after c. 1980 due to upgraded equipment and interior measurement requirements imposed by US government regulators. Many such vehicles were donated or otherwise found their way to developing nations.

The Cadillac combination unit was made famous in Ghostbusters as the Ecto-1, a modified 1959 Miller-Meteor coach.