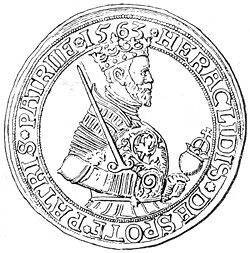 Ioan Iacob Heraclid (or Eraclid) (1511–1563), also known as Jacob Heraclides, was a Greek soldier and ruler of Moldavia from November 1561 to November 1563, most notable for being the first officially Protestant monarch in Eastern Europe.

Born on either Crete or Samos, he was the adopted son of a Despot of Samos (from whom he acquired his full name, along with a claim for legitimacy). Educated by John Laskarides, a scholar descended from the Imperial family of the Laskarides (see List of Byzantine emperors), Heraclid travelled over much of Europe. He fought as a mercenary in the Holy Roman Empire armies of Charles V, in his war against Henry II of France (the Italian War of 1551).

After their defeat in the Battle of Renty (1554), the Despot passed through Brussels on his way to Wittenberg. He had already adhered to Protestantism, and was an acqaintance of Philipp Melanchthon and other religious leaders.

He came to Moldavia in 1556, in service to Voivode Alexandru Lăpuşneanu, pretending to be a relative of Ruxandra's, Lăpuşneanu's wife. Heraclid befriended the usurper Moţoc and was forced to flee, first to Braşov, and then to the Transylvanian estate of Albert Laski. Laski was soon convinced to aid Heraclid in his bid for the throne, and even to pawn his lands as a loan to Despot.

Heraclid gathered military support - we see mention of a Hungarian or Transylvanian mercenary named Anton Szekelyi, and a Burgundian one named Roussel. His first attempt was obstructed by Lăpuşneanu's Polish overlord, Sigismund II of Poland. With help from Emperor Ferdinand I and the powerful Jewish trader Joseph Nasi, Despot managed to defeat the Moldavian forces in November 1561. Such a successful intervention was without precedent in Moldavian history, although it had been announced by the progressive decay of Princes' authority in the previous decade.

Manifestly breaking apart with tradition, Heraclid ruled as Despot of Moldavia, and it was the adoption of this unusual title that established his Romanian tautological moniker - Despot Vodă (The Despot Voivode or Despot the Voivode). He soon appeased the Ottoman Empire, Moldavia's suzerain, by agreeing to pay a tribute that was raised to the sum of 50,000 scudi, and maneuvered in Istanbul-proper by ensuring Valois support through the French ambassador to the Porte.

He made Lutheranism the state Church, offending the native Eastern Orthodox. They viewed him as an iconoclast due to his rhetoric against images, even though he did not, in fact, destroy any icons. This, together with Despot's decision to marry another foreigner (a Pole), new and increased taxes and the omnipotence of his foreign retinue led to a boyar conspiracy instigated by high dignitary (hatman) Ştefan Tomşa. In the meantime, his postponement of debt payments angered Albert Laski. Faced with a large-scale rebellion, Heraclid retreated to the fortress in Suceava and withstood a three-month siege. At the end of it, Despot was captured and was struck to death with a mace by Tomşa himself.

In 1562, Heraclid founded the Cotnari school, intended as a Renaissance academy, led by the Transylvanian scholar Ioannes Sommerus (who was also to be his biographer). The institution did not survive Despot's overthrow.