Infobox_Film
name =The Small One 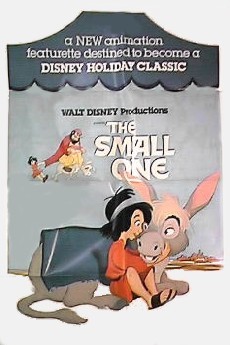 caption = Original one-sheet poster for "The Small One"
director =
producer =

"The Small One" is a created by , and was originally released to theaters in the on , , along with a re-release of Disney's 2nd , "Pinocchio".It started off as a children's book, by . Looking for an experimental plot to create into a cartoon, Disney came upon the story and brought it to vivid life. It was an experiment for the newer and younger animators, including .

The short is a story of a young boy, outside of , who must part with his best friend, an old named Small One. He brings it to , but no one is in need of a "scrawny donkey", save for a . And when things look bleak, Small One leads his friend back to the tanner's, ready to give his life. But new hope comes along, in the form of a gentle man, who buys Small One for his blessed wife.

Long ago, there was a boy who lived outside of . His father owned four donkeys. Three of these donkeys were young and strong. The fourth donkey was old and weak. But the boy loved him anyway. The old donkey's name was Small One. Everyday, the boy and the donkey would play together before they went to work, helping his father to collect firewood. The boy and his father took the four donkeys to work one morning, as they always did. But, this morning was different. Many times, the boy loaded Small One with small sticks, since Small One couldn't carry a heavy load. The three young donkeys had large heavy loads. Small One had trouble carrying stacks of small sticks and the boy helped carry them for him. That evening, the boy's father told the boy he had to sell Small One. Devastated, but understanding, the boy asked if he could be the one to sell his best friend. The father agreed and told him he had to sell him for one piece of silver.That night, the boy comforted Small One and promised to find him a gentle and loving master.The next morning, the boy took Small One to the market in Nazareth. In town, the boy could never be able to find a good home for Small One. Nobody wanted a scrawny donkey, save the tanner, who only wanted Small One for his skin. After a terrible day of failure, Small One led the boy back to the tanner's shop. As the boy wept, Small One tried to comfort him, knowing what awaited him inside the tanner's shop. Just as everything looked bleak, a kind man came up to the boy and asked if Small One was for sale. Friendly and kind, the man needed a gentle donkey to carry his pregnant wife. The boy sold the kind man his beloved donkey for a piece of silver and watched them make their way to , Mary riding on Small One's back, , leading him away.

*The Small One: He is a gentle donkey past his prime. Long years of working hard have made him weak. Though he eats as much as the other donkeys, he cannot handle the same loads. His right ear never likes to stay straight up, giving him that "Disney cuteness" rating. He has strong feelings for the Boy and would give his life to help him, as he almost does at the tanner's.
*Boy: He is about ten years old, roughly. Although he takes care of all the donkeys, Small One is his favorite. When his father tells him to sell Small One, the boy is devastated. Soon he accepts it. Though he loves the donkey, he accepts what his father tells him. He reassures Small One will have a gentle and loving master and he does.
*Father: The boy's father is not seen much at all. He is the one who sends the boy to sell Small One. He loves his son and deep down, he loves Small One too, but he knows they cannot afford to keep a donkey that cannot carry a large load.
*Three Merchants: These three men, one tall and skinny, one medium and skinny, and the last short and round, walk around the taking money from people, "for the bank". They are the ones who point the boy to the auctioneer.
*Auctioneer: He auctions in the market. At first he is angered that the boy brings Small One onto the stage and slightly embarrasses him, but when the boy tells him what Small One can do, the man decides to have some fun. He mocks and almost injures Small One with his weight. But when Small One sees his best friend pushed aside, he regains his strength and throws the man off of his back. The auctioneer chases them away.
*The tanner: Obviously, he does not care for animal's lives, since he wants to make leather out of Small One.
*The three donkeys: Small One's barn mates. They seem jealous that the boy spends more time with Small One than them.
*Joseph: His name is never mentioned in the entirety of the film, but you can pretty much guess that it is him who buys Small One in the end. The line "I need a gentle donkey to carry my wife to Bethlehem" says it all.
*Mary: You only see the silhouette of her riding on Small One, with Joseph leading him away, towards Bethlehem.