Caja del Rio (Spanish: "box of the river") is a dissected plateau, of volcanic origin, which covers approximately 84,000 acres of land in northern Santa Fe County, New Mexico, United States. The region is also known as the Caja, Caja del Rio Plateau, and Cerros del Rio. The center of the area is approximately 15 miles (23 km) west of Santa Fe, New Mexico. Most of the Caja is owned by the United States Forest Service and managed by the Santa Fe National Forest, Access is through New Mexico Highway 599, Santa Fe County Road 62, and Forest Service Road 24.

The landscape of the Caja del Rio Plateau is generally flat to rolling terrain, with numerous steep cones rising up to 800 feet above the plains. The highest points in the immediate area are Cerro Micho (7,326 feet), Montoso Peak (7,315 feet), Ortiz Mountain (7,219 feet), and Cerro Rito (7,296 feet) The entire plateau is within the watershed of the Rio Grande, although portions of the Caja drain into the larger river through two tributaries: the Santa Fe River and Cañada Ancha.

Virtually the entire perimeter of the Caja is ringed by cliffs or escarpments. White Rock Canyon forms the northwestern edge of the plateau. This canyon, through which the Rio Grande flows, has a maximum depth of over 1000 feet. Bandelier National Monument lies directly across the river to the west of the plateau. Along the eastern edge is Canada Ancha, an ephemeral stream that flows northward into the Rio Grande near Buckman. Another deep canyon (approximately 400 feet in depth) runs along the southern edge of the Caja, and is cut by the Santa Fe River. The canyon of the Santa Fe River separates the Caja from another land grant to the south: the Mesita de Juana Lopez Grant.

The western edge of the plateau is a large escarpment which is easily visible to highway traffic traveling north on Interstate 25 from Albuquerque to Santa Fe. After crossing the Santo Domingo Basin and the reservations of Cochiti and Santo Domingo Pueblo, the freeway makes a steep climb up the escarpment along a stretch of highway known locally as La Bajada (Spanish: "the descent"). This part of the plateau is dominated by Tetilla Peak (7,203 feet).

The Caja del Rio plateau is a monogenetic volcanic field, which includes approximately 60 cinder cones, spatter cones, and basalt outflows. The volcanism can be explained by the field's location, which is very close to the intersection of the Rio Grande Rift and the Jemez Lineament. The Rio Grande Rift is a result of extensional, (or divergent) tectonic forces exerted upon the American Southwest. This feature runs southward from the vicinity of Leadville, Colorado, through the entire state of New Mexico, through the vicinity of El Paso, Texas, and into Chihuahua, Mexico. The Rift began forming approximately 30 million years ago during the late Oligocene Epoch. The Jemez Lineament is another, older feature, which also represents a linear weakness in the crust. The Lineament trends southwest to northeast, and underlies a string of volcanic features across Arizona and New Mexico. Those features include the San Carlos volcanic field, Springerville volcanic field, Zuni-Bandera volcanic field, Mount Taylor volcanic field and the Raton-Clayton volcanic field. These structural weaknesses create a thinned crust, and pathways for intrusion by magma originating in the mantle. The result has been a series of intercontinental basaltic eruptions.[1]

The Caja is not the only volcanic feature in this part of New Mexico. Approximately 20 miles (32 km) to its northwest is the Valles Caldera, a spectacular caldera which lies at the heart of the Jemez Mountains. This mountain range has been created by a series of eruptions since the Miocene. The ages of the first eruptions are difficult to determine, since the older rocks have been almost entirely buried by the material from younger eruptions. The oldest exposed volcanic rocks in the vicinity are approximately 16 million years old. The Jemez area experienced an intense pulse of basalt volcanism between 9 and 11 million years ago. The lavas from this cycle had little silica, and originated in the mantle. Additional pulses of volcanism occurred between 7-10 million years ago, between 6-7 million years ago, between 3-6 million years ago, and between 2-3 million years ago. The last of these pulses is believed to have created the Cerros del Rio volcanic field, which covers the entire Caja del Rio Plateau.

Several of the later eruptions involved not only basalts, but lavas made of rhyolite or dacite. Such lavas contain greater amounts of silica, and are more viscous than basalt. These eruptions created most of the highest peaks in the Jemez Mountains, including Chicoma Mountain(11,561 feet), and Polvadera Peak and Pajarito Mountain. Weathering of the igneous rocks resulted in alluvial fans, which spread eastward into the Rio Grande Rift. By 2 million years ago, the sediments had displaced the Rio Grande eastward from an earlier location near Los Alamos to its current location in White Rock Canyon. Two more eruptive cycles took place approximately 1.6 and 1.25 million years ago. The first eruption created the Toledo Caldera, but this feature was largely obliterated by the later Valles eruption. Each eruption involved pyroclastic flows and produced some of the welded tuff now found west of the Rio Grande. There have been numerous eruptions of sticky lavas in the last 1.25 million years ago, but all have been within the Valles Caldera. The most recent eruptions took place about 40-50,000 years ago, and formed the El Cajete Crater. This crater lies at the foot of Redondo Peak, a resurgent dome that rises to 11,254 feet within the Valles Caldera. Lying between White Rock Canyon and the rim of the Valles Caldera is the Pajarito Plateau, the many canyons of which have been cut by relatively recent erosion.

Soils in the Caja del Rio are derived from Tertiary volcanic basalt flows and cinder cone eruptions. Most are best characterized as stony or cindery loam, with shallow horizons. Soil surveys of the Caja generally describe the soils as unsatisfactory, with a reduced potential for hydrologic and nutrient function.

Sensitive bird species known to be present at the Caja include bald eagles, peregrine falcons, and Gray Vireos. 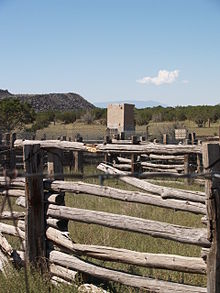 Livestock corrals at the Headquarters trailhead

Human Use and Management

Prehistoric Puebloans built dozens of village sites across the Caja del Rio and Pajarito plateaus. In contrast to its western neighbor, however, the canyon walls of the Caja are frequently made of basalt, rather than welded tuff. The latter material is much easier to excavate, and as a result, the Pajarito contains many more cliff houses. Both areas, however, contain countless petroglyphs. Most of them have been pecked into the ubiquitous basalt.

Europeans founded Santa Fe in 1610. It is likely that use of the Caja del Rio for the grazing of domesticated livestock began shortly thereafter. From the beginning of colonization until the 19th century, subsistence users treated the plateau as common property, and used it for summer grazing and timber harvesting. During the mid-19th century, commercial livestock ranching increased throughout New Mexico. By the 1890s, grazing levels throughout the Territory were as high as 9 million animal units. This overuse, combined with severe droughts in 1891 and 1892, led to the loss of top soils and major vegetative changes. Among the vegetative changes were the replacement of more palatable forbs and grasses by woody shrubs and trees.

At the beginning of the 20th century, the Forest Service began to address the problem of degraded rangelands. The new solutions included the reduction of grazing permits and the institution of range improvement programs. In 1935, the government purchased portions of the Caja del Rio Grant and the Majada Grant under the "Land Program" of the Federal Emergency Relief Administration. That acreage forms what is today the Caja del Rio Unit of the Santa Fe National Forest. Range surveys, maps, and a range management plan were completed by 1939. In the same year, the Soil Conservation Service assumed administration of the federal lands pursuant to a cooperative agreement among the Indian Services, Resettlement Administration, and the SCS. Responsibility for management was passed to the Forest Service in 1953. The Caja is now managed as a geographically distinct unit of the Espanola District of the Santa Fe National Forest. This unit consists of approximately 67,197 acres in 2010. The Taos Field Office of the Bureau of Land Management manages additional acreage just outside the forest unit.

The Caja del Rio Allotment is now managed as a community grazing allotment. Beginning in 1941, most of the existing allotment improvement were repaired or reconstructed. From 1954 to 1972, the average actual use was 711 permitted cattle. In 2010, the Forest Service allows a maximum of 8,305 animal unit months. That capacity is divided among twelve permittees who graze 492 cow-calf pairs and 28 bulls on ten pastures, in a yearlong season. The allotment was restocked after 2002 due to drought, and has been below maximum rates since then.

The allotment contains 18 earth tanks, 7 wells, 31 miles of pipelines, 14 drinking troughs, 10 storage tanks, and 77 miles of fencing. In 2006, the water supply was substantially improved by the completion of the Caja del Rio Pipeline.

From 2004, the Caja has been the focus of a grass roots campaign to develop recreational trail uses. The purpose of this campaign is to augment use of the Caja, rather than replacing grazing. The trail system is used primarily by mountain bike and horse riders.[2]

The United States Forest Service has designated Caja del Rio a Wild Horse Territory,[3] and manages a herd of mustangs there. A separate band of feral horses in the vicinity is not managed; its members are thought to be domestic horses recently turned loose to fend for themselves.

Caja del Rio Canyon (known locally as Diablo Canyon),[4] is a popular local rock climbing area on the northern section of Canada Ancha, near its confluence with the Rio Grande. This area can be accessed by Camino La Tierra and Old Buckman Road. Although the area is not marked, it has an undeveloped but very large parking area at its east end. The canyon walls include impressive trap rocks. The flat, sand bottom of the canyon is subject to spectacular flash floods during the summer monsoon season. The hike from Diablo Canyon to the Rio Grande is both scenic and easy White Rock Canyon. The wash is also popular with horse riders.[5] After passing Diablo Canyon, Old Buckman Road continues to the site of Buckman, a former logging town and depot of the narrow gauge Chili Line.[6] The Rio Grande can be forded in some seasons at Buckman. In fact, this crossing was a major transportation route between Santa Fe and the Pajarito Plateau.

The Caja has around 100 miles of mapped trails,.[7] Some of the more notable trails include

Frijoles Canyon Overlook - 2.6 miles (one way) of hiking trail and two track road running west from Montoso Peak to edge of White Rock Canyon, with descent into canyon across from Frijoles Canyon in Bandelier National Monument.

Soda Springs Trail - 3.1 miles (one way) of hiking trail running southwest from Buckman, and climbing up to Sagebrush Flats.

The proposed Rio Grande Trail, if it extends north of Bernalillo, may pass along the base of Caja del Rio.