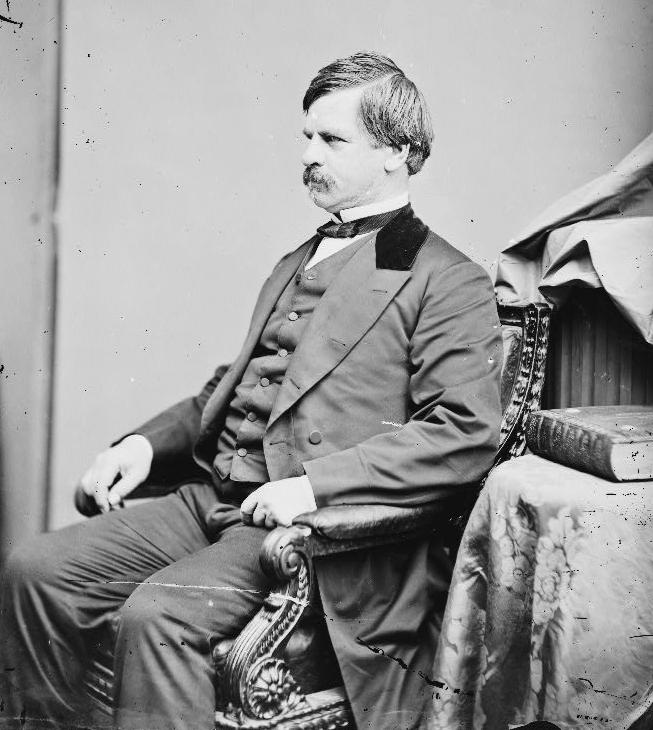 Nathaniel Prentice (or Prentiss) [Some sources have incorrectly spelled the middle name of Nathaniel as "Prentiss." All military historians consulted (Eicher, Foote, Warner) spell it "Prentiss", which implies that the U.S. Army personnel records used that form. Such a spelling does not appear in other important documents, on his tombstone, or in many letters to him from relatives. There is only one document in the voluminous Banks manuscript collections in which Nathaniel himself spelled his middle name. This was a partially completed fraternity application now at the American Antiquarian Society. He then spelled the name "Prentice". The general declined to answer requests for biographical sketches, and compilers relying on earlier, faulty sketches apparently repeated this erroneous "Prentiss" spelling.] Banks (, ndash , ) was an American and , served as , Speaker of the U.S. House of Representatives and as a Union general during the .

Banks was born at , the first child of Nathaniel P. Banks, Sr., and Rebecca Greenwood Banks. He received only a common school education and at an early age began work as a bobbin boy in a local cotton factory; throughout his life he was known by the humorous nickname, Bobbin Boy Banks. Subsequently, he apprenticed as a mechanic, briefly edited several weekly newspapers, studied law and was admitted to the bar at age 23, his energy and his ability as a public speaker soon winning him distinction. His booming, distinctive voice and oracular style of delivery made him a commanding presence before an audience. On , at , he married Mary Theodosia Palmer, an ex-factory employee, after a lengthy courtship.

Banks served as a Democrat in the from 1849 to 1853, and was speaker in 1851 and 1852; he was president of the state Constitutional Convention of 1853, and in the same year was elected to the as a coalition candidate of Democrats and Free-Soilers. In 1854, he was reelected as a .

At the opening of the Thirty-Fourth Congress, men from several parties opposed to slavery's spread gradually united in supporting Banks for speaker, and after the longest and one of the most bitter speakership contests ever, lasting, from to , he was chosen on the 133rd ballot. This has been called the first national victory of the Republican party. He gave antislavery men important posts in Congress for the first time, and cooperated with investigations of both the Kansas conflict and the caning of Senator . Yet, he also left a legacy of fairness in his appointments and decisions. He played a key role in 1856 in bringing forward as a moderate Republican presidential nominee. As a part of this process, Banks declined, as pre-arranged, the presidential nomination of those Know-Nothings, opposed to the spread of slavery, in favor of Republican Frémont. For the next few years, Banks was supported by a coalition of Know-Nothings and Republicans in Massachusetts. His interest in the Know-Nothing legislative agenda was minimal, supporting only some tougher residency requirements for voting.

Re-elected in 1856 as a Republican, he resigned his seat in December 1857, and was from 1858 to 1860, during a period of government contraction forced by the depression of those years. He made a serious attempt to gain the Republican presidential nomination in 1860, but discord within his party in Massachusetts, a residence in a "safe" Republican state, and his Know-Nothing past doomed his chances. He then was briefly resident director in , of the , hired primarily to promote sale of the railroad's extensive lands.

As the Civil War became imminent, President considered Banks for a cabinet post, and eventually chose him as one of the first major generals of volunteers, appointing him on . Perceptions that the Massachusetts militia was well organized and armed at the beginning of the Civil War likely played a role in the appointment decision, as Banks had also been considered for . He was initially resented by many of the generals who had graduated from the , but Banks brought political benefits to the administration, including the ability to attract recruits and money for the Federal cause.

Banks first commanded at , suppressing support for the Confederacy in a slave-holding state that was at risk of seceding, then was sent to command on the upper Potomac when Brig. Gen. failed to move aggressively in that area.

When Maj. Gen. entered upon his in spring 1862, the important duty of keeping the Confederate forces of in the from reinforcing the defenses of Richmond fell to the two divisions commanded by Banks. When Banks's men reached the southern Valley at the end of a difficult supply line, the president recalled them to , at the northern end. Jackson then marched rapidly down the adjacent Luray Valley, driving Banks's retreating men from , on , and north to the . Jackson's campaign of maneuver and lightning strikes against superior forces in the Valley&mdash;under Banks and other Union generals&mdash;humiliated the North and made him one of the most famous generals in American history.

On , Banks again encountered Jackson at Cedar Mountain, in Culpeper County, and attacked him to gain early advantage, but a Confederate counterattack led by repulsed Banks's corps and won the day. The arrival at the end of the day of Union reinforcements under Maj. Gen. John Pope, as well as the rest of Jackson's men, resulted in a two-day stand-off there. The Northern newspapers provided flattering versions of Banks's performance while Southern newspapers called the battle a Southern victory.

The Army of the Gulf

Banks next received command of the defense forces at Washington. In November 1862 he was asked to organize a force of 30,000 new recruits, drawn from and . As a former governor of Massachusetts, he was politically connected to the governors of these states, and the recruitment effort was successful. In December he sailed from with a this large force of raw recruits to replace Maj. Gen. Benjamin Butler at , as commander of the Department of the Gulf. Under orders to ascend the to join forces with , who was then trying to capture Vicksburg, Banks first pushed a Confederate force up the Teche Bayou and marched to , hauling off slaves, cotton, and cattle from a rich agricultural area.

When the Confederates reduced their garrison at , on the Mississippi, he invested that place in May 1863. Two attempts to carry the works by storm during the , as at Vicksburg, were dismal failures. Port Hudson was the first time African American soldiers were used in a major Civil War battle, as permitted by Banks. Low on food and ammunition, the garrison surrendered on , , after receiving word that Vicksburg had fallen. The entire Mississippi River was then under Union control.

In the autumn of 1863, Banks organized two seaborne expeditions to , chiefly for the purpose of preventing the French in from aiding the Confederates or occupying Texas, and he eventually secured possession of the region near the mouth of the and the Texas outer islands.

The , March&ndash;May 1864, was considered a strategic distraction by his superior, Ulysses S. Grant, who wanted Banks to drive east to capture , as part of a coordinated series of offensives in the spring of 1864. Banks himself disagreed with the plan, hoping instead to mount an expedition to capture Galveston, but the movement was ordered by Chief of Staff . Halleck's plan was approved by the Lincoln administration and General Banks went ahead with it under official protest.

Banks' Army was routed at the by General Richard Taylor (son of former President ) and retreated twenty miles to make a stand the next day at the . They continued the retreat to Alexandria where they rejoined with part of the Federal Inland Fleet. That naval force under had joined the Red River Campaign with intent to take on cotton as lucrative prizes of war, and Banks had allowed rich speculators to come along for the gathering of cotton. Added to the mix was a cooperating force unable to arrive overland from Arkansas, two attached corps belonging to General acting semi-independently, and dangerously low water levels on the river that supplied the army.

Banks was dependent on Porter's fleet to continue his retreat, but Porter's fleet was trapped above the falls at Alexandria by the low water. Banks approved a plan proposed by Joseph Bailey to build wing dams as a means to raise what little water was left in the channel. In ten days, 10,000 troops under fire built two dams, and managed to rescue Porter's fleet and Banks' army.

After the campaign, just before General Sherman began his operations against Atlanta, Sherman called the Red River Campaign "One damn blunder from from beginning to end."

Banks was removed from command after the Red River Campaign.

The Confederates held the Red River for the remainder of the war. They finally surrendered June 1865, two months after sued for peace at in .

Removed from his field command, President Lincoln placed Banks on leave in Washington, where he lobbied for months for the president's reconstruction plans for . Banks had earlier engineered the election victory of a moderate loyalist civilian government in Louisiana, inaugurated by elaborate celebrations he organized and funded. The secret presidential investigating commission headed by conservative Democrats and James T. Brady in early 1865 devoted considerable effort to trying to connect Banks with vice and irregular trading permits in the New Orleans area. The somewhat one-sided final commission report, which did not specifically accuse him of wrongdoing, was never released. But he had definitely granted special favors without apparent compensation to men later connected to the Crédit Mobilier scandal and to a few others of questionable reputation.

In August 1865, Banks was mustered out of the service by President , and from 1865 to 1873, he was again a representative in Congress, serving as chairman of the Foreign Affairs Committee and sometimes as chair of the Republican caucus. He played a key role in the final passage of the legislation and was one of the strongest early advocates of . He wanted the United States to acquire Canada and the Caribbean islands to reduce European influence in the region. He also served on the committee investigating the Crédit Mobilier scandal.

Unhappiness with the course of the administration of President Ulysses Grant led, in 1872, to his joining the Liberal-Republican revolt in support of . While Banks was campaigning across the North for Greeley, an opponent successfully gathered enough support to defeat him in his Massachusetts district as the Liberal-Republican and Democratic candidate. He thought his involvement with a start-up Kentucky railroad and other railroads would substitute for the political loss. But the doomed the railroad, and Banks went on the lecture circuit and served in the Massachusetts Senate.

In 1874, he was elected to Congress again as an independent and served the following two terms, again as a Republican (1875&ndash;1879). He was a member of the committee investigating the irregular 1876 elections in . Defeated for yet another term, the president appointed him United States marshal for Massachusetts, a post he held from 1879 until 1888, when for the tenth time, he was elected to Congress as a Republican. This final term saw significant mental deterioration, and he was not renominated. He died at Waltham, and is buried there in Grove Hill Cemetery.