:"See for other people with this name" 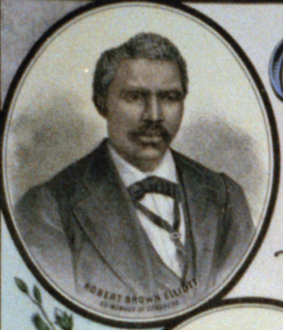 Born in Liverpool, England, he graduated from in 1859, and served in the English . He moved to in 1867 and established a law practice. Elliott helped organize the local Republican Party and served at the state constitutional convention. In 1868 he was elected to the . The next year he was appointed assistant ; He was the first African American commanding general of the South Carolina National Guard. As part of his job, he helped form a state militia to fight the .

Elliott was elected as a Republican to the Forty-second and Forty-third United States Congress. He "delivered a celebrated speech" [http://www.digitalhistory.uh.edu/reconstruction/section4/section4_elliott.html] in favor of the . He resigned on , , to fight political corruption in South Carolina. He served once more as a member of the state house of representatives, where he was elected as Speaker of the House.

In 1876, he was elected . However, Reconstruction ended that year and he was forced out of office. He set up a private law practice in .