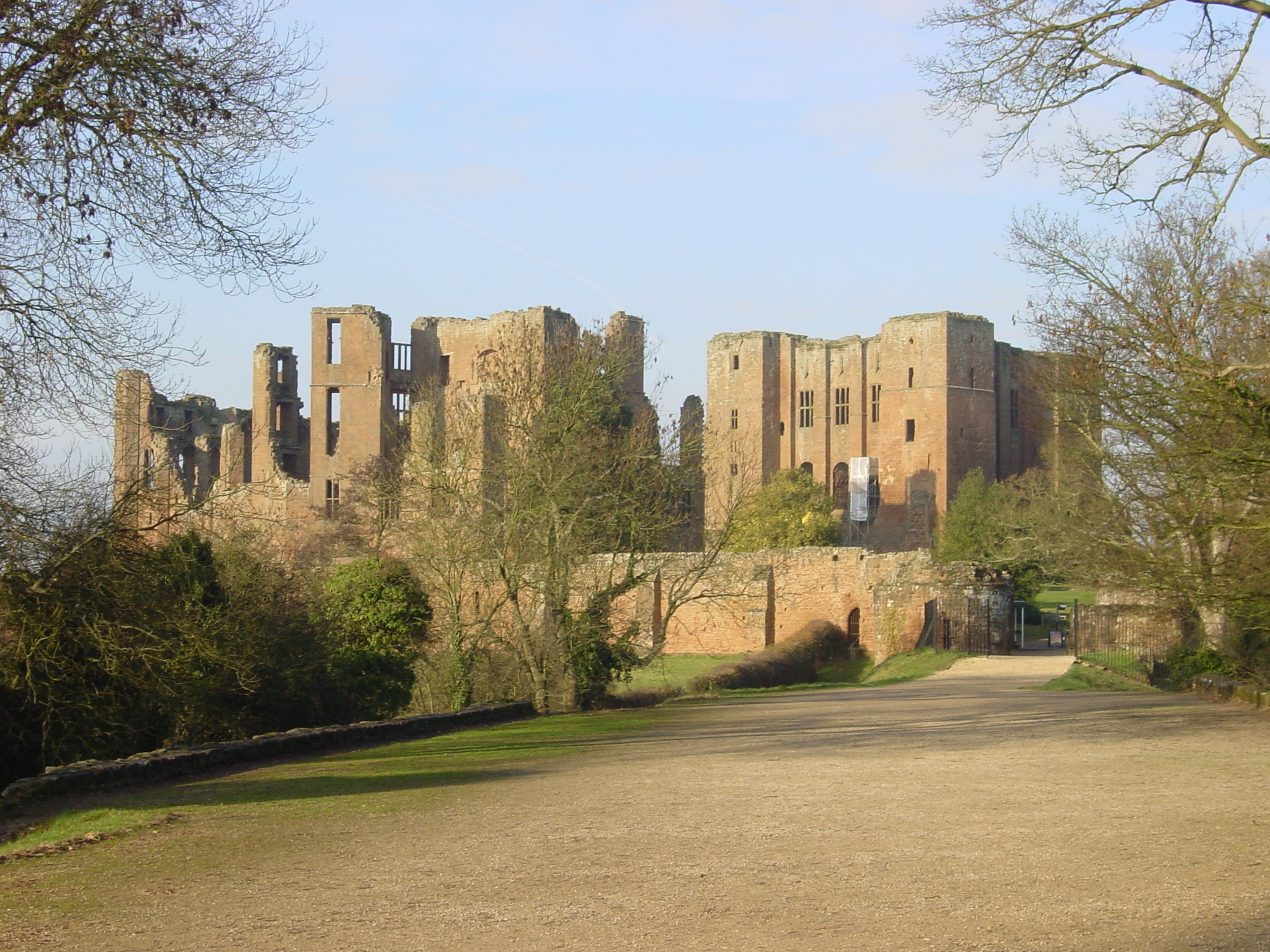 Kenilworth Castle is a castle located in , , (gbmapping|SP2794172163). Historically the Castle was contained within the .

A fortification has existed on the site from Saxon times, but the current ruin is of Norman origin; a great square stone tower built by , Treasurer and Chief Justice of England to Henry I, in about 1125. Henry II took control of the castle during the , giving the Clintons another castle in by way of compensation.

Work then began to improve the defensive qualities of the castle, continuing during the reign of Henry III and transforming the castle into one of the strongest in the . The strategic advantages of water defences had long been known, and at Kenilworth a great lake was created to defend three sides of the castle. Covering over 100 acres (0.4 km²) it was an expensive endeavour, but the value in keeping siege engines at a distance and as a barrier to assault or mining was immense.

However, after all the work to improve the castle, Henry III granted it in 1244 to Simon de Montfort, Earl of Leicester. Simon de Montfort became a leader in the (1263-1267) against Henry III, using Kenilworth as the centre of his operations. Prince Edward, Henry's heir, was once briefly imprisoned at Kenilworth before escaping. De Montfort was killed in battle near on facing Edward. In 1266, the rebels under the leadership of Henry de Hastings, used the castle as a refuge when Lord Edward surrounded Kenilworth. The siege of Kenilworth Castle in 1266 is the longest in English history at almost a year. The extensive water defences proved their worth, despite Edward targeting the weaker north wall, defended by only a double moat, employing huge s and even attempting a night attack by barge. The siege was ended on easy terms for the defenders with the . The experience gained in water defenses at Kenilworth was put to good effect at later castles built in Wales, notably Caerphilly.

Henry III bestowed the castle upon his youngest son . The castle was inherited by Edmund's grandson , and then passed to the Duke's son-in-law .

From 1364 John of Gaunt began the castle's conversion from a pure fortress into something more liveable, work that continued with his grandson, Henry V. The castle remained in royal hands until it was given to in 1553. Following his execution Elizabeth I gave it to her favourite in 1563. Dudley further transformed the castle by making the north entrance the main entrance to suit the tastes of Elizabeth, adding the Leicester building, a large apartment and a residential block overlooking the lake. Elizabeth visited Dudley at Kenilworth Castle several times, the last of which was in 1575. Dudley entertained the Queen with pageants, bear beating and lavish banquets that cost some £1000 per day, presenting diversions and pageants surpassing anything ever before seen in England. [ [http://www.elizabethan-era.org.uk/elizabethan-masques.htm Information about Elizabethan masques] ] [ [http://www.cris.com/~Oakapple/gasdisc/sullchoral.htm#kenilworth Information about Elizabeth's visit to Kenilworth] ] Elizabeth stayed at Kenilworth for a month, and the entertainments are said to have almost bankrupted Dudley. Sir wrote an 1821 novel describing the royal visit, and Sir wrote a choral work in 1864 about it. [ [http://www.independent.co.uk/news/uk/this-britain/the-great-kenilworth-boozeup-how-to-party-like-its-1575-765477.html "The great Kenilworth booze-up: how to party like it's 1575"] Andy McSmith "" . Accessed ] Elizabeth is said, according to local legend, to have tasted the first potato brought into the country at Kenilworth Castle. Unfortunately she ate it raw, disliked it and threw it out the window where it grew in an area now known as Little Virginia.

The castle returned to the Crown on Dudley's death. In the , the castle was stormed and looted by Parliamentarian troops. In common with many English castles, Kenilworth was slighted (rendered indefensible) after the Civil War. One wall of the keep was blown up, and battlements and the great water defences were destroyed, in 1656.

In 1660 Charles II gave the castle to Sir Edward Hyde, whom he created Baron Hyde of Hindon and Earl of Clarendon. The castle remained the property of the Clarendons until 1937 before passing into the possession of . The family presented the castle to Kenilworth in 1958 and has looked after it since 1984.

In 2005 English Heritage announced that after archaeological investigations revealed more details of the original garden, it will be restoring the garden more closely to its Elizabethan form. A fountain and aviary will be reconstructed. The project is scheduled for completion in 2008 [http://www.english-heritage.org.uk/server/show/ConWebDoc.12092]

The s of Kenilworth Castle include:

Christopher Candy, [http://www.cusd.claremont.edu/~ccandy/his/kenil.html "For the Sake of a Keep: The Siege of Kenilworth, 1267"]