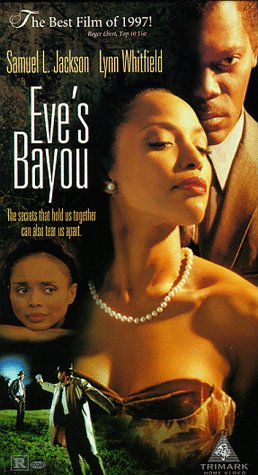 "Eve's Bayou" is a 1997 drama film written and directed by , who made her directorial debut with this feature. starred in the film (and served as a producer as well) alongside , , , and .

Eve (Smollett) is the youngest daughter of one of 's most sophisticated and prosperous families. Her father Louis (Jackson), is the town's highly respected doctor, a man known for his ability to "fix" things &mdash; everything except his own family problems and philandering lifestyle. Her mother Roz (Whitfield) is a stunning southern beauty with an affinity for the traditions of Creole heritage. But Eve is most like her Aunt Mozelle (Morgan) &mdash; impulsive, intuitive, a touch supernatural and possessing the need to know the truth about everything. Over one explosive summer, this young girl uncovers some of her family's most frightening hidden truths, and then tries to bind them together against the tide of tragedy. Insight uncovers some frightening truths about her family, and must bring them together to avert tragedy.

The film received overwhelmingly positive reviews, with esteemed film critic naming it the best film of 1997. [http://rogerebert.suntimes.com/apps/pbcs.dll/article?AID=/19971107/REVIEWS/711070303/1023, Eve's Bayou, rogerebert.com] 's Paul Tatara, Empire, , The , , , TIME, Variety, and also loudly praised the film and it's performances. Though not nominated for any Academy Awards, the film did receive many accolades. 's performance would be her most honored film role, with four nominations and two wins. [http://www.imdb.com/name/nm0005247/awards, Debbi Morgan - Awards] The film is also noted for 's performance; up to this point, she had worked primarily as a TV actress, with "Jack" previously being her only film.