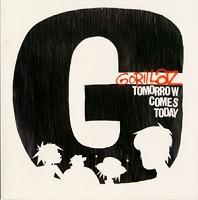 "Tomorrow Comes Today" is a song from Gorillaz's , "Gorillaz", originally appearing as the opening track of their debut EP of the same name. The song itself was also the fourth and final single from that album, released on (see ). It peaked at #33 in the .

The video is the same as the one made for the EP. The video shows Gorillaz in various backgrounds with 2-D singing the vocals.