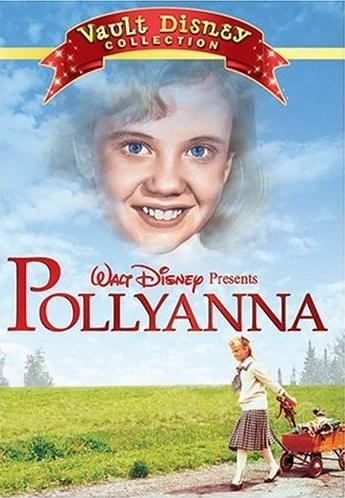 "Pollyanna" (1960) is a starring child actress , , and Richard Egan in a story about a cheerful orphan changing the outlook of a small town. Based upon the novel "" (1913) by , the film was written and directed by . The film marks Mills' first of six films for Disney and won the actress a special . "Pollyanna" has been broadcast on television and released to VHS and DVD.

Pollyanna () is the orphaned daughter of missionaries who arrives in the small town of Harrington to live with her rich aunt, Polly Harrington (). Pollyanna is a cheerful youngster who focuses on the goodness of life and, in doing so, makes a wide variety of friends in the community including the hypochondriac Mrs. Snow () and the acidic recluse Mr. Pendergast ().

Aunt Polly's wealth controls the town, and, when Harrington citizens want a derelict orphanage razed and rebuilt, Aunt Polly opposes the idea. The townspeople defy her by planning a carnival to raise funds for a new structure. Aunt Polly is furious with their audacity and forbids Pollyanna to participate. On the evening of the carnival however, Pollyanna is coaxed out of the house by playmate Jimmy Bean (), who reminds Pollyanna she is leading "America, the Beautiful" at the highpoint of the event. With misgivings, Pollyanna slips away and has a wonderful time at the carnival.

On returning home, she avoids her aunt's presence by climbing a tree to her attic bedroom. She falls and is severely injured, losing the use of her legs. Pollyanna's spirits sink with the calamity, jeopardzing her chances of recovery. When the townspeople learn of Pollyanna's accident, they gather "en masse" in Aunt Polly's house with outpourings of love. Pollyanna's spirits gradually return to their usual hopefulness and love of life. She departs Harrington with her aunt for an operation in Baltimore that, it is hoped will correct her disability. The film ends at this point. It is never made clear whether or not she recovers the use of her legs.

Secondary roles are filled by a host of veteran film and television performers. Servants in Aunt Polly's home include as cook Tillie Lagerlof and as the sour upstairs maid Angelica. plays Reverend Ford's wife, and plays the mortician Mr. Murg. Townspeople include as Mayor Karl Warren, and as Ben and Amelia Tarbell. plays Mr. Neely and portrays Mr. Thomas. Director David Swift plays a fireman in an early scene.

Although the original book had a sequel, such was not the case for the film.

"Pollyanna" was filmed in Santa Rosa, California with the Mableton Mansion at 1015 McDonald Avenue in Santa Rosa serving as the exterior and grounds of Aunt Polly's house. Other California locations include Napa Valley and Petaluma. Interiors were filmed at the Walt Disney Studios in Burbank, California.

of wrote in the "" of October 25, 1987, "An attempt was made to resuscitate "Pollyanna" in 1960 when Walt Disney released a movie based on the book. "Time", "" and other major reviewers agreed that such an enterprise promised to be a disaster - a tearjerker of a story presented by the master of schmaltz; what surprised the critics (their opinions were unanimous) was that it was his best live-action film ever. But few had reckoned the curse of the book's by then saccharine reputation. When the movie failed to bring in half of the $6 million that was expected, Disney opined: "I think the picture would have done better with a different title. Girls and women went to it, but men tended to stay away because it sounded sweet and sticky."" [ [http://query.nytimes.com/gst/fullpage.html?res=9B0DE6DD123DF936A15753C1A961948260&sec=&spon= "New York Times: Pollyanna, Ex-Bubblehead"] ]

Hayley Mills won a special 1961 juvenile for her performance, and also received a nomination for Best Actress.

The film generated a trickle of juvenile merchandise including a Dell comic book, a paper-doll collection, an LP recording, an illustrated Little Golden Book, and a 30" Uneeda character doll in a red and white gingham dress, pantaloons, and boots.

Comparison with the book

*The book's town of Beldingsville, Vermont becomes the film's town of Harrington.
*The book's Mr. Pendleton and Thomas Chilton become Mr. Pendergast and Edmund Chilton in the film. Nancy's film sweetheart George Dodds doesn't exist in the book.
*In the book, Pollyanna has a tree outside her attic window but uses it only once - on the day she arrives in town. Shortly thereafter, Aunt Polly has her niece moved to a bedroom close to her own when Pollyanna negligently allows flies to enter the house through her unscreened attic window. In the film however, Pollyanna remains an inmate of the attic bedroom until the day following her tragic accident.
*The film ascribes Pollyanna's injuries to a fall from her attic window; the book ascribes her injuries to an automobile accident.
*The book contains some satirical and pointed criticism of the charity-minded Ladies Aid Societies of the early 20th century. The criticism never enters the film. However, Aunt Polly's film friend Amelia Tarbell sports something of the snobbishness associated with the "Ladies Aiders" of the book.
* Unlike the film Nancy, the book Nancy is a relatively unlettered country girl given to grammatical errors, slang, and repetitive phrasing such as, "It 'tis, it 'tis!" The book Nancy isn't engaged in a romantic affair Aunt Polly wishes to suppress (as in the film) nor does she have a sweetheart.