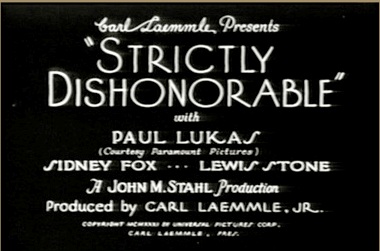 As a film made before the advent of the , the film-makers were able to preserve the cheerfully uninhibited sexual innuendo of the Sturges play in their movie version, which he is said to have unofficially endorsed.

Snubbish, quick-tempered Henry Greene () and his fiancee Isabelle Perry () stop into a New York speakeasy owned by Tomasso Antiovi (William Ricciardi) for a drink. There, they meet retired Judge Dempsey ((), an amiable man who befriends the Southern belle, much to Henry's dismay. Famous opera singer "Tino Caraffa", a charming but notorious playboy whose real name is "Gus" Di Ruvo, () is there as well, and while Henry is gone to move his illegally parked car, Gus and Isabelle, an opera fan, get acquainted. When Henry returns he's incensed to learn that the two of them have been dancing together. He wants Isabelle to leave with him, but she refuses and breaks off their engagement, returning his ring. Henry tries to get the police to help him force Isabelle to leave, by telling them that she has been "kidnapped by villains", but Judge Dempsey sets them straight, getting Henry arrested and taken away.

Gus offers to put Isabelle up for the night, assuring her that his intentions are "strictly dishonorable". The Judge warns Isabelle about Gus, but she is adamant about staying, since she has fallen in love. So, too, has Gus: overwhelmed by Isabelle's sweetness and innocence, he spends the night in Judge Dempsey's apartment.

The next morning, Henry returns and tries to get Isabelle to come back to him. Despite appearances, she assures him that she has not lost her virtue and wants to know if he is still "pure", but he insists that it is "entirely different" for men. She reluctantly agress to remain engaged to Henry, and he leaves to wait for her outside. Gus arrives and proposes marriage to Isabelle, but she does not believe that he loves her, and she leaves. When Gus and the judge go to get a drink, they find Isabelle there, crying. She confesses that she does love Gus, and the judge goes to tell Henry not to wait. [TCM [http://www.tcm.com/tcmdb/title.jsp?stid=14872&category=Full%20Synopsis Full synopsis] ] [Steele, David [http://www.allmovie.com/cg/avg.dll?p=avg&sql=1:112071 Plot summary (IMDB)] ]

Cast notes:
*"Dempsey" was the maiden name of Preston Sturges' mother.
*William Ricciardi is the only actor who also appeared in the Broadway production of "Strictly Dishonorable".
*Natalie Moorhead played the role of "Lilli", one of Gus's lovers, but her scenes were deleted from the released film.
*Sidney Toler went on to achieve fame playing .

Universal paid Preston Sturges the record sum of $125,000 for the rights to "Strictly Dishonorable", equal only to RKO's purchase of the rights to "".

Sturges' play was filmed again in fy|1951, and released by under the same title, "Strictly Dishonorable". [imdb title|0044082|Strictly Dishonorable (1951)] It was written, produced and directed by and and starred and . Much of the sexual innuendo of the original was scrubbed from the remake, which was also musicalized.