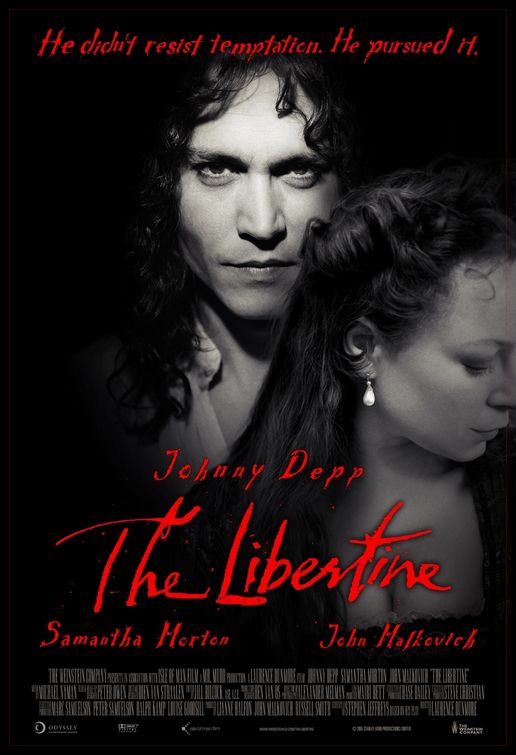 "The Libertine" is a movie that was widely released in the on , and on in the . (Having first been shown on at the , and then opening in New York and Los Angeles on , for a one-week award-qualifying run.) [http://www.comingsoon.net/films.php?id=9350]

It stars , , , and . It is directed by (his debut film) from ' adaptation of his play of the same name. Johnny Depp plays the main character, John Wilmot, 2nd Earl of Rochester, a notorious rake and in the court of King Charles II of . Samantha Morton plays , an actress who becomes brilliant when coached by Rochester, who is her lover. John Malkovich plays the King who cares about John dearly, but cannot have him ruin his reputation as King. A prevalent aspect of the film is the use of sex and sexually related activities as a form of common escapism. The film was rated R by the US . In the UK, it has been rated 18.

Lord Rochester's suspected ity is only hinted at in most of the film (besides the prologue, in which he makes a fairly blunt warning to the audience that his sexual appetite extends further than heterosexual limitations). Tabloids had Johnny Depp (Rochester) sharing a steamy kiss with (Downs), but their relationship has been reduced to two brief, ambiguous scenes.

"Tagline: He didn't resist temptation. He pursued it."

In need of Rochester’s writing skill, King Charles II (Malkovich) summons the Earl (Depp) back to , retracting his earlier banishment. As in life, Rochester is shown carrying on with his friends, the Merry Gang, including (Hollander) and (Vegas). On his way back to the court, Rochester comes across a thief, Alcock (Coyle), and hires him as his on the spot. For one of his first social engagements in London, he takes in a play featuring (Morton), who is booed off the stage and fired by the company for her poor performance. Rochester is taken with Barry and bets Etherege that can make her a renowned actress in a year’s time. As when Rochester met Barry in reality, he immediately begins to tutor her and they fall in love.

Meanwhile, Charles asks Rochester to write a great work about him, to bolster his legacy as king. Barry delivers a brilliant performance at her next play and Etherege pays off his debt to Rochester. The king pays Barry to spy on Rochester to keep track of his progress. Billy Downs (Friend) joins the Merry Gang, and becomes a close friend of Rochester’s. Charles, in need of money from France, asks Rochester to write an extravagant play in honor of the French Ambassador’s visit, hoping it will impress the Ambassador to lend his support. Instead, Rochester writes "A Satyr on Charles II", which involves nude actors, phallic imagery, the distribution of ornate s, and a scathingly veridical criticism of the King played by Rochester himself. Outraged, Charles interrupts the play and Rochester flees. Rochester continues to slide into debauchery, creating a skirmish outside a house of prostitution that leads to Downs’s death.

For six months Rochester escapes the scrutiny of the King while suffering the effects of . Hiding in the English countryside under the pseudonym of Doctor Bendo with the help of Alcock and Jane, his and confidant. Rochester conceals his facial beneath a mask and peddles medical services. Eventually he is found, but instead of any capital punishment, the King decides a worse fate would be to ignore him, in his words, “condemning you to be you for the rest of your days”. He returns to his wife (Pike) and his home, where his mother convinces him to renounce his and accept .

In the meantime, Charles’s unpopular support of has led to his political beating in Parliament. Unable to conceive any heirs with his wife it was feared that his Catholic brother, would become king. So Parliament introduced the to deny James the throne which seemed sure to pass by 15 votes. Rochester makes a dramatic entrance into Parliament, wearing a silver nosepiece, because he is nose-less, heavy pancake makeup to conceal the ravages of syphilis, and hobbling on two canes, and eloquently denounces the Bill, to his heroic shame. As Rochester walks off, the subsequent vote kills the bill by over 40 votes. He goes to see Barry who reveals they had a daughter together, yet she rejects him. He returns to his home to his deathbed. Recalling fond memories, he dies with his wife, mother, and Alcock by his side. 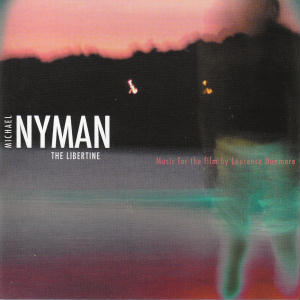 "The Libertine" is the third release on 's own label, , and the first to receive distribution in the , by . It is his 50th album release overall. When began distributing MN Records in the United States in 2008, it was included and began appearing in large quantitites in stores. This is Nyman's last score for a major motion picture to date, and his last soundtrack release.

The score includes the song "If" (as "Rochester's farewell," with partially changed lyrics, removal of the quotes from "Time Lapse" from "", and the addition of a setting of the "") performed by , who originally performed it in the film, "The Diary of Anne Frank" (1995). It also includes an abridgement by Jeffreys of one of Wilmot's most famous poems, "Signior ", also sung by Ms. Summers. A recurring theme on the album which first appears in "Upon drinking in a bowl" for solo viola, became the basis of the "Interlude in C" for ensemble. "The maimed debauchee" is a fairly brief piece, but resembles the Interlude at its climax. The theme reappears in a longer version as "Against constancy."

Portions of the score appear in all-brass arrangments on the album, .

The film has grossed a total of $4.8 million in the and $10.8 million worldwide [http://www.boxofficemojo.com/movies/?id=libertine.htm]

* , who served as both actor and producer in the film, had appeared as the main character, Lord Rochester, in its first run on stage but had himself asked to take the role in the movie version.
* , , and also have starring roles together in the "Pirates of the Caribbean" film series.
* , , , and all later worked together on 2005's "Pride and Prejudice"
* Both and starred in the UK-sitcom "Coupling"
* Johnny Depp suggested that , his "Pirates of the Caribbean" character, had had his nose sliced off in a battle and had it poorly stitched back on, causing him to have a mortal fear of dust, pepper and anything else that might cause him to sneeze it off. The producers nixed the idea, but his character of Wilmot shares a similar ailment.