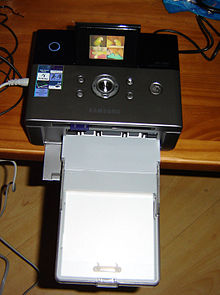 A dye-sublimation printer (or dye-sub printer) is a computer printer which employs a printing process that uses heat to transfer dye onto medium materials such as a plastic card, paper, or fabric. The sublimation name is applied because the dye transitions between the solid and gas states without going through a liquid stage. Many consumer and professional dye-sublimation printers are designed and used for producing photographic prints.

These are not to be confused with dye sublimation heat transfer imprinting printers, which use special inks to create transfers designed to be imprinted on polyester items.

Most dye-sublimation printers use CMYO (Cyan Magenta Yellow Overcoating) colors, which differs from the more recognized CMYK colors in that the black dye is eliminated in favour of a clear overcoating. This overcoating (which has numerous names depending on the manufacturer) is also stored on the ribbon and is effectively a thin laminate which protects the print from discoloration from UV light and the air, while also rendering the print water-resistant.

The most common process lays one color at a time, the dye being stored on a cellophane ribbon that has each color on a separate panel. Each colored panel is the size of the medium that is being printed on; for example, a 6" by 4" dye sub printer would have four 6" by 4" panels.

During the printing cycle, the printer rollers will move the medium and one of the colored panels together under a thermal printing head, which is usually the same width as the shorter dimension of the print medium. Tiny heating elements on the head change temperature rapidly, laying different amounts of dye depending on the amount of heat applied. After being heated into a gas, the dye diffuses onto the printing medium and solidifies.

After the printer finishes covering the medium in one color, it winds the ribbon on to the next color panel and partially ejects the medium from the printer to prepare for the next cycle. The entire process is repeated four times in total: the first three lay the colors onto the medium to form a complete image, while the last one lays the laminate over top. This layer protects the dye from resublimating when handled or exposed to warm conditions.

Traditionally, the advantage of dye-sublimation printing has been the fact that it is a continuous-tone technology, where each dot can be any color. In contrast, inkjet printers can vary the location and size of ink droplets, a process called dithering, but each drop of ink is limited to the colors of the inks installed. Consequently, a dye-sublimation printer produces true continuous tones appearing much like a chemical photograph. An inkjet print is composed of droplets of ink layered and scattered to simulate continuous tones, but under magnification the individual droplets can be seen. In the early days of inkjet printing, the large droplets and low resolution made inkjet prints significantly inferior to dye-sublimation, but today's inkjets produce extremely high quality prints using microscopic droplets and supplementary ink colors, producing superior color fidelity to dye-sublimation.

Dye sublimation offers some advantages over inkjet printing. For one, the prints are dry and ready to handle as soon as they exit the printer. Since the thermal head doesn't have to sweep back and forth over the print media, there are fewer moving parts that can break down. As the dye never enters a liquid phase, the whole printing cycle is extremely clean; there are no liquid inks to clean up. These factors make dye-sublimation generally a more reliable technology over inkjet printing.

Dye-sublimation printers have some drawbacks compared to inkjet printers. Each of the colored panels of the ribbons, and the thermal head itself, must match the size of the media that is being printed on. Furthermore, only specially coated paper can accept the sublimated ink. This means that dye-sublimation printers cannot match the flexibility of inkjet printers in printing on a wide range of media. Printheads can also get clogged.

Because the sublimated ink is a gas, it does diffuse a small amount before being absorbed by the paper. Consequently, prints are not razor-sharp. For photographs, this produces very natural prints, but for other uses (such as graphic design) this slight blurriness is a disadvantage.

The amount of wasted dye per page is also very high; most of the dye in the four panels may be wasted for a typical print. Once a panel has been used, even to just print a single dot, the remaining dye on that panel cannot be reused for another print without leaving a blank spot where the dye was used previously. Due to the single-roll design of most printers, four panels of colored dye must be used for every print, whether or not a panel is needed for the print. Printing in monochrome saves nothing, and the three unused color panels for that page cannot be recycled for a different single-color print. Inkjet printers can also suffer from 'dye wastage' as the ink cartridges are prone to drying up with low usage (without 'heavy use', the cartridge nozzles can become clogged with dried ink). Dye-sublimation media packs, (which contain both ribbon and paper), are rated for an exact number of prints which yields a fixed cost per print. This is in opposition to inkjet printers where inks are purchased by volume.

For environments that print confidential or secret documents, a dye-sublimation printer is a potential security risk that must be handled carefully. Due to the mechanism of printing, a perfect color-separated negative image of the printed page is created on the supply roll color panels, and the "waste roll" of dye panels can be unrolled to see everything that has been printed with the printer. For such environments the waste roll should be shredded or incinerated onsite rather than simply being discarded in the trash. Also for home users, the waste roll from a photo printer can be similarly recovered from the garbage and used to see everything that has been printed. Since the supply roll is plastic, the lifespan of a used roll can be years or decades long, permitting image recovery long after disposal.

Also, dye-sublimation papers and ribbons are sensitive to skin oils, which interfere with the dye's ability to sublimate from the ribbon to the paper. They must also be free of dust particles, which can lead to small colored blobs appearing on the prints. Most dye-sublimation printers have filters to reduce the likelihood of this happening, and a speck of dust can only affect one print as it becomes attached to the print during the printing process. Finally, dye-sublimation printers fall short when producing neutral and toned black-and-white prints with higher density levels and virtually no metamerism or bronzing.[citation needed] 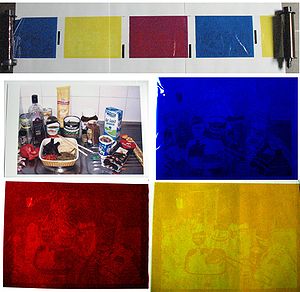 Used dye panels retain a viewable image of the printed document, and an example of wasted dye that cannot be reused.

Previously, the use of dye-sub printing was limited to industrial or high-end commercial printing. Dye-sub photo printing has been used in medical imaging, graphic arts proofing, security, and broadcast related applications.

Alps Electric produced the first quality dye-sub printers for home consumers in the $500–$1,000 price range, bringing dye-sublimation technology within the reach of a wider audience. Now there are many dye-sublimation printers on the market starting from as low as $100 marketed by corporations such as Canon, Sony, Sagem, HiTi Digital Inc.,DNP Fotolusio, Mitsubishi Electric and Kodak (among others), especially postcard-sized mobile photo printers.

The ability to produce instant photo prints inexpensively from a small printer has led to dye sublimation solutions supplanting traditional instant photos in some applications, such as with ID photography with a card printer.

Several corporations, including Fuji, ICI, Kodak, DNP, Mitsubishi, and Sony, market desktop size units as stand-alone printers and for print kiosk and photo booth applications. Some of these units are based on generic printers produced by manufacturers such as Shinko. ICI ImageData, Copal, Shinko and Fuji, amongst others, offer software development kits with their printers, suggesting that these companies hope to attract system integrators as a potential market. Some units from manufacturers such as HiTi Digital Inc. and Sony incorporate kiosk features such as display screens and card slots directly into the unit.

Desktop size stand-alone dye-sub photo printers are also being applied by social photographers in event photography. The units' instant print ability allows photographers to produce and sell lab quality prints immediately during the event they are attending, with a minimal amount of hardware.

Dye-sublimation can also be used as an indirect printing process. Standard black and white laser printers are capable of printing on plain paper using a special "transfer toner" containing sublimation dyes which can then be permanently heat transferred to T-shirts, hats, mugs, metals, puzzles and other surfaces.

The dye-sublimation printing process is used to print on polyester or other synthetic fabrics. It is used for applications such as T-shirts, banners, table covers, id cards, sportswear and flags. The original printers were an electrostatic technology using toners but now are generally large format inkjet printers using specially formulated inks. The dye sublimation inks are a pigment suspended in a liquid solvent, like water. The images are initially printed on coated heat-resistant transfer paper as a reverse image of the final design, which is then transferred onto polyester fabric in a heat press operating at a temperature around 180 to 210 C (375 F). Under high temperature and pressure, the dye turns into a gas and permeates the fabric and then solidifies into its fibers. The fabric is permanently dyed so it can be washed without damaging the quality of the image.

Advantages of dye-sublimation over other methods of textile printing:[1]

As dye-sublimation printers utilise heat to transfer the dye onto the print media, the printing speed is limited by the speed at which the elements on the thermal head can change temperature. Heating the elements is easy, as a strong electric current can raise the temperature of an element very quickly. However, cooling the elements down, when changing from a darker to a lighter color, is harder and usually involves having a fan/heatsink assembly attached to the print head. The use of multiple heads can also speed up this process, since one head can cool down while the another is printing. Although print times vary among different dye-sublimation printers, a typical cheap home-use dye-sub printer can print a 6" x 4" photo in 45 – 90 seconds. More heavy-duty printers can print much faster; for example, a Shinko CHC-S-2145 dye-sublimation printer can print a 6" x 4" photo in as little as 6.8 seconds. In all cases, the finished print is completely dry once it emerges from the printer.

Due to the fast development of digital textile printing, dye sublimation inks are becoming more and more popular in digital inkjet printing on fabrics.