Maksimir
This article is about the Zagreb district. For other uses, see Maksimir (disambiguation). 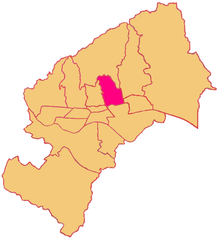 Maksimir as a part of Zagreb

Maksimir (pronounced [mǎksimiːr]) is one of the neighborhoods of Zagreb, Croatia. Maksimir stadium and Maksimir Park are located in it. It was named after the bishop Maksimilijan Vrhovac.

The center of the Maksimir neighborhood is the Kvaternik Square, named after Eugen Kvaternik and frequently dubbed "Kvatrić". The square has recently been renovated and redesigned to alleviate major traffic congestion. The new square includes an underground parking garage. The local newspaper is called "Maksimir, moj kvart" (English: Maksimir, my neighborhood).

The Maksimir Park is one of the biggest parks in Zagreb. It also contains the Zagreb Zoo, which is the second-largest in Croatia; and five lakes, called the Maksimir lakes.