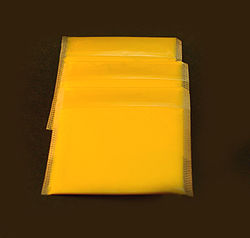 American cheese is a processed cheese. It is orange, yellow, or white in color and mild in flavor, with a medium-firm consistency, and melts easily. American cheese was originally only white, but is usually now modified to yellow. In the past it was made from a blend of cheeses, most often Colby and Cheddar. Today’s American cheese is generally no longer made from blended cheeses, but instead is manufactured from a set of ingredients[1] such as milk, whey, milkfat, milk protein concentrate, whey protein concentrate, and salt. In the United States[2] and the United Kingdom[citation needed], it may not be legally sold as "cheese", and must be labeled as "processed cheese", "cheese product", or similar; it is commonly referred to as "plastic cheese" or "burger cheese" in the UK.[citation needed]

American cheese is used in American cuisine, for example on cheeseburgers, in grilled cheese sandwiches, and in macaroni and cheese.

British colonists made cheddar as soon as they arrived in America. By 1790, American cheddars were being exported back to England. The British referred to American cheddar as "American cheese", or "Yankee cheese", and post-Revolution Americans promoted this usage to distinguish their product from European cheese.[4] For example, an 1878 newspaper article in The New York Times lists the total export of American cheese at 355 million pounds per year, with an expected growth to 1,420 million pounds.[5]

Originally, the English considered American cheese inferior in quality; still, it was cheap, so it sold. This connotation of the term American cheese became entrenched in Europe. "American cheese" continued to refer to American cheddar until the advent of processed cheese. Americans referred to their cheddar as "yellow cheese" or "store cheese", because of its popularity and availability.[4] By the 1890s, once cheese factories had sprung up across the nation, American cheddar was also referred to as "factory cheese". And in the 1920s another slang term arose for the still popular cheese: "rattrap cheese", or "rat cheese".[6]

The Oxford English Dictionary defines American cheese as a "cheese of cheddar type, made in the U.S." and lists 1804 as the first known usage of "American cheese", occurring in the Frankfort, Kentucky newspaper Guardian of Freedom. The next usage given is in 1860 by Charles Dickens in his series The Uncommercial Traveller.[7]

During the summer months of 1942, U.S. officials imposed severe restrictions on cheese consumption as a wartime conservation measure.[8] These restrictions disallowed the sale or consumption of all types of cheese other than American cheese. This was due to a combination of factors: paucity of availability of cheese from continental Europe, abundance of the American variety, and a perceived need to encourage wartime patriotism among citizens. The ban took effect on May 4, 1942.

The public response to the ban was immediate and noticeable. Importers of British cheese claimed that it damaged morale in both countries, and represented a lack of solidarity in the war effort on the part of the USA. For these reasons and others, the ban was rescinded without opposition on August 1, 1942.[9]

The taste and texture of different varieties of American cheese vary considerably, and mostly depend on the percentage of cheese versus additives used during emulsification. Varieties with lower percentages of additives tend to taste more like unprocessed cheese. Depending on the food manufacturer, the color of the cheese (orange, yellow, or white) may indicate different ingredients or processes. Some manufacturers reserve the white and yellow colors for their less processed[citation needed] (i.e. fewer additives) American cheese varieties. In other cases[citation needed], the ingredients for white and orange colors are the same, except for the coloring. However, this does not necessarily mean that even these white and orange cheeses have exactly the same flavor and texture because the spice annatto, which has a subtle but noticeable taste, is often used for coloring American Cheese.[citation needed]