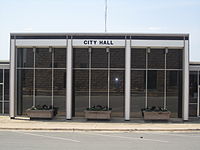 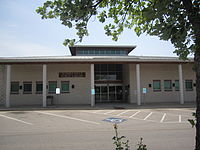 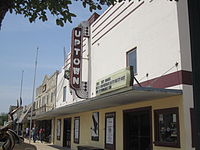 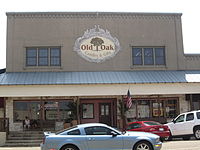 Old Oak is among gift shops in downtown Marble Falls. 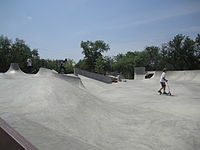 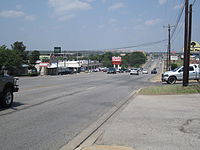 Marble Falls is a city in Burnet County, Texas, United States. The population was 4,959 at the 2000 census.

Marble Falls is about 45 miles (72 km) northwest of Austin and 85 miles (137 km) north of San Antonio. Lake Marble Falls is part of the Highland Lakes, the largest chain of lakes in Texas.[3]

Due to its location in the middle of the Texas Hill Country and the Highland Lakes, Marble Falls is a popular vacation destination for watersports enthusiasts, boaters, fishermen, campers, and hunters. Marble Falls also hosts one of the largest drag boat races in the United States each August.

The city's slogan is: Marble Falls... for a weekend, or a lifetime.[5]

Marble Falls was founded in 1887 by Adam Rankin Johnson, a former Indian fighter and Confederate general, known as "Stovepipe" Johnson for his American Civil War escapades, which included duping the Union army in Newburgh, Indiana, with fake "cannons," constructed from stovepipes and wagon wheels. Johnson had viewed the natural Marble Falls during his pre-war days as a Burnet County surveyor, and had dreamed of building an industrial city, powered by the tumbling Colorado River, not to be confused with the river of the same name in Colorado and Arizona. Despite a "friendly fire" incident which blinded him near the end of the Civil War, General Johnson followed through with his dream, facilitating the construction of a railroad to nearby Granite Mountain in 1884, then (with ten partners, including one son, one nephew and two sons-in-law) platting the townsite and selling lots, beginning July 12, 1887. Johnson built a fine home, a college (soon to be home of the "Falls on the Colorado Museum") and a large factory near the falls. The town grew to a population of 1,800 within ten years.

Marble Falls made history in 1917 by electing Ophelia Crosby "Birdie" Harwood as the nation's first woman mayor, three years before women were allowed to vote!

When the Max Starcke Dam was completed in 1951, the marble falls which had given the town its name were submerged under the new Lake Marble Falls. While the town's economy struggled through the drought of the 1950s, a new economy based on tourism and retirement began to grow in the 1970s. During the last thirty years, Marble Falls has grown into the retail and entertainment center for the Highland Lakes area, and continues to attract tourists, retirees and new businesses.[6]

The town is located on the banks of Lake Marble Falls. According to the Handbook of Texas website, the former falls were flooded by the lake, which was created by a shelf of limestone running diagonally across the Colorado River from northeast to southwest. The upper layer of limestone, brownish on the exterior but a deep blue inside, was so hard and cherty it was mistaken for marble. The falls were actually three distinct formations at the head of a canyon 1.25 miles (2.01 km) long, with a drop of some 50 feet (15 m) through the limestone strata. The natural lake and waterfall was covered when the Colorado River was dammed with the completion of Max Starcke Dam in 1951. A photo of the falls as they once existed can be seen at the local bed and breakfast website for the[7] Lake Marble Falls sits between Lake LBJ to the north and Lake Travis to the south. The falls for which the city is named are now underwater but are revealed every few years when the lake is lowered.

Equally noteworthy is the huge igneous batholith called Granite Mountain looming on the towns' western edge that secured Marble Falls' place in Texas history. The famed pink granite was used for the construction of the Texas State Capitol, and can also be found in the Galveston Seawall and Austin-Bergstrom International Airport.[8]

There were 1,931 households out of which 35.1% had children under the age of 18 living with them, 47.1% were married couples living together, 14.3% had a female householder with no husband present, and 34.4% were non-families. 29.8% of all households were made up of individuals and 13.2% had someone living alone who was 65 years of age or older. The average household size was 2.51 and the average family size was 3.10.