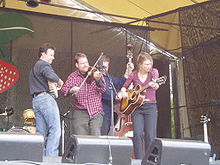 Martha Scanlan is a bluegrass singer-songwriter. She is originally from Minnesota and has been featured on the Woodsongs Old-Time Radio Hour[1] and the Cold Mountain soundtrack (as a member of the Reeltime Travelers).