The Municipality of Concepcion is a 4th class,[1] coastal municipality in the province of Iloilo, Philippines. As of 2007, it had a population of 36,881.[2]

The largest of the 16 islands is Pan de Azucar Island (1840 hectares) which has 573 meter Mount Manaphag rising from its center.[4]

The primary industry of the people of Concepcion is in fishing.[3] The Visayan Sea, where Concepcion is situated, is one of the most prolific in fish production and provides a significant proportion of fish in the region. As of 2007, the number of registered fishermen stands at 7,957.[2] Fishing is followed second by farming, with much of it being subsistence farming. The principle cash crops are rice, corn and vegetables,[3] along with bamboo and coconuts. Poultry and livestock are raised for local consumption.[3]

Poverty incidence was extremely high in the early 21st century, with 87% of the population being below the government poverty line in 2000,[3] with a reduction to 47% in 2004.[5] A contributing factor was the rapidity of population growth in the municipality, with a growth rate of 2.76% (as of 2002), or four babies being born every day in the municipality.

There is one institution of higher learning in the municipality, Concepcion Polytechnic College, which offers bachelor's degrees in fisheries and agriculture, as well as a masters in public administration.[3]

The annual Tampisaw Festival, held the fourth week of April[6] on four of the islands, attracts tourism.[5] 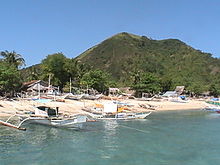