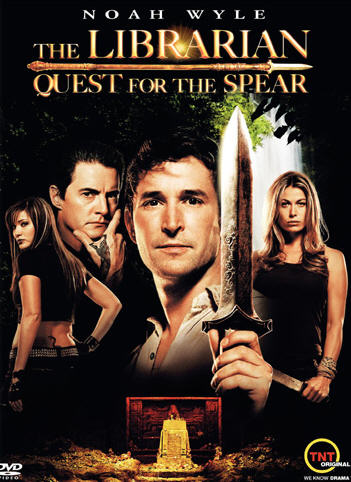 "The Librarian" is a series of made-for-TV original movies from TNT starring as a librarian who protects a secret collection of artifacts.

"Quest for the Spear" introduces Flynn Carsen () who is hired by the Metropolitan Public Library as a librarian. What Flynn doesn't realise is that the library has existed for centuries and protects a range of historical and often magical items in a secret section of the library, including , , and . When part of the is stolen from the library, Flynn must recover it with the help of Nicole Noone.

"Return to King Solomon's Mines" begins with Flynn attending a party at his mother's house where he mets up with his "Uncle" Jerry, a close friend of his late father. Soon Flynn is on a quest to locate King Solomon's Mines, and along the way he teams up with Emily Davenport, an archaeologist who helps Flynn translate the Akon language. When they meet up with Jerry in Kenya all is not what it seems...

The Librarian: Curse of the Judas Chalice (2008)

"Curse of the Judas Chalice" finds Flynn suffering from a series of strange dreams which led him to New Orleans, where he finds himself in the midst of uncovering a conspiracy that involves the notorious vampire Prince Vlad Dracul. Once again, Flynn must overcome his fears and protect one of the world's most sacred artifacts, the Judas Chalice, or face the consequences of it falling into the wrong hands.

Released in November 2006, Electric Entertainment and Atlantis Studios produced a a graphic novel adaptation of 'Return to King Solomon's Mines'. The adaption was written by James Watson and illustrated by Nate Pride. Atlantis Studios has a [http://www.atlantisstudios.net/librarian/ website] for the adaption.

Electric Entertainment and Atlantis Studios additionally signed an exclusive worldwide agreement to produce an original comic book series based on the Librarian characters. “Comics are great opportunities to explore mythology, history, and each character in a way we could never do on film” said Executive Producer Dean Devlin, “There are thousands of artifacts in the Library – each one a new adventure. Based on the response we’ve had from the first film, fans of all ages loved the characters and want to see more. This series will give it to them.” [ [http://www.comicbookbin.com/news557.html Electric Entertainment & Atlantis Studios to Produce "Librarian" Comic] ]

"Quest for the Spear" introduced the main characters of The Librarian franchise, including Flynn Carsen (the main protagonist), Margie Carsen (Flynn's mom), Charlene (a library employee) and Judson (the head librarian). Other characters that appeared in the first movie include; Edward Wilde (the previous librarian) and Nicole Noone (the librarian's protector). In "Return to King Solomon's Mines" Flynn's "Uncle" Jerry was introduced as well as female sidekick Emily Davenport. In "Curse of the Judas Chalice" we meet Professor Lazlo and Simone Renoir.

The Librarians are the guardians of powerful and magical relics, and have been for centuries, and often undertake global-spanning adventures to recover items and store them in the Library. Some of the relics in the library include; the , the , and Pan's Flute.

The Librarian: Quest for the Spear